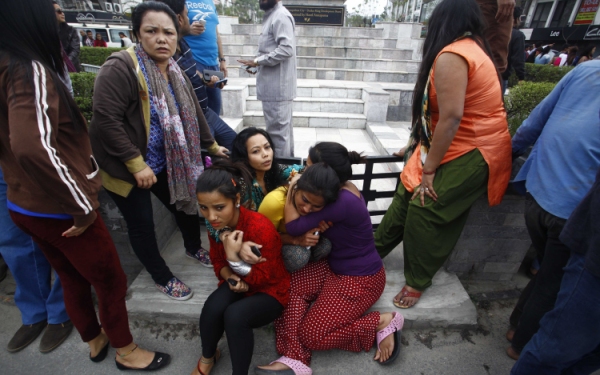 KATHMANDU, Nepal — Aid efforts ramped up in Nepal on Monday as the country tried to recover from the weekend’s earthquake, but thousands prepared for another night in the open as the official death toll climbed past 3,800.

The Interior Ministry said 3,837 had died and around 6,800 people had been injured in Saturday’s 7.8-magnitude quake.

Besides of fear caused by numerous aftershocks, people camping in open spaces were suffering a combination of rain, hunger and thirst.

“There is no space. So at least 50 people are crammed in an open area in our neighborhood,” said Pramod Karki, who was staying in a camp near his house in the capital’s Kalanki district.

“Lightning and thunder. Haunting feel to the city, yet tens of thousands — or most of city — out on streets, under tarps,” Kathmandu-based writer Kashish Das Shrestha tweeted.

Hospitals damaged by the quake were treating patients in improvised outdoor clinics, while streets near Kathmandu’s Teaching Hospital were lined with vehicles as people continued to bring the injured.

Chief Secretary Lilamani Poudel asked all government employees and bodies to work to help the injured and the displaced.

Mass cremations were being held in some places in the capital, with the government saying they were a necessary measure to prevent disease from spreading.

The Tourism Ministry said it was also focusing on rescuing the foreigners trapped around the country, including people on climbing expeditions.

“We rescued around 82 people from the Everest base camp yesterday,” ministry secretary Suresh Man Shrestha said.

“There are 18 dead bodies on Mount Everest, but we brought down only the wounded. Hopefully there will be no more casualties.”

“We are also using smaller helicopters and those from the Indian army too for rescue. We are focused on the Everest region and on Gorkha, Dhading, Nuwakot and Sindupalchowk districts.”

Dramatic footage emerged from Everest on Monday, showing an avalanche rise like a cloud of smoke and then crashing down and engulfing the campsite.

“We have mobilized 90 percent of our resources,” said military official Jagdish Chandra Pokharel. “We’re working on a war footing and we request people to do what they can to help people around them.”

Prime Minister Sushil Koirala said authorities were struggling with their limited capacity to respond to the crisis, he said.

The government has only six helicopters, with 20 other helicopters in private hands. Among the aid promised by neighboring India are two dozen aircraft and helicopters, according to media reports.

“We are expecting more foreign help now and now need to work on cremating people, on sanitation, on clean drinking water,” Koirala said.

Efforts were also under way to fix phone lines and restore power on Monday, he said.

Aid from around the world was arriving or being promised.

India had so far dispatched 400 tons of relief materials and basic supplies, according to the Indian embassy in Kathmandu. Pakistan had set up temporary medical camps.

Chinese rescue teams began searching for victims and survivors in the capital.

The Asian Development Bank pledged up to $200 million in credit for the first phase of rehabilitation. The bank said it is sending $3 million as a grant for tents, medicines, food and drinking water.

Fourteen of the European Union’s 28 member states have offered to send first aid teams and equipment, a spokeswoman for the bloc’s executive said.

There was also high-tech help from Facebook and Google, which added functions to their online platforms to help people find friends and relatives caught in the quake.