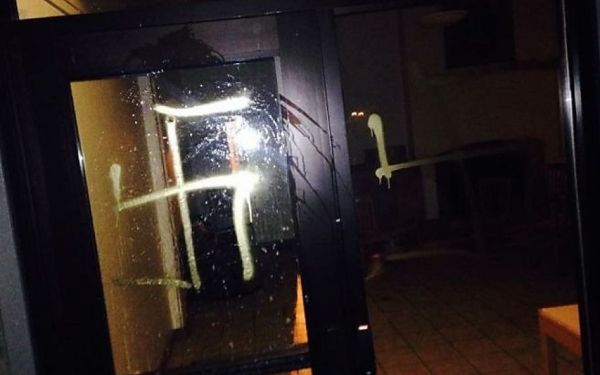 Stanford University is investigating a series of hate-fueled graffiti, including swastikas, found at student housing units and a fraternity house on campus.

Swastikas and anarchy symbols were spray-painted early Sunday at the BOB house for students transitioning out of dorm life, Sigma Alpha Epsilon fraternity and Casa Italiana, an Italian language and culture-focused academic house, according to university spokeswoman Lisa Lapin.

No arrests have been made in connection to the graffiti, she said.

Stanford President John Hennessy condemned the vandalism as an act of hate “that has no place at Stanford.”

“I am deeply troubled by the act of vandalism, including symbols of hate, that has marred our campus,” he said in a statement.

University administrators as well campus police will investigate the vandalism as part of its protocol for investigating real or perceived acts of intolerance.

The vandalism will be investigated as a hate crime, said Stanford police spokesman Bill Larsen.

“This level of incivility has no place at Stanford,” the university president said. “I ask everyone in the university community to stand together against intolerance and hate, and to affirm our commitment to a campus community where discourse is civil, where we value differences, and where every individual is respected.”

The Sigma Alpha Epsilon fraternity chapter at Clemson University in South Carolina recently came under fire after hosting a “Cripmas” party, in which students dressed as gang members for Christmas.

Lapin said the Stanford chapter has never been the target of a hate crime before Sunday’s incident.