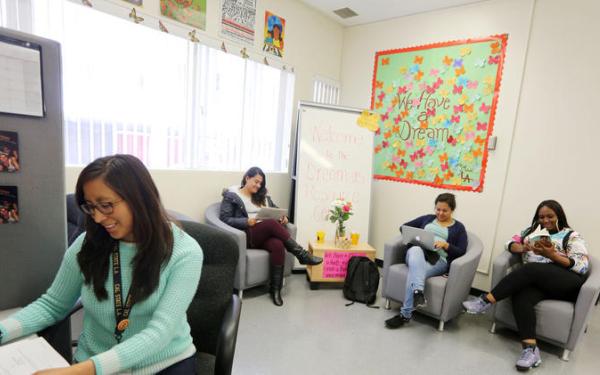 Cal State L.A. on Monday announced a $1.6-million gift to help fund a campus resource center for students who are in the country illegally.

The donation, from Los Angeles philanthropist Erika J. Glazer, will pay for staff and maintenance of the dedicated space, which opened in October in the Students Affairs building.

The Glazer family previously donated $700,000 to fund a program that so far has awarded 36 scholarships to students in the U.S. illegally, based on academic merit, extracurricular activities, overcoming hardship and other eligibility criteria.

"Fortunately, in recent years, there is less need for private scholarships but definitely a growing need for a center where students can get help working their way through a difficult legal process and assistance in powering through a four-year university on time," Glazer said in a statement. "My hope is that this resource center will be obsolete in a few years and the funds can go toward other programs at Cal State L.A."

As of fall 2014, an estimated 850 Cal State L.A. students qualified for in-state tuition under AB 540, officials said. The campus had no information on the overall enrollment number of students in the country illegally.

"Cal State L.A. is grateful for the generous support we have received from Erika J. Glazer and her family," said President William A. Covino. "Her gift helps keep the promise of higher education alive for Dreamer students."

Cal State campuses in Fullerton and Long Beach also have opened so-called dream centers, and Northridge has one in the works. Recently proposed legislation would support establishing more such centers in the 23-campus Cal State system and in community colleges.

Cal State L.A. political science major Jose Guevara was born in El Salvador, came to the U.S. without documents when he was 10 years old and now works as an advisor at the center. More than 700 students came through the door last quarter, he said.

"Our dream center is one of the biggest ones, and we are very fortunate to have a private donor to fund it," said Guevara, 21, who also received a scholarship from the Glazer family. "We are a one-stop shop for students ... and it's important that they have a space where they can feel safe."

Campus News
California State campuses with most COVID-19 cases have one thing in common – they like to party
1,648 views