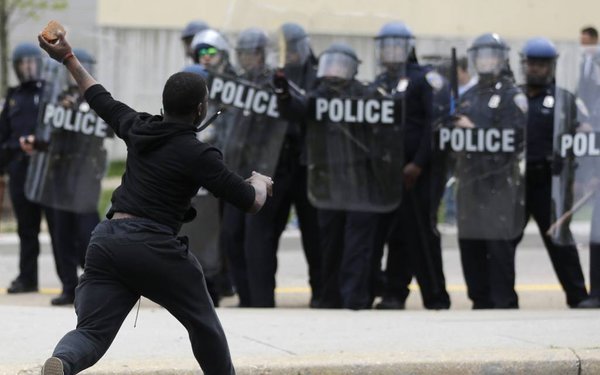 A man throws a brick at police Monday, April 27, 2015, following the funeral of Freddie Gray in Baltimore. Gray died from spinal injuries about a week after he was arrested.
(Credit: AP Photo/Patrick Semansky)

A nation's long-simmering tensions over inner-city policing boiled over in the streets of a major American city yesterday, as large bands of black youths roamed the streets of Baltimore, hurled rocks at cops, set police cruisers and then a city block on fire, and looted stores in the biggest U.S. urban uprising in more than two decades.

Just moments after an emotional funeral for Freddie Gray, the 25-year-old black man whose death from a broken spinal cord after an encounter with Baltimore police shook the city and the nation, the streets erupted in pent-up rage laced with criminal opportunism.

TV news helicopters captured stunning scenes that at times looked more like the occupied West Bank than an East Coast U.S. city, as teens - some with faces covered with bandannas - hurled stones and other bric-a-brac at officers just a few feet away and shattered windows of police cruisers that whizzed past.

As darkness fell, Maryland Gov. Larry Hogan declared a state of emergency and activated the Maryland National Guard, while the Baltimore Orioles canceled their night game against the Chicago White Sox scheduled at Camden Yards, outside of which a demonstration had taken place Saturday.

It was unclear whether a massive fire on the east side of the city, at the site of senior-citizen housing under construction just a few blocks from Johns Hopkins Hospital, was related to the unrest.

Officials said that 15 police officers suffered injuries in the roving melee - much of which took place several miles from the Inner Harbor, in some of America's poorest ZIP codes. Two police officers were hospitalized. No deaths were reported, and it wasn't immediately known how many civilians were hurt, but at least 27 were arrested.

But the statistics didn't do justice to the startling and sometimes violent images that were broadcast to the nation beginning in midafternoon. The unrest started as Gray's funeral ended and schools had let out for the day, with the first reports of chaos and looting involving 75 to 100 "school-age kids" coming from the popular Mondawmin Mall in northwest Baltimore.

TV helicopters captured video of one band of about 50 youths stomping on a police cruiser and smashing in its windows, as well as another police cruiser engulfed in flames. Masses of looters broke into a large CVS drugstore, eventually setting it ablaze, and thick, black smoke billowed into the afternoon gloaming.

An unknown number of other retailers, including a liquor store and a check-cashing service, also were looted. Torn-up mannequins littered the glass-strewn street outside the downtown Lexington Market - one of many scenes that recalled iconic photos of the urban riots that ripped America apart during the 1960s.

"People are very emboldened right now," Baltimore Sun crime reporter Justin Fenton said last night on CNN, just as a camera showed groups of youths hurling projectiles at speeding police cruisers and shattering at least one window. "They are not afraid of the police."

Baltimore Mayor Stephanie Rawlings-Blake declared a 10 p.m. to 5 a.m. curfew to last a week or longer. "What we see tonight going on in our city is very disturbing," the mayor said, reading a statement. "It is very clear there is a difference between what we saw over the last week with the peaceful protests - those who seek justice, who wish to be heard and want answers, and . . . the thugs who only want to incite violence and destroy our city."

"We run this city!" a group of about seven teens yelled at police officers, according to TV news cameraman Paul Gessler. The smell of burned rubber wafted in the air in one neighborhood where youths were looting a liquor store. Police stood nearby as people drank looted alcohol, while firefighters trying to extinguish the large CVS fire were thwarted as a vandal slashed their hose with a knife - another act captured on live TV.

It was supposed to be a solemn day in Baltimore. Thousands had packed the New Shiloh Baptist Church to bid goodbye to Gray, a once-anonymous resident whose tragic and mysterious death placed him on a growing roster of names synonymous with the uproar over policing and black males in America - Walter Scott, Michael Brown, Eric Garner, Tamir Rice.

About two weeks after Gray's police encounter and a week after he succumbed to his injuries - suffered either during his arrest or in a rough, unbuckled van ride afterward - Baltimore officials suspended six police officers but have not explained either exactly how he died or even why he was arrested in the first place.

At the funeral, attended by the Rev. Jesse Jackson and other dignitaries, the Rev. Jamal Bryant gave a rousing and spirited eulogy that received a standing ovation in the crowded church.

Bryant said Gray's death would spur further protests, and he urged those in the audience to join.

Even as Bryant spoke, police in riot gear began to congregate - motivated, authorities said, by what was described as "a credible threat" of gang violence against law-enforcement officers. A short time later, as rioting spread across several neighborhoods, Bryant and other ministers called for calm and organized a peace march in west Baltimore, to little avail.

The tense night came 47 years after the worst modern riot in Baltimore history, when the Rev. Dr. Martin Luther King Jr. was assassinated in April 1968. That riot resulted in six deaths and left much of the city in flames before National Guard and regular Army troops restored order, and it made a name for Maryland's then-governor, future Vice President Spiro Agnew.

Another prominent Baltimorean who called for an end to last night's violence was writer David Simon, creator of the iconic TV show "The Wire."

"There was real power and potential in the peaceful protests that spoke in Mr. Gray's name initially, and there was real unity at his homegoing today," Simon wrote on his personal website. "But this, now, in the streets, is an affront to that man's memory and a dimunition [sic] of the absolute moral lesson that underlies his unnecessary death."

Although no one welcomed violence, others tried to place the unrest in the broader context of the struggles of an East Coast port city that lost tens of thousands of blue-collar jobs as the Industrial Revolution came to an end, was ranked in a recent CBS News report as the sixth-poorest big city in America, and - thanks both to reality and two hit fictional TV shows, "The Wire" and "Homicide: Life on the Streets" - is synonymous with rampant murder and drug trafficking.

"Large swaths of Baltimore look like an outdoor prison," city resident Amy Webb, a prominent digital-journalism strategist, wrote on Twitter last night. "There is no green. There are no parks. The schools are concrete boxes. We have a giant new casino in a part of town where lottery tickets legitimately seem like the only way out. [The Freddie Gray story] isn't about police brutality. It's about the brutality of everyday living for many in Baltimore."

Just last fall, a sweeping investigation by the Baltimore Sun revealed that the city had paid out a whopping $4.6 million just since 2011 to settle claims of police brutality or civil-rights violations that had been lodged by more than 100 citizens, most of them black and most who were never convicted of crimes. Some saw those tensions underlying the anger over Gray's killing.

But - much like what happened in the 1960s and 1970s - the wider conversation about Baltimore's deeper social problems and police abuses may get swamped by immediate anger and condemnation of violence and looting.

"This is not justice," Freddie Gray's cousin Carron Morgan told Baltimore Sun reporter Kevin Rector last night at the height of the unrest. "This is just people finding a way to steal stuff."

- The Associated Press contributed to this report.