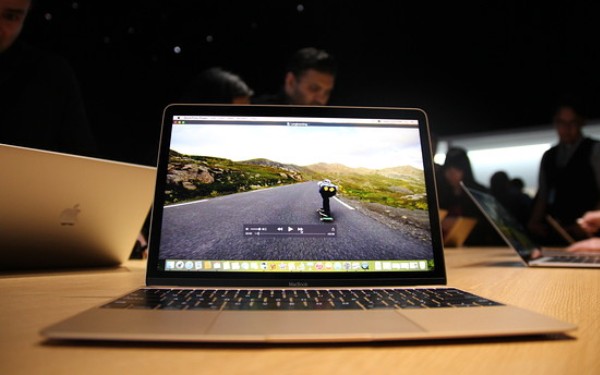 With the iMac, Apple decided people really didn’t need an optical drive built into their computers.

With the iPad, Apple decided people really didn’t need to be able to connect any peripherals at all.

A few weeks ago, Apple introduced the new MacBook (starting at $1,299), and we learned that we really only need one port that can do almost everything, but not at the same time.

My first reaction was to wonder why Apple hates us.

As users, we want the smallest, lightest laptops, but as someone who uses a MacBook Pro as my only computer, I also want it to have all-day battery life, a great screen and enough ports to connect all my peripherals.

When I get to work each day, I connect to a large monitor, an Ethernet cable and a large Thunderbolt hard drive.

I can’t do some of those things with the new MacBook.

So Apple is back to being Apple — letting me know that I might want to rethink the way I do my work.

The MacBook is Apple’s lightest and smallest laptop.

To get the size down, Apple had to think about the elements of a laptop — keyboard, screen, motherboard, battery — and redesign all of them. Not many parts of the new MacBook are familiar.

The new MacBook is about as small a laptop as I’d want to use daily.

The processor is Apple’s first use of the Intel Core M, a smaller CPU that requires less energy (and gives longer battery life) and gives off less heat (it doesn’t need a fan).

The Core M is a less powerful processor than Intel’s i3/i5/i7 family that Apple uses in its MacBook Pro line. If you just look at the CPU speed, the entry-level MacBook’s 1.1GHz processor might seem a bit disappointing.

I think Apple realizes that not everyone wants a laptop to function as a desktop, and the new MacBook is aimed squarely at the purely mobile user. The MacBook ships with 8 gigabytes of RAM, which is not user-upgradable, and either a 256 GB or 512 GB solid state drive.

The graphics are run by an Intel HD 5300 board that can drive the internal Retina display plus external displays with resolutions up to 3,840 by 2,160 pixels.

The case is 7.74 inches by 11.04 inches and just half an inch thick. Weight is just a touch over 2 pounds. Inside, the new MacBook is almost all battery. The 39.7-watt-hour battery can provide up to 10 hours of use.

The full-size keyboard runs edge to edge, and each key is lit with its own LED. The key switches are a new design with little travel to the keys as you press them. Even with my big fingers, typing is shockingly fast and light.

The trackpad is all new and has a feature called Force Touch, which allows you to press harder (a force click) to perform tasks that required multiple finger gestures before.

The trackpad is glass and has no physical button. You press on the glass, and when you press down to click, a tiny vibration simulates button movement. Force clicking provides a slightly stronger feedback. There are no moving parts on the trackpad, yet you’d swear you’re pushing a button.

The sides of a MacBook are usually full of ports.

This is where Apple’s future design takes over — the new MacBook has a standard headphone jack and one USB port. That’s it.

The USB port is the first time Apple’s used the USB-C connector, which has also appeared on Google’s new Chromebook Pixel. USB-C is going to be big, so let’s talk about what it can do.

First, it’s a tiny, oval-shaped plug that works in either orientation.

The port can do many things: provide power and battery charging, transfer data, connect peripherals and run external video.

Anything you’d want to connect to your MacBook has to connect through this one USB-C port.

When I think about there being only one port, I start to shake my head.

The MacBook ships with a USB-C cable for charging. The 29-watt charger is a small, square box a bit larger than the plug for an iPhone or iPad.

By using USB-C for charging, Apple is opening up to third-party cables and chargers. Any USB-C cable or wall charger should work if it provides at least 29 watts of power.

There are not very many USB-C peripherals on the market yet (try none), but plenty have been announced.

To connect any of your existing peripherals, you’ll need a dongle.

Notice there is no USB-C to Ethernet or USB-C to Thunderbolt. Odd.

Third-party Ethernet adapters have been announced.

Apple isn’t making it easy or convenient to connect peripherals, and I can see why: This laptop is designed to hit the road. I see all sorts of people in airports or at Starbucks using their laptops, and none of them are connected to a ton of peripherals.

The MacBook is easy to carry and use. The battery lasts all day, and it doesn’t get hot on the bottom like most other laptops.

The inclusion of the smaller, slower processor means you won’t be editing video on this Mac, but that’s not its purpose. If you want a more capable Mac, buy a MacBook Pro or even a MacBook Air.

The MacBook’s new Force Touch trackpad has already appeared on some other MacBook Pro models.

I can’t wait to see USB-C make its way to Apple’s other computers.

We can debate the decision to only include one USB-C port (two would be better, in my opinion), but Apple clearly sees the future. It’s up to us to catch up.

Cons: Only one USB-C port

Bottom line: An interesting addition to the MacBook family. I can see the usefulness, and I can’t wait to see where this design goes in the future.