Baltimore riots and the long shadow of 1992 Los Angeles 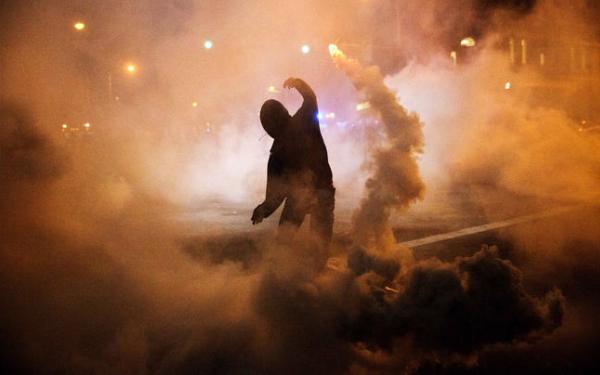 A protester throws a tear gas canister back toward riot police after a 10 p.m. curfew went into effect in Baltimore this week.
(Credit: David Goldman / Associated Press)

Twenty-three years ago, parts of Los Angeles looked something like Baltimore has in the last week, only more so. The toll in Los Angeles, after four smoldering days of mayhem that began April 29 following the acquittal of police officers in the Rodney King beating, was 53 dead, 2,000 injured, 11,000 arrested and a billion dollars in damage.

Fast-forward to the scenes of burning buildings in Baltimore, where rioting followed a funeral Monday for a 25-year-old man who died of a severed spine sustained while in police custody. The questions about whether police and firefighters could have done more to quell looting and destruction were the same ones asked back between April 29 and May 3 in Los Angeles, with no good answers forthcoming.

There’s another similarity between Los Angeles and Baltimore: Controversial use of police force on a man of color was the plunger on a powder keg decades in the making.

There’s no excusing the looting and torching we’ve seen in Los Angeles and Baltimore, and people understandably want to know how it makes any sense to destroy your own neighborhood.

It doesn’t. Some of it is just plain thuggery.

But some of it is an angry response to a system that appears to be rigged. When you become convinced that justice and opportunity are available to some and not to others, and that nothing changes from one generation to the next, it doesn’t take long before mob mentality takes over.

In Los Angeles, we saw — the whole world saw — what kicked it off, because the savage beating of Rodney King was captured on video. In Baltimore, it’s not clear exactly what happened to Freddie Gray, and it remains to be seen whether anyone other than those who took to the streets will hold the Baltimore officers accountable for what happened while Gray was in their custody.

What is known, however, is that Gray lived in a neighborhood called Sandtown-Winchester, where the unemployment and poverty rates are double the citywide average, as the Baltimore Sun reported. About one-quarter of the buildings are vacant, which is not uncommon in once-great industrial cities where kids now sell drugs amid the ruins of shuttered factories.

When I lived in Philadelphia, my jaw dropped the first time I saw entire blocks that looked like they’d been strafed, with some houses reduced to piles of brick. It was hard to believe you were still in the United States of America, where even though we are not born into equal realities, we like to believe that equal opportunity exists.

But it doesn’t, and the gap grows wider.

Sandtown-Winchester is a lot like South L.A. was in 1992 — and, for that matter, a lot like it still is.

The Baltimore neighborhood has twice as many liquor and tobacco stores than the city average. One-fourth of the juveniles living there were arrested at least once between 2005 and 2009. Domestic violence rates were the worst in the city. A quarter of the buildings are vacant, and there are three times more lead-paint violations than the city average. That last detail is of note, because Gray and his sisters were said to have suffered from lead-paint poisoning as children.

As shameful as it is to admit, we have Third World conditions here in the land of riches. It’s there in Baltimore, a short drive from the national halls of power. And it’s here in Los Angeles, the national capital of cardboard villages and mansions the size of coliseums.

The nation’s recent economic resurgence has skipped some neighborhoods altogether. But now a week of escalating civil unrest has called attention to yet another part of the country where public policy failures, as well as income and resource inequality, have crushed hope and stirred rebellion.

“Poor kids, through no fault of their own, are less prepared by their families, their schools, and their communities to develop their God-given talents as fully as rich kids,” Robert Putnam writes in his book “Our Kids: The American Dream in Crisis.”

The book is a persuasive study of the ways in which pathways to upward mobility have been barricaded in the last half-century, as wealth has become more concentrated among fewer people, squeezing out the middle class and trapping the hordes beneath them.

USC professor Ed Kleinbard makes a compelling, conscience-driven call for a reinvestment in education and the social safety net in his book “We Are Better Than This: How the Government SHOULD Spend our Money.”

“The United States has the highest poverty rate, the greatest income inequality, and the greatest wealth inequality of any major developed economy in the world,” writes Kleinbard.

Those sad realities are still on full display in the South Los Angeles that blew 23 years ago. Despite some improvement, high crime and high unemployment remain entrenched, schools face daunting challenges, public facilities are decaying, and children are growing up with shrinking odds of moving beyond the circumstances they were born into.

That inequity should have top priority in public policy conversations at City Hall and in Sacramento. It should be, as Putnam has suggested, the prevailing topic in the coming presidential campaign. The public and the media should demand nothing less.

Baltimore shouldn’t surprise us; it should remind us where we’ve been, where we stand, and how much is left undone.