Many still missing as toll for Nepal's earthquake tops 5,000 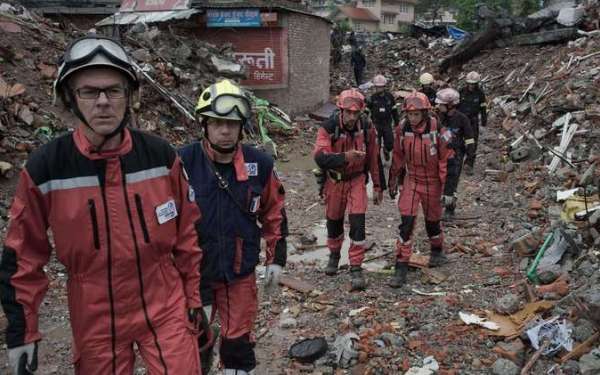 French rescue workers walk among earthquake debris as they look for survivors in Katmandu, the capital of Nepal, on April 28.
(Credit: Nicolas Asfouri / AFP/Getty Images)

With the death toll from Nepal’s massive earthquake topping 5,000 on Tuesday, police, soldiers and a Chinese rescue team searched for signs of another body as construction equipment dug deep into the wreckage of the Budget Hotel in Katmandu.

Police said about 25 people were in the five-story brick hotel Saturday when the magnitude 7.8 quake struck. At least 15 fled to safety, while one was saved from the rubble that day.

Searchers have since recovered nine bodies. On Tuesday, they were still looking for at least one more.

The missing hotel receptionist was a friend of Parwan Yadav, 21, a college student waiting anxiously among the crowd watching the recovery effort.

“In many places, people are missing still,” Yadav said.

Three days after the earthquake, the death toll in Nepal reached more than 5,000, with more than 9,000 people injured, according to a government spokesman. At least 10 of the dead were foreigners, including four Americans.

In an address to the nation, Prime Minister Sushil Koirala said Nepal would observe three days of mourning for the victims beginning Tuesday.

Koirala said the government would learn from its mistakes and institutionalize disaster management. In the meantime, he said authorities were making the most of the country’s limited resources and thanked world leaders for rushing to help them.

Aid has poured into Nepal from more than 15 nations. Rescue teams and army trucks sped past the hotel on Tuesday, and helicopters aiding the effort flew overhead.

Much of the recovery, however, still appeared to be hampered by shortages, outages, storms and the ongoing uncertainty that comes with repeated aftershocks.

About 8 million people have been affected by the quake and 1.4 million are in need of food, the United Nations said Tuesday.

A 130-member U.S. disaster response team arrived during the day to assist with the recovery efforts, bringing 45 tons of cargo. The group includes urban search and rescue teams from the counties of Los Angeles and Fairfax, Va.

The United States is providing $10 million in humanitarian assistance to Nepal, which now has 16 camps for those displaced in the Katmandu Valley.

Near the epicenter of the earthquake -- in Gorkha, about 90 miles northwest of Katmandu, the capital -- helicopters arrived Tuesday to deliver emergency supplies and evacuate the injured to clinics, according to news reports.

Gorkha has become a staging area for those sending rescuers and supplies to remote mountain areas, some reachable only by air after roads were blocked by landslides. At the Katmandu airport, helicopters arrived with both foreign trekkers and local villagers plucked from quake-struck areas.

Another landslide Tuesday in an area north of the capital popular with trekkers left 200 people unaccounted for, including 10 Nepalese soldiers, the area's chief district officer told PahiloPost, a Nepalese-language news site.

The quake triggered an avalanche on Mt. Everest that killed at least 18 climbers and guides. Mountaineering groups reported Tuesday that the last of those stranded on the mountain after the route to their base camp was wiped out had been airlifted to safety.

The Nepalese government created a hotline Tuesday to route aid where it’s most needed after residents complained they were not receiving relief fast enough.

“There is no power since Saturday afternoon, and we have only received one tarpaulin sheet where 40 families have been cramped for the last three nights,” said Bhumaeshwor Ranjit of Bhaktapur, a town six miles east of the capital, where more than 200 people were reported killed in the earthquake.

His house is among dozens reduced to mounds of bricks and splintered wood in the historic town known for its temples.

“Where is all the relief and aid material we keep hearing the authorities say they have received?” he asked Tuesday while examining earthquake damage to his house. "Looks like we will die from the absence of food and water rather than the earthquake tremors."

Hospitals serving the injured in Katmandu and neighboring areas also were starting to worry about shortages.

Government officials said they were doing the best they could under difficult circumstances.

Bodha Raj Dahal, 45, works for the country’s social welfare council in Katmandu, where some of those who fled their homes after the earthquake have camped in tents on the lawn.

On Tuesday, a tanker truck arrived and Dahal supervised the distribution of water to the displaced. He said the government agency also has distributed food to about 1,000 people camped in the gardens.

“We are trying, but how can we manage this problem?” Dahal asked. “We have no choice. We have to manage it.”

Yadav, the college student, pitched a tent Saturday with his 18-year-old twin sisters and classmates, some of whom lost their homes.

“The government can’t even provide tents -- we are managing ourselves,” Yadav said.

He and his sisters were among the better off. Their home was still standing, with no major cracks. They had planned to return there Tuesday. But Yadav, a physics major, said his sisters were alarmed by aftershocks overnight and refused to go back.

Members of his group said they have not received food from the government. Rice and noodles are in short supply, available only at a 50% markup, they said. There is no electricity in the camp, so they eat their meals from makeshift stoves. Garbage cans were overflowing.

Most nearby businesses were still shuttered -- including the Pizza Hut and Ice Cream Bell on Durbar Marg, a tourist thoroughfare still littered in places with broken glass from shattered store windows. Some of the hotels that had opened lost power and by evening did not even have generators running.

Standing outside his storefront there, Sri Rajbhandari said he had tried to reopen. But 18 of his 20 staff members lost their homes in the quake. One employee called to report that his entire village had been leveled.

“They are very desperate. They don’t even have tents there: they are living in open space,” said Rajbhandari, who runs a medical supplies business. “It’s very difficult for the staffs. They’re facing problems with food, problems with water. Water is a big crisis now.”

Police Sgt. Inspector Roshan Shah, who was supervising the Budget Hotel recovery effort, said they had brought in different types of construction equipment, a forensic expert from the Netherlands and now the Chinese search and rescue team to help find those trapped and killed.

Suddenly, a giant construction shovel stopped -- they had found something.

It was not a body. Instead the scoop dropped a backpacker's bag at the feet of police and soldiers. Recovery workers added it to a stack they plan to return to the embassies of the dead and missing.

Some of the contents spilled out into the dirt: a deck of playing cards, a red Lululemon yoga store bag, a sleeping bag still neatly packed and a Budget Hotel receipt.

The shovel went back to work for a few minutes – until a downpour and hailstorm forced police and soldiers to abandon work and seek cover under the remains of the hotel gate.

Sheltering with them, Yadav thought of his sisters and friends back in the now waterlogged tents, and so many others across the country.

“This will be more problems,” he said.