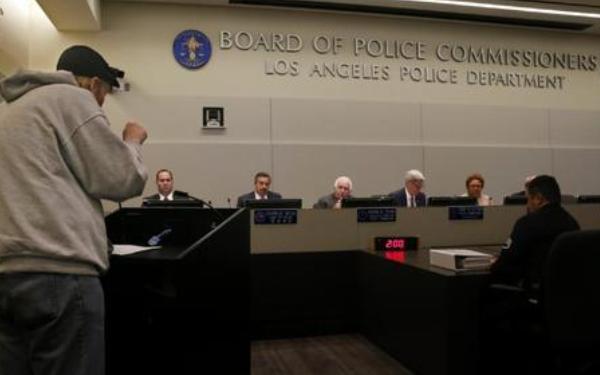 Adam Rice, with Los Angeles Community Action Network, addresses the LAPD Board of Police Commissioners with his opposition to the use of body cameras by officers.
(Credit: Don Bartletti / Los Angeles Times)

Los Angeles will become the largest city in the nation to equip all its patrol officers with body cameras, after a divided Los Angeles Police Commission on Tuesday gave its final approval during a heated debate that highlighted lingering concerns about how the cameras will be used.

The 3-1 vote that signed off on the LAPD’s rules for the devices comes as police departments across the nation are considering whether to use the body cameras to provide a better record of officers’ actions after a series of racially charged police killings.

But who will get to see the videos and when remains a divisive issue.

On Tuesday, two police commissioners got into a tense exchange over whether police officers should be allowed to review the footage before writing their reports or giving statements to internal investigators.

The American Civil Liberties Union of Southern California opposed letting officers see the videos first, arguing that the practice would give them an opportunity to shape their accounts around what the recording showed. Giving officers — but not the public — a chance to look at the footage also undermined the accountability that the cameras are intended to bring, the organization said.

But LAPD Chief Charlie Beck said allowing officers to first look at the footage would help them “get to the truth of what occurs,” a key objective of using the body cameras. Beck said he doesn’t intend to make the footage public in the vast majority of cases, citing privacy issues and the fact that they could be used as evidence in criminal or civil cases.

Over Saltzman’s objections, a majority of the commission’s members voted in favor of Beck’s recommended policy. The ACLU then dropped its support for the camera program.

“It really falls short on most of the issues that we thought a body camera policy had to address,” said Peter Bibring, a senior staff attorney at the ACLU chapter.

Commission President Steve Soboroff said he understood the concerns but believed the policy addressed many of the issues raised during the last several months and could become a model for other law enforcement agencies.

“It’s an exciting start to history,” he said. “But with that comes a really big responsibility for this department to do this correctly.”

Tuesday’s decision was a significant milestone in a roughly 18-month effort to obtain body cameras for the LAPD. Upon joining the commission in 2013, Soboroff began raising private funds to buy the devices and avoid the financial and bureaucratic restraints that have hampered the LAPD’s past attempts to expand its technology.

As the department moved forward with its plan, a series of high-profile police killings sparked a heated national debate about police, community relations and the use of deadly force, particularly against black men. The possibility of equipping officers with body cameras quickly gained traction as a way to bring more clarity to controversial police-civilian encounters, guard against officer misconduct and clear officers accused of wrongdoing.

In December, Mayor Eric Garcetti expanded the ongoing effort by announcing a plan to outfit every LAPD officer with a body camera, saying that the city would buy 7,000 devices. The LAPD crafted its policy for the cameras after seeking input from civil liberties groups, legal experts and privacy advocates, posting a survey on its website and hosting two community meetings. The department also had to conduct months of closed-door negotiations with the union that represents rank-and-file officers.

The policy calls for officers to turn on the cameras before most “investigative or enforcement” activities involving the public and encourages them to alert civilians that they are being recorded, but does not require them to obtain consent. It strictly prohibits officers from modifying the recordings and outlines several safeguards to ensure that the devices work properly.

It also requires officers to look at footage prior to writing reports. But officers involved in a serious use-of-force incident, the rules state, may be allowed to review the video only after being authorized by an investigator.

LAPD officials told commissioners Tuesday that the investigator could deny an officer the chance to review the recording if, for example, the use of force could result in a criminal investigation. Saltzman raised concerns that such an exception was not spelled out in the policy, then went on to say he did not support allowing officers to review the recordings before giving preliminary statements.

“I’m finding it quite frustrating that this policy, given the amount of time that’s gone into it, doesn’t speak to these issues,” Saltzman said.

Soboroff interjected, saying that Saltzman was “articulately saying one extreme side of this argument.”

Commissioner Kathleen Kim did not attend Tuesday’s meeting, but sided with Saltzman in a statement read on her behalf. Kim called the policy “generally sound,” but said she also had concerns that officers might try to adjust their statements based on an early review of the recordings.

And like Saltzman, Kim wanted more clarity on when and how body camera footage might be shared publicly. Although the policy specifically prohibits officers from releasing footage, it does not mention any guidelines for when the department might do so.

“Leaving it completely opaque is a mistake,” Saltzman said after Tuesday’s meeting.

A police union board member told commissioners that the group supports allowing officers to look at the footage before making a statement and called the policy “fair, reasonable and consistent” with federal recommendations and the LAPD’s current policy for cameras in patrol cars.

Commissioners requested the inspector general report within six months on how the cameras were being implemented.

Garcetti said in a statement that he was “proud Los Angeles is setting the national standard both by deploying body cameras for every officer on the street and with this carefully crafted policy.”

After Tuesday’s vote, Beck defended the new rules, telling reporters that the policy was “born from compromise” and was consistent with standards used by other agencies and recommended by the U.S. Department of Justice.

“We’ll review it after the cameras are rolled out,” he said. “If it needs to be adjusted, we’ll adjust it.”