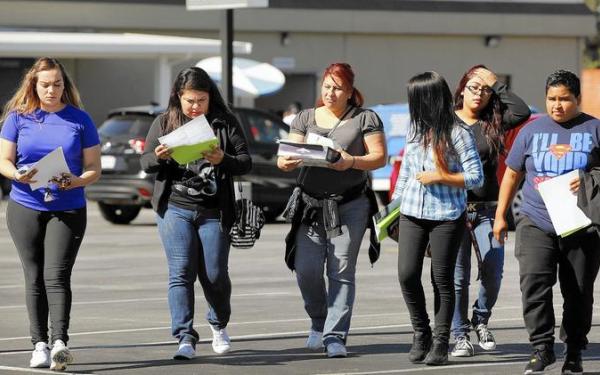 At Everest College-Alhambra, which had been abruptly shut down, students leave the campus with paperwork given to them by the State Department of Consumer Affairs.
(Credit: Al Seib / Los Angeles Times)

Two days of class and an internship were all that stood between Leticia Ruiz and a medical assisting degree — a credential she now knows she'll never get.

She had to cancel the internship interview scheduled for Tuesday with a cardiovascular physician's office in the area.

"They told me there's really no point in me going," said Ruiz, 21, who lives in East Los Angeles.

She's among 16,000 students in California and across the country who face grim choices after being displaced by the sudden closure of Corinthian's remaining campuses. A U.S. Education Department statement called it "the largest college shut-down in American history."

Like many students, Ruiz has two bad options: Either navigate the maze in transferring credits to another institution — knowing few will accept them — or apply for a federal loan refund and start over.

For many of Corinthian's nontraditional students — people raising children, juggling full-time jobs and struggling to pay bills — the collapse of one of the nation's largest for-profit college corporations has thrown another boulder into an already rocky path to a decent career.

It's only the latest obstacle they've faced since the U.S. Department of Education started cracking down on Corinthian last year amid concerns the company was falsifying job placement rates.

Some attended schools that were sold off to a new operator, giving them an opportunity to finish their education but not seek a fresh start free of debt. Others found out Sunday that they didn't have a choice of whether to finish.

The Education Department reported that at least 42% of the students in the closed schools were within six months of completing their degrees.

Higher education and student debt experts cautioned that those displaced by Corinthian's collapse should carefully consider quality before deciding to transfer to another institution.

"The automatic response is 'I need to do something right away,'" said Robyn Smith, a former deputy attorney general in California who was on a team that first sued Corinthian for fraudulent marketing in the mid-2000s, and now works with the National Consumer Law Center.

She encouraged students to "calm down, slow down, take the time to really investigate your options and make a choice that's going to make sense for you."

Because for-profit career schools such as Corinthian's tend to offer programs such as dental assisting or medical billing — without core academic classes such as English or history — their credits rarely transfer to traditional community colleges or four-year public institutions. That can mean the schools most likely to accept transfer credits are other for-profit institutions — some with dubious track records.

The Department of Education, whose investigation ultimately led to Corinthian's downfall, this week listed other troubled for-profit schools on its own website as "alternative education options" for students displaced by Corinthian.

Among those listed: ITT Technical Institute, which was sued by the U.S. Consumer Financial Protection Bureau last year for saddling students with high-interest loans, and Westwood College, which paid $4.5 million to settle charges from the Colorado attorney general's office that it misled students by inflating job placement rates.

Education Department spokeswoman Denise Horn did not respond to a question about why the department referred students to those troubled campuses.

On Tuesday morning, dozens of students streamed into and out of Everest College's closed campus in Alhambra to hear about their options for the future. Representatives from the state Department of Consumer Affairs handed out paperwork explaining how to get transcripts and financial aid records, and how to discharge loans or apply for reimbursement of out-of-pocket costs.

Officials from a half-dozen other colleges were on hand to talk about transfer options. UEI College, another for-profit college chain, was one of those on hand.

The school has offered to transfer credits for students who qualify, and is offering a scholarship of up to $1,000 for Corinthian students who enroll.

Esmerelda Tafalla, 22, came away feeling that the eight months she had spent in a medical administrative assistant program were wasted. She said she was told she might be able to transfer about 40% of her coursework to another nearby college.

"You pretty much have to start all over," she said.

David Longanecker, a former top Education Department official in the Clinton administration, said there are many reasons certain institutions don't recognize academic credits from Corinthian and other for-profit colleges — some more legitimate than others. In California, for example, he said the community college system hasn't been as focused on vocational training programs, meaning there may be fewer classes that overlap.

But he said institutions too often will not recognize credits from for-profit schools as a matter of principle.

"That's a real problem, but it's not a fair problem," said Longanecker, now president of the Western Interstate Commission on Higher Education, a regional advisory group for colleges in western states.

Even students caught up in Corinthian's downfall, however, question how much their education will be worth amid the controversy.

"That's what we're all scared of," said Erika Roque, a criminal justice student at Everest College-Ontario who was two months away from finishing. "We don't really know if it's going to be valid, if it's going to be taken by other schools or help us get a job."

Ruiz, whose last day of classes was supposed to be Tuesday, thinks transferring is the only viable option. She enrolled at Everest-Alhambra in July, after the Department of Education had begun its crackdown on the company.

All along, she said, instructors told students that the mounting scrutiny from the federal government was nothing to worry about. With a 4-year-old to care for, Ruiz said the last thing she expected was for her program to disappear before she could finish.

During the nine months she was enrolled at Everest, she worked four hours a day tutoring children in Pasadena and spent four hours at school. She said she simply doesn't have time to take a full refund and begin somewhere else.

"I was supposed to be done," Ruiz said. "To repeat it all over again is just a waste of time."