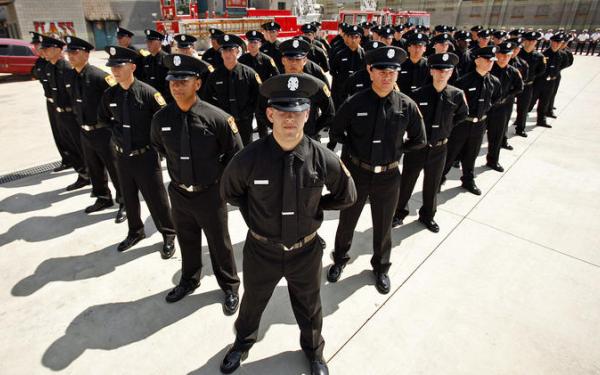 There were no women in the class of Los Angeles Fire Department recruits that graduated on June 12, 2014, above. And in the next training class, all four women recruits have been eliminated.
(Credit: Al Seib / Los Angeles Times)

All female recruits have been eliminated from the Los Angeles Fire Department training class set to graduate next month, dealing a setback to Mayor Eric Garcetti’s drive to increase the number of women in the agency’s ranks.

Last December, four women were among the 43 recruits picked to enter the grueling boot camp required to become a city firefighter. All four have left, city officials say, putting the department on track to graduate its second consecutive all-male class.

Two of the women departed due to injury and will be invited to a future training camp to attempt to manipulate heavy ladders, hoses and tools. Another failed to pass a series of physical drills that simulate a response to a fire. City officials declined to say what caused the fourth female recruit to leave.

The results show a lack of progress toward the decades-old goal of introducing more women at the LAFD, reclaimed by Garcetti last year when he overhauled the hiring process after a series of Los Angeles Times reports triggered accusations of nepotism and mismanagement.

Despite repeated calls from City Hall for reform, the percentage of female LAFD firefighters remains at slightly less than 3% — the same as in 1995. Numbers are just as low across the country.

“It's heartbreaking,” said Capt. Tamara Chick, president of a group representing female firefighters at the LAFD. “Every time one of these women gets hurt or gets fired or quits, it breaks your heart.”

Because state law forbids governments from setting hiring quotas for women and minorities, city officials say their best chance to increase their numbers is to entice more to apply.

Of the more than 10,000 applicants who took part in last year’s lottery to enter the hiring process, only 5% were women, limiting the likelihood that a large number would advance through testing and interviews to be hired.

Aides to the mayor say they are developing expanded recruiting aimed at women but have declined to provide specifics. Garcetti requested $375,000 for the task in his latest budget proposal.

At a Wednesday budget hearing, Fire Chief Ralph M. Terrazas said his goal was to use that money to double the number of female firefighters to 6% of the ranks over the next five years.

Chick said the city should also consider introducing more specific job qualifications to ensure that those best qualified to advance are selected in the lottery. Candidates currently are given no advantage if they have a college degree, previous firefighting experience or certifications like a paramedic license.

“It's one of the most desirable jobs in the world, but we have no way to choose the most qualified candidates,” she said. “It's crazy when you think about it.”

The recruits who do complete LAFD training next month will join a 3,100-member force charged with fighting fires within the city limits, as well as many less physically demanding tasks.

Those jobs can include handling 911 calls, enforcing the fire code and participating in medical rescues that have become the bulk of emergency responses.

In many other cities, officials say, those tasks are assigned to civilian employees and that, among other things, tends to result in more women being hired.

At the Oakland Fire Department, 10% of rank-and-file firefighters are female. The numbers are higher among fire inspectors and 911 dispatchers, civilians who can be hired without having to pass a rigorous physical exam.

“Our standards have been lowered since the 1970s and I would argue that's not necessarily a bad thing,” said Oakland Battalion Chief Robert Lipp. “We got rid of things you couldn't really compare to the job.”