Getting Lucky: Dumbluck's Rise From the Beach to the Stage 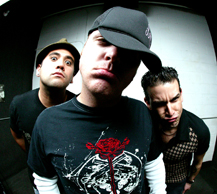 “I would have thrown on a pair of jeans without holes in them if I’d known how nice this place was gonna be,” says Jim Perkins, as he laughs and looks down at his black cotton tee and blue jeans. Sheepishly, Perkins pulls his beanie cap a bit farther down over his eyes and glances at the wine list.

“I’m just gonna chill with a pint, if that’s okay,” Perkins asks the waitress. Seated in a swanky restaurant in downtown Los Angeles, the frontman of the band Dumbluck does look a bit out of place. A thick dragon tattoo covers his forearm (“I was born in the year of the dragon”) and thin, shiny silver hoops pierce both of his earlobes.

Next to Perkins sits drummer Phil Valdovinos, whose plethora of ink and gelled, spiky black hair also exudes a certain rock star vibe. Valdovinos picks up his chopsticks and pokes at a piece of sashimi.

“I think if Sting and Robert Plant were to make love,” Valdovinos begins.

“And have a baby,” Perkins interjects.

“Prematurely!” Valdovinos chuckles, “Then that would describe our sound.”

He pauses for a moment, rolling up his sleeve to reveal more of the ethereal mermaid tattoo he helped to design, which plasters his arm.

“Honestly, I don’t know how I’d categorize our music. I know some bands are into defining their vibe before their audience gets a chance to, but that’s really not important to us. I think we try to create our own sound.”

Musically, the band offers up an exuberant stage presence. Dumbluck’s knack for involved, varied live performance has given them a distinctive reputation among the local music scene. Nationally, the band’s cover of the ‘70s Rare Earth tune “I Just Wanna Celebrate!” was aired as the theme song for the 2004 Summer X Games.

Even as young boys, the members of Dumbluck have always had a little bit of rock star in their blood. Perkins, for one, admits he used to do a mean Michael Jackson impression for his parents as a kid. As a teenager, he joined his slew of high school garage bands while listening to everything from Led Zeppelin to Run-DMC. Valdovinos, too, played in (mostly punk) bands while in and out of community college, as his musical evolution continued.

And then the guys of Dumbluck got … well, lucky. Frustrated over strings of bad band break-ups and failed record deals a few years ago, Perkins answered a local band’s advertisement which led him to Valdovinos. The two quickly formed a friendship and later formed Dumbluck with Baldaray, originally an artist who even designed the band’s logo.

“At first I just think we were just angsty as hell,” remembers Valdovinos, “but when our sound started evolving, it felt a lot more naked.”

“I immediately had this sense that it was gonna work out,” Perkins chimes in, “I had a feeling. It just … felt right, you know?”

The new dynamic apparently felt right to all three guys, who, Perkins says, really just have fun with one another.

“Nobody ever really has to check anybody else to make sure we’re staying focused. I think it’s because really, we’re all just excited to be playing music with each other! We all know what we’re here to do.”

For Dumbluck, the musical process is a collaborative one which includes, as Valdovinos calls it, “lots of roshambo.”

“The song writing process can either be very simple or really tumultuous. It just depends on the day, the season, the night,” he says.

“You change along with the music,” Perkins adds, “any poet or songwriter is going to write about really great or really crappy things. A really awesome or shitty day, a great relationship or one that gets fucked up. It’s all about being inspired … letting whatever’s going on at the time come out in the music.”

In many ways, Perkins believes, music can be quite therapeutic.

“Absolutely!” Valdovinos says, shelling a piece of edamame. “You can almost do and be anything you want to be on stage. For those short 30 minutes you’re just … exposed.”

Ultimately, the rewarding part of the musical process for Dumbluck is delivered during live performances.

“It’s that whole adrenaline rush,” Perkins gushes, “it’s addicting, like any other drug. You can get up there and yell and sing at everyone. Work everything out.”

Most recently, the guys recall the SXSW music festival in Austin, Texas as one of their favorite musical experiences.

“If you were to listen to 300 radio stations at one time, that’s what going down Sixth Street on a normal evening was like,” Valdovinos shares. “It was pretty crazy. You play certain shows and it’s easy to feel like it’s just another night. But when you do the drive and you’re in another city and everyone’s there to do the same thing … it’s a really cool vibe.”

Dumbluck hopes to expand its fan base with the release of its debut album, Sweetmilk Underground. Initially meant to be a demo, the CD soon evolved into a compilation of nearly 20 songs, which reflected changes in seasons, jobs and even girlfriends. Yet after re-focusing, Dumbluck whittled the collection down into 12 songs that the guys call a more rounded, consistent musical experience.

“I’m happy with it. I think it’s gonna be a great representation of how we’ve developed,” Perkins suggests.

It’s been a pretty interesting journey for three guys who, when all is said and done, just like to spend the afternoon with a surfboard, a brew and a guitar down by the beach. And as far as the future goes, well …

“I just like to shoot for the stars and see how far it gets us,” Valdovinos expresses. “For me, as long as I get to play music and meet people and have fun, then that’s enough for me. My ego doesn’t require fame.”

And what about the little boys with big rock star dreams?

“I got noticed in a movie theatre once,” Perkins says, his humble eyes peeking out from under his cap questioningly, “is that a rock star experience?”