Hollywood skyscraper project near quake fault is focus of hearing 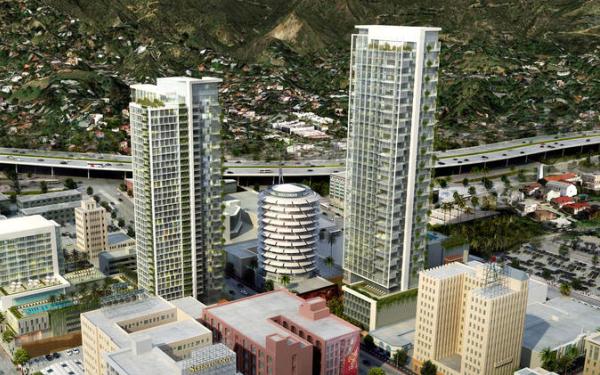 Millennium Hollywood would be anchored by 35- and 39-story buildings flanking the Capitol Records tower.
(Credit: millenniumhollywood.net)

A judge was expected to hear a civil suit Thursday that could decide whether L.A. city officials properly approved the Millennium Hollywood skyscraper project, which would bring 39- and 35-story towers to the heart of Hollywood.

The lawsuit, filed in Los Angeles County Superior Court, alleges the city failed to disclose important information on how close the skyscrapers are to the Hollywood fault, which can produce an earthquake greater than magnitude 7.0, in documents prepared before the City Council approved the project in 2013.

In the suit, lawyer Robert Silverstein accused the city and the developer’s attorneys of knowing “that the Hollywood fault might cross the property -– yet this information was never ultimately disclosed or discussed" in the environmental impact report.

In November, the California Geological Survey issued a map showing the fault line running under the site of what would be the tallest and largest development in Hollywood history. The developer has called the map incorrect, and has said it would undertake testing requested by the city to investigate any seismic concerns.

The city of Los Angeles and the developer, Millennium Hollywood LLC, are jointly defending the project's approval. They say "the record demonstrates the city's scrupulous oversight of seismic risks" and that officials have "imposed strict requirements to avoid any risk that the project could be constructed on an active fault."

California law generally bans new buildings on an active earthquake fault because of the risk to public safety. Buildings straddling a fault can be torn apart as one side of the fault moves away from the other.

Developers want to build the two skyscrapers as part of a project that would add 1 million square feet of housing, hotel rooms, offices, restaurants and stores, transforming land littered with parking and rental car lots into a new urban hub for Hollywood full of workers and shoppers in a project that could be worth as much as $1 billion.

The development has come under criticism for being too large and out of step with Hollywood's character, for how it might affect city views and for concerns about traffic congestion around the 101 Freeway.

The city and developer said two traffic studies concluded that "impacts on the 101 Freeway would be less than significant," and that the project preserves the Capitol Records building and would create a new anchor that would revitalize historic downtown Hollywood.

The project's critics are asking the judge to require a new review of the project in light of its proximity to the Hollywood fault.

Opponents of the project include the Beachwood Canyon Neighborhood Assn., which represents an area of the Hollywood Hills just north of the proposed Millennium site, and a group called Communities United for Reasonable Development.

If the city and Millennium Hollywood prevail in the civil case, whether the project will go forward will still be up to the Los Angeles Department of Building and Safety. As concerns about seismic safety have mounted, Mayor Eric Garcetti has said he would rely on government experts to determine whether the city should issue permits to allow skyscrapers to be built.

Members of the City Council championed the project when it passed in 2013 on a 13-0 vote. City Councilman Mitch O'Farrell said on the day of the vote that the project would create jobs and new tax revenue for the city and draw new residents and tourists to Hollywood's eastern edge.

The judge, James C. Chalfant, could offer a ruling or tentative ruling as soon as Thursday, following oral arguments by lawyers on both sides.