Street corner torched in L.A. riots may get new life, at long last 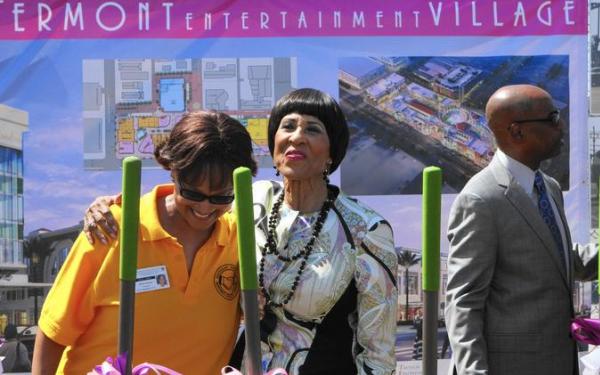 Karen Lawrence, left, and Dr. Betty Price at a groundbreaking ceremony Wednesday at the corner of Vermont and Manchester avenues, where an entertainment district is planned.
(Credit: Cheryl A. Guerrero / Los Angeles Times)

Twenty-three years ago, a mob fueled by rage after four Los Angeles Police Department officers were found not guilty in the beating of Rodney King torched the intersection of Vermont and Manchester avenues.

The ABC Swap Meet — a hub of dreams realized by entrepreneurs who hawked clothing, music and other goods — was first on the South Los Angeles corner to catch fire.

Dozens lost their livelihoods. Some business owners were able to protect their shops, not leaving until the National Guard arrived, sure then that their property would be safe.

In total, 22 structures burned to the ground in the vicinity of Vermont and Manchester. Politicians vowed to rebuild, but the lot where ABC stood festered like an open wound.

The corner became a battleground for city leaders and anti-development community groups. Efforts to use the space for an affordable housing complex, as well as a $50-million commercial development, were stymied. Grass pushed through the concrete at the football-field-sized plot.

Now, however, plans are underway for a $100-million entertainment district on Vermont between 84th Street and Manchester. City officials hope that a new supermarket, pharmacy and other retail shops will revitalize the area.

At Wednesday's groundbreaking ceremony, some residents were full of hope. Others, including City Councilman Bernard C. Parks, had a more measured response.

"What I've always been reluctant to do is have groundbreakings," said Parks, who represents the area. "Because, you know, you have 10 times more groundbreakings than ribbon cuttings. … But today, I think, we have really a project that is going to happen."

Resident Dana Gilbert said he hoped this project would not become another empty promise.

He keeps a copy of a June 16, 1992, newspaper clipping with a photo showing him with then-Mayor Tom Bradley touring the burned-out buildings. Gilbert said he remembered all the grandiose plans, none of which came to fruition.

In 1994, then-City Councilman Mark Ridley-Thomas and Rep. Maxine Waters fought over what to do with the blighted lot. Waters envisioned a pedestrian-friendly commercial thoroughfare like Old Town Pasadena or Santa Monica's Third Street Promenade. Ridley-Thomas wanted affordable housing, a senior citizens' housing complex, an alternative high school and a mini-City Hall — all which eventually were built elsewhere nearby.

Two years later, anti-development activists sued L.A.'s Community Redevelopment Agency to block it from using eminent domain to seize the land for future development. The battle dragged on for four years, with the agency eventually prevailing.

The redevelopment agency did not begin eminent domain proceedings to gain control over the lot until 2008, after talks with the owner broke down. Later, Gov. Jerry Brown dissolved the agency while it was in the process of buying the land, Parks said Wednesday.

The latest project, Vermont Entertainment Village, is scheduled to open by the end of 2016. Renderings show an open-air promenade hosting national retailers like Nike and Urban Outfitters, as well as fine dining options residents have been begging for.

"It's a dream come true," said 42-year-old Jennone Marshall, a youth director at the community group Seeking Peaceful Solutions. "I don't have to go to Citadel [Outlets in Commerce] or Santa Monica farmers market for fresh fruit. We will have this in our own community."