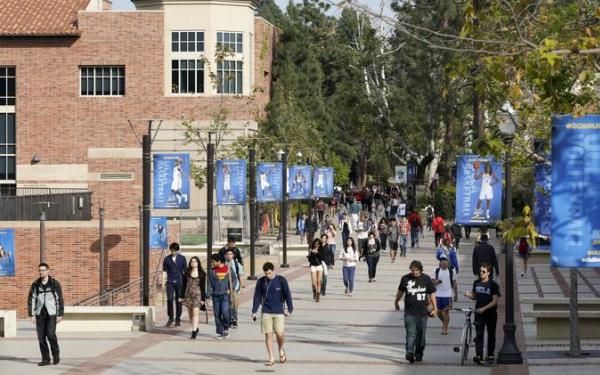 Despite progress in gaining admission to the University of California, Latino students in the state still are underrepresented compared with their overall population, and are heavily concentrated at three of the system’s 10 campuses, according to a new report.

The report released Wednesday by the Campaign for College Opportunity comes a year after UC officials announced that for the first time in history more Latinos than whites were offered freshman admission for fall 2014.

The study delves deeper into the numbers and finds cause for concern: The admission rate for Latinos is 9 percentage points lower than for whites and has declined 28% since 1994.

That compares with a 21% decline in that period for all applicants.

And while the number of Latino applicants to flagship campuses UC Berkeley and UCLA rose 350% in the last two decades, admission to those two campuses has remained fairly flat, rising by less than 2%.

Fewer than a third of Latino applicants were admitted to six of UC’s nine undergraduate campuses: Berkeley, Los Angeles, San Diego, Davis, Irvine, and Santa Barbara, according to the report.

By comparison, in 2013, 37% of Latino freshman were enrolled at the Riverside, Merced and Santa Cruz campuses, compared with 26% of all freshmen systemwide.

The report concludes that a broken remedial education system, declining investment in public higher education and restrictions imposed by Proposition 209 are hampering solid gains in education achievement for Latinos at all levels of higher education.

Prop. 209, approved in 1996, prohibits consideration of race, sex and ethnicity in public employment, contracting and education.

“It’s exactly why we believe that Prop. 209 needs to be modified and that race and ethnicity need to be factors used in admissions,” said Michele Siqueiros, president of the Campaign for College Opportunity. “Our primary focus definitely is to expand university capacity to serve more students, focusing attention on pushing the governor and policy makers to find more funding, for UC particularly.”

UC spokeswoman Dianne Klein noted that many more Latino students are graduating from high school, completing courses need to enter a four-year college and enrolling at UC than 20 years ago.

But she largely agreed with the report’s conclusion that growth and demand at UC far exceed capacity, especially for Latinos, and reiterated calls by UC President Janet Napolitano for greater state support for the system.

“We all agree that there is room for improvement,” Klein said. “Most growth will be in Latinos. They are now the largest ethnic group in California. These are the UC students of the future, or they should be.”

The report compiled data from the census, federal education statistics and information from UC as well as the Cal State and community college systems.

In other findings, only 12% of working-age Latinos in the state hold a bacherlor’s degree, compared with 42% of white adults, according to the report.

And roughly a third of all Latino undergraduates attend a California community college, where only about 39% earn a degree or certificate within six years.

Such numbers jeopardize the state’s future economy, the report asserts.

“When one in two children under the age of 18 in California is Latino, one conclusion is clear: the future of our economy and the state will rise and fall on the educational success of Latinos,” the report said.

"This report leaves no doubt that Latino college degrees are essential to meet the workforce demands of the next decade," Estela Bensimon, co-director of USC's Center for Urban Education, said in a statement. "The lack of a statewide college attainment plan with specific goals for the three public sectors puts California at great risk."

Claudia Pena said she is the first in her family to attend college and that she has struggled to navigate a complicated system since enrolling at Cypress College in 2008.

Pena, 25, had to take numerous remedial math, English and reading classes before advancing to college-level coursework, and cuts in course offerings during the recession also set her back.

This semester she also is taking classes at Long Beach City College in an attempt to complete requirements for a special associate’s degree that would provide a pathway to transfer to a Cal State campus.

However, she is aiming for UC Santa Cruz.

“There have definitely been a lot of hurdles,” the political science major said, “but I finally see the light at the end of the tunnel.”