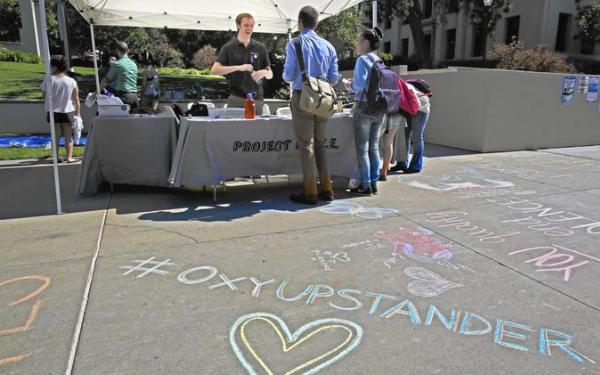 Nearly 8% of Occidental College students who responded to a survey about sexual misconduct on campus reported that they had been sexually assaulted, according to the results released this week.

About 630 undergraduates, 30% of the student body, responded to the survey. Fifty-one said they had been sexually assaulted, most of them by someone they knew during their first year on campus. About 80% of the alleged assailants had been drinking alcohol while 75% of the victims had consumed alcohol, according to the survey.

The anonymous online survey was conducted between Feb. 16 and March 13. Because the study did not use a random sample, it is difficult to draw conclusions from it, Occidental administrators cautioned.

Some politicians and sexual assault awareness advocates have cited a study that showed 1 in 5 female college students are attacked, although some academics say that number is unreliable because of the scope of the original study.

Caroline Heldman, an Occidental political science professor who has been critical of the school's sexual assault investigations and policies, called the survey flawed.

School "administrators have once again ignored faculty experts on campus who are active in efforts to develop better measures of sexual assault," she said.

Occidental is one of 57 colleges or universities that participated in the survey, which was conducted by the Higher Education Data Sharing Consortium, a nonprofit based in Crawfordsville, Ind.

The consortium did not identify the colleges that participated in the survey. The Obama administration is pushing colleges to undertake these reviews as a way to determine the extent of the problem on campus.

Occidental officials decided to release the survey now while classes were still in session because they wanted to be transparent, said campus spokesman James Tranquada. The school will make a presentation about the survey to students in the fall, he said.

The Eagle Rock campus is under investigation by the U.S. Department of Education for possibly violating Title IX, a portion of a 1972 law that prohibits discrimination on the basis of sex in all education programs and activities that receive federal financial assistance. The law requires campuses to address sexual misconduct allegations. Schools can lose federal funding over Title IX violations, although none ever have.

"While we already know that sexual assault is a problem at Occidental, the survey provides us with more information that we need to respond effectively and improve prevention education programs," said Ruth Jones, the college's Title IX coordinator.

Investigators from the Education Department also are examining whether Occidental violated the Clery Act, which calls for colleges and universities that receive federal funding to publish statistics on campus safety.

In the survey, about 60% of respondents said they believed the college will take sexual assault reports seriously. Fewer than half said they believe the school will conduct a careful investigation or take action against the offender.