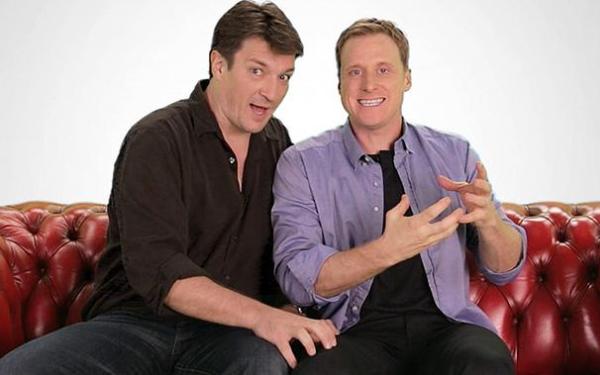 “Firefly” lasted just 14 episodes, but the 2002 Joss Whedon series still enjoys a cult following — witness the “Firefly” cast members who draw fans to comic and sci-fi conventions around the globe.

Alan Tudyk and Nathan Fillion, the latter of whom went on to fame in the TV series “Castle,” are working together on “Con Man,” a Web series set to debut this year via streaming video site Vimeo.

The premise: Go behind the scenes at science fiction conventions and show that the oddest characters aren’t the ones dressed as Stormtroopers or vampire slayers.

“Con Man” will star Tudyk as an actor relegated to the sci-fi margins, signing autographs and making appearances at fan conventions. The online show aims to explore how that affects one’s psyche — with humor.

“I’ve met a few people like that over the years going to cons,” Tudyk said. “It’s such a funny dichotomy of them being at a convention where they’re hailed as stars and then they go home to their one-bedroom apartment and they struggle to work. They want fame and fortune and all those things, but they really are successes.

“They’re a success and a failure simultaneously — a failure to themselves but a success in the eyes of their fans.”

This raises the questions, Tudyk said: “What is success? And what is happiness?”

“Con Man,” which raised more than $3.1 million in a crowd-funding campaign on Indiegogo, is shooting this spring and summer. The aim is to unveil 10 12-minute episodes in the fall and winter. Books, as well as a graphic novel and a game, are destined to follow.

Tudyk has been honing the idea for three years. Real experiences will inform the show, he said, such as the time a fan approached Tudyk at a urinal. (He mined the scene for comedy in the pitch video for Indiegogo.) Tudyk noted that was one of the few times in his career a fan was “clearly over the line.”

Tudyk sought advice from “Firefly” creator and “Avengers: Age of Ultron” director Whedon because the new series will feature a show within a show that takes some cues from “Firefly.”

Indeed, “Con Man” often puts the fans in the role of the hero, with Tudyk and Fillion far more eager to mock themselves.

Tudyk stars as Wray Nerely, doomed to the sci-fi circuit after a show titled “Spectrum” and unable to embrace fans’ love — not when Fillion, his “Spectrum” costar, has gone on to enjoy the life of an A-lister.

“A lot of fans have a stigma,” he said. “They know what people assume about them and they know what the stereotype is and they don’t want to be it. You always hear people saying, ‘I’m sorry. I’m fan-girling out! I’m sorry for fan-boying out!’ They’re always apologizing for being enthusiastic about your work. I mean, how hard is it to be nice when you are constantly meeting people being nice to you and talking about the thing you love in such a complimentary way?”

When it comes to attending a convention, Tudyk said, he’s learned lessons over the years: Try to avoid the ones in a mall. Stay away from the cons that book wrestlers. Try not to appear at events held outdoors and in tents.

And double-check what you’re being offered. Tudyk remembers one convention host being a little too accommodating.

“He wanted to make sure everyone had everything and was good. In that list, he said, ‘Do you need some drugs?’ He had drugs!” Tudyk said. “That’s just bizarre.”

Tudyk admitted he was unfamiliar with Whedon when he first received the “Firefly” call, but he was immediately charmed by the colorful world that surrounds sci-fi shows and films.

The seed for “Con Man” came at one of his first conventions, an Orlando event that Fillion also attended.

Tudyk brought the idea for “Con Man” to friend P.J. Haarsma, an author-producer best known for his work on “The Softwire” series of young adult sci-fi books. “Spectrum,” the fictional show in “Con Man,” will get a book series of its own from Haarsma.

Haarsma said he was immediately touched by Tudyk’s idea.

“It’s the emotional journey of a character who doesn’t realize all the love and fame he has always wanted is right in front of him,” he said. “People make fun of sci-fi conventions and that, but the fandom people seek out for fame is these guys. They’re bottomless pits of love.”

Haarsma said that after a series of pitch meetings didn’t go as well as hoped, Tudyk warmed up to the concept of crowd-funding the series.

“A lot of comments were like, ‘You know what you should do? You know what would be funny?’ The suggestions that kept coming at us were just making it more and more compromised,” said Haarsma, who arranged the deal with Vimeo.

Will “Con Man” maybe — just maybe — allow Tudyk to be known for something bigger than “Firefly”? Probably not.

“How could anyone know a show that would only go 14 episodes would still be alive today?” Tudyk said. “I’ve met kids who were not even conceived when the show was on the air, and they are just as enthusiastic as their parents.”