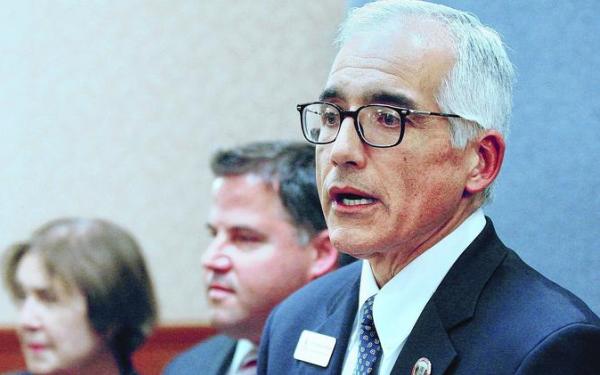 Mark W. Rocha agreed to step down as the college's president last August after nearly four years in the position. As part of the pact, he was allowed to help prepare the news release announcing his retirement and received a letter of recommendation from the college's Board of Trustees.

Some faculty and students had criticized Rocha for his management style and for approving the cancellation of a winter session.

A nonprofit group, Californians Aware, filed a lawsuit claiming that the college’s Board of Trustees violated the Ralph M. Brown Act, the state’s open meetings laws, by not discussing and taking action on Rocha's retirement and severance package in public.

The Times had also sent a letter to the college detailing its own concerns over alleged Brown Act violations.

Rocha's attorney, Michael M. Amir, said he had not seen the ruling and declined further comment.

It is unclear if and when Rocha would have to return the payment. O’Donnell ruled that the college must file papers within 90 days detailing how the settlement will be undone or report progress in a new agreement that complies with the Brown Act.

It remains uncertain how the ruling would affect the next president of the two-year school. Trustees recently appointed Rajen Vurdien and are negotiating a contract with him. Vurdien is currently president of Fullerton College.

Tensions between Rocha and school officials began rising last spring after one trustee criticized Rocha in a Los Angeles Times story, according to court documents.

In a May 2 column in the newspaper, Ross Selvidge said Rocha “is really [messing] up our college.”

Rocha threatened to “take action” and trustees were concerned he would sue the school, especially after he hired an attorney. Rocha and college officials entered mediation and agreed on a preliminary settlement package in late July.

On July 22, college trustees held a special closed session to discuss the agreement and held another private meeting on Aug. 6 but did not properly give public notice for either session, according to the judge’s ruling. Trustees also failed to properly disclose the settlement’s approval by trustees, the judge found.

College officials initially declined to disclose details about the severance package. After The Times and other media organizations filed formal requests for the agreement, college administrators released the documents but declined at first to say when the package was approved and whether any trustees had voted to approve it.

“The board didn’t look transparent, and that’s been the board’s problem for a long time,” Lewis said.

Other trustees declined to comment; Robert Miller, the school’s acting president, said in an email that the board is aware of the ruling and is considering the next steps but did not answer questions about Rocha’s role at the college given the ruling or if it would have any effect on negotiations with Vurdien.

Rocha’s settlement was one of two recent large payouts approved by trustees. They also voted to pay Oscar-winning screenwriter Dustin Lance Black $26,000 not to sue the campus after trustees cancelled an invitation to him to give last year’s commencement speech.

A trustee originally invited Black, who graduated from the college in 1994, but other school officials later withdrew the offer, saying they were concerned that images from a stolen sex video with Black that had been posted on the Internet could hurt the school’s reputation, according to the campus student newspaper.

College trustees later asked him back and approved a payment to him. Black said he used the money on legal and travel expenses.