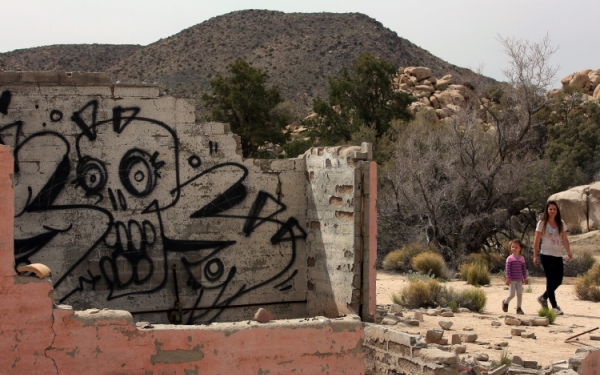 JOSHUA TREE NATIONAL PARK, Calif. — Andre Saraiva is an internationally known graffiti artist. He owns nightclubs in Paris and New York, works as a top editor of the men’s fashion magazine L’Officiel Hommes and has appeared in countless glossy magazines as a tastemaker and bon vivant.

Two months ago he showed up on the decidedly un-fashionista website Modern Hiker, along with a photo of a boulder he tagged in Joshua Tree National Park. Since then, Saraiva, who lives in France and is known by his fans as Mr. Andre and Mr. A., has been scorned by American nature lovers and thrust into a highly charged debate.

Saraiva is of a new generation of graffiti artists who regard nature — not just the built environment — as their canvas. They tag national parks, then post photos of their work on the Internet.

Those acts infuriate outdoor enthusiasts, many of whom are otherwise fans of graffiti art.

“This is a very complex issue,” said Casey Schreiner, editor of Modern Hiker. “How different is graffiti in national parks than street art? If street art is OK, is this OK? Is there a correlation?”

Schreiner said his readers “think it’s a problem because graffiti begets graffiti and they’re seeing it in places they’ve never seen it before. National parks are special places for most Americans. Seeing them marked up is like getting punched in the gut.”

Federal officials say graffiti is surging in some parks, even as it has been declining in most others. Hardest hit are those near population centers, such as Golden Gate National Recreation Area in the San Francisco Bay Area and Joshua Tree, which is a two-hour drive from Los Angeles and near Coachella Valley communities.

In Joshua Tree alone, graffiti artists vandalized the popular Rattlesnake Canyon in 2013, requiring an extensive cleanup; workers just finished removing etchings from the face of Barker Dam, and in February, someone painted a large, bright blue giraffe on a boulder in 49 Palms Oasis.

About the same time, someone painted a menacing 8-foot-by-12-foot image of a skull on the wall of a historical structure in a nearby area known as the Wonderland of Rocks.

“That makes me sick,” backpacker Steve Axthelm, 53, of Portland, Ore., muttered on a recent weekday as he surveyed the image.

Humans have been leaving marks in nature since prehistoric tribes put silhouette handprints on cave walls. Sourdoughs chipped their names into rocks during the California Gold Rush of 1848.

These days, public tolerance for tagging private property is spreading in cyberspace. Google recently launched a website touting street art around the world.

“Playing devil’s advocate: If provoking outrage is not part of your intention as a graffiti artist, why do it?” Jeremy Cross, an artist and curator at the Night Gallery in Santa Ana, said with a impish grin.

“In the modern art climate, throwing graffiti up on a downtown wall is passe,” Cross said. “Tagging a national park ups the ante. Of course, you’re setting yourself up for a public stigma — and not a good one.”

Images posted by an artist federal authorities suspect is responsible for graffiti in eight national parks, including Joshua Tree, prompted an online petition at whitehouse.com urging the Obama administration to take action.

The artist is believed to be Casey Nocket, 22, of New York, said Jeffrey G. Olson, a spokesman for the National Park Service. Evidence collected so far includes selfies of a young woman painting colorful faces in profile on rocks and boulders on ridgelines with panoramic views.

The snapshots, signed with the phrase “Creepytings 2014,” were posted on California hiking websites Calipidder and Modern Hiker.

Park officials are trying to fight back with hidden video cameras and “a new computer database that enables us to compare graffiti here with images popping up elsewhere such as Zion National Park,” said Joshua Tree park Supt. David Smith.

A year ago, the park service resolved a case against three juveniles after an online investigation of works they posted on Twitter and Instagram.

The hiking community is ramping up its own policing. Schreiner said Modern Hiker never intended to become a conduit for investigating graffiti, but the issue has caught fire. “So it’s one of the things we do now, full time,” he said.

Schreiner added that passions run high, with some readers making “blunt requests for the home addresses of perpetrators.”

As the best-known artist who has tagged in a national park, Saraiva has become a favorite target ever since his signature “OX” mark, revered when it adorns man-made structures, popped up on a boulder the size of a large dog kennel at Joshua Tree.

He compounded his error by denying that the boulder was in the park. Answering critics, he posted on Instagram saying his work was “made with love at friends privet back yard and not your national park! (sic).”

Readers then used Google satellite maps, latitude and longitude coordinates and their own field notes to pinpoint the boulder’s exact location — inside the park.

Facing a torrent of criticism, Saraiva had scrawled, his lawyer acknowledged, what he described as an “insignificant” artistic expression on the rock, using water-based paint that was erased a few days later.

The attorney also demanded that Modern Hiker take down its article, saying it made Saraiva the target of “oppressive and unjustified messages that seriously harm his professional and private life.”

Modern Hiker’s lawyers replied that defacing a national park is prohibited under federal law and may be punishable by a fine and imprisonment. The article remained on the website.

On April 1, Saraiva paid a fine of $275 to the U.S. District Court in Los Angeles, officials said. He could not be reached for comment.

Iskander Lemseffer, an acquaintance of Saraiva and owner of Lab Art, a Los Angeles gallery dedicated to street art, expressed mixed feelings about the dispute.

“When it comes to street art, you do it big or don’t do it all,” Lemseffer said, standing beside a provocative work of his own: a replica of a movie Oscar on its knees cutting lines of cocaine. “But even I was shocked when I saw photos of what Andre did to that rock.”

Los Angeles graffiti artist Kalen Ockerman, 43, who is also known as Mear One, said street art has a purpose that goes beyond the image.

“Graffiti art is the honest voice of the dissatisfied soul — it’s a political act,” Ockerman said. Then he added, “All Andre did was smear a work of art by Mother Nature with industrial chemicals to celebrate his own ego.”

As the debate goes on, some private businesses forced to paint over graffiti regularly see a certain irony in protests by graffiti fans angry about tagging in national parks.

“I wish they were just as outraged over graffiti on other people’s private property,” said Lena Kent, a spokeswoman for Burlington Northern Santa Fe Railway, whose freight cars and engines are tagged on a daily basis.