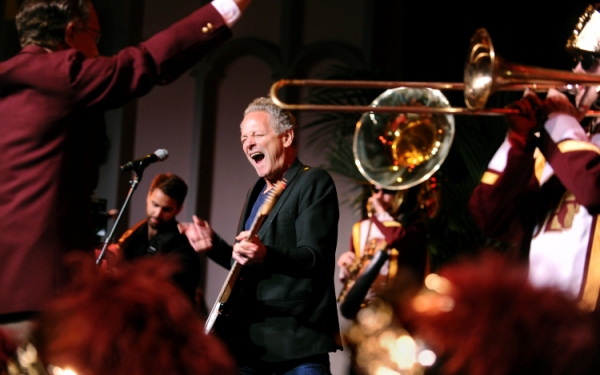 After a Q&A session in USC’s Bovard Auditorium, Buckingham and the Trojan musicians tore through USC favorite “Tusk,” followed by “Go Your Own Way,” to the delight of the students in attendance and the parents they brought along.

“Tusk” has long been associated with the private school, with brass chords as familiar to USC devotees as the university’s actual fight song. The original 1979 version was recorded with the USC band at Dodger Stadium and has been a game-day staple since.

Leading up to the short performance, Buckingham answered questions from David Belasco, a professor at USC’s Marshall School of Business. Throughout, Buckingham sprinkled in solo acoustic renditions of “Never Going Back Again,” “Bleed to Love Her” and “Big Love.”

The event was part of Belasco’s USC course “The Leap,” a series of discussions with business leaders and innovators about the “entrepreneurial mindset.” Guests have included Quincy Jones, Pete Carroll and Jessica Alba.

But the Buckingham visit was less about straight-ahead business advice than the successes and setbacks of the rock star’s long career. Still, he did deliver some wisdom about maintaining artistic credibility in the face of commercial pressures and public expectations.

He cited the creation of the double-album “Tusk” — the far less commercially successful follow-up to “Rumours” — as an example.

“What happens with artists, or people who start off doing things for the right reasons, is that you slowly start to paint yourself into a corner by doing what people outside of the creative world are asking you to do, and I think that’s antithetical to being an artist,” he said.

“(‘Tusk’) is my favorite album of all these albums, because of the reason it was done,” Buckingham said. “It started me down the path I still try to aspire to, which is to be an artist and not just a craftsman who is doing business.”