No UCLA players taken in first round of 2015 NFL draft 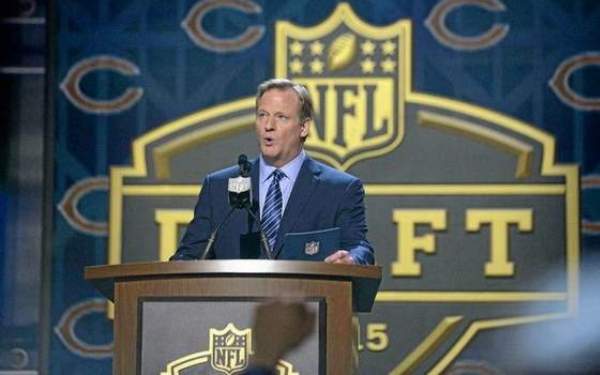 NFL Commissioner Roger Goodell speaks during the first round of the 2015 NFL Draft, Thursday, April 30, 2015, in Chicago.
(Credit: John Starks/Daily Herald via AP)

For the first time since Jim Mora coached his first game at UCLA, the Bruins did not produce a first-round NFL draft pick.

On Thursday, commissioner Roger Goodell stood in Chicago’s Auditorium Theatre and announced 32 names. None of them included linebacker Eric Kendricks or defensive end Owamagbe Odighizuwa, both of whom had been projected to go anywhere from the late first round to early second.

Their absence ended what had been a growing streak for the program: defensive lineman Datone Jones went 26th overall in 2012, while linebacker Anthony Barr went ninth last year.

Meanwhile, nine others from the Pac-12 discovered new teams on Thursday. USC, which lost to UCLA by 18 points on Nov. 22, put two Trojans into the mix: defensive lineman Leonard Williams (No. 6, New York Jets) and receiver Nelson Agholor (No. 20, Philadelphia Eagles). Washington, which lost to UCLA by 14 on Nov. 8, bested that total with three: defensive tackle Danny Shelton (No. 12), cornerback Marcus Peters (No. 18), and linebacker Shaq Thompson (No. 25).

Ducks quarterback Marcus Mariota was the first player from the conference off the board, going No. 2 to the Tennessee Titans after Tampa Bay opted for Florida State’s Jameis Winston.

The Bruins’ Brett Hundley could very well become the third passer selected, though when that happens is still unclear. Kendricks, who won the Butkus Award last season, and Odighizuwa likely won’t wait much longer on Friday, but many draft analysts soured on Hundley over the past several months.

Mora said this week that he sees Hundley as a second-round pick who could be bound for the San Diego Chargers, Dallas Cowboys or Arizona Cardinals — all of whom have incumbent quarterbacks who could serve as mentors.