One in six species could be wiped out by climate change, study says 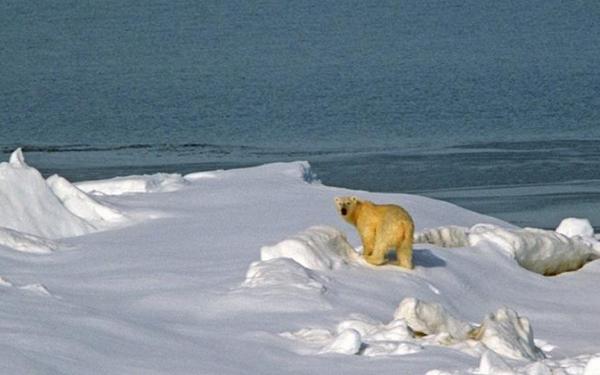 A warming climate means less Arctic ice and less opportunity for polar bears to hunt. A new study predicts that climate change could cause as many as one in six species to become extinct.
(Credit: latimes.com)

About one in six species now alive on the planet could become extinct as a result of climate change, according to a study published in Friday’s edition of the journal Science.

If present trends continue, the Earth’s temperature will wind up 4.3 degrees Celsius higher than it was before the onset of the industrial era. Should that scenario come to pass, as many as 16 percent of species around the world would be at risk of dying out, the study says.

Author Mark Urban, an ecologist and evolutionary biologist at the University of Connecticut, based his calculation on a meta-analysis of 131 previous studies that made predictions about how multiple species would fare in a warmer world. Although the studies focused on different species in different parts of the world and used different modeling techniques to make their forecasts, Urban’s statistical methods found that none of those variables mattered as much as “the level of future climate change.”

For instance, the current risk of global extinction is 2.8 percent, Urban wrote. But the hotter the Earth gets, the more that risk rises.

If the world is somehow able to stick to its target of making sure temperatures rise only 2 degrees Celsius above pre-industrial levels, the global extinction risk would rise to 5.2 percent.

In the more realistic scenario that the Earth warms by 3 degrees Celsius, an estimated 8.5 percent of species would be projected to become extinct.

And if things continue the way they are, the global extinction risk would nearly double, to 16 percent, Urban wrote. That’s one out of every six species gone.

The average of all the scenarios is that 7.9 percent of species will become extinct as a direct result of climate change, according to the study.

The extinction risk isn’t the same in all areas of the globe, Urban found. It appears to be lowest in North America, where about 5 percent of species are likely to disappear. (That figure could be higher or lower depending on how much temperatures rise.) Europe is a close second, with 6 percent of species at risk.

At the other end of the spectrum, South America could lose 23 percent of its species. That continent is particularly vulnerable because it has a lot of creatures that live in small ranges. If changing climate conditions make their homes uninhabitable, there’s nowhere for them to go where they can find equivalent conditions.

In Australia and New Zealand, as many as 14 percent of species could disappear, Urban wrote. As in South America, the animals that live Down Under have the misfortune of inhabiting niche environments with no ready alternatives. The fact that they live on islands further limits their ability to seek comfort by moving into new ranges.

The analysis also revealed that the faster Earth’s temperature rises, the more species will die out as a result. If temperatures rise more gradually, animals will have more time to adapt — and better odds for success.

“Extinction risks from climate change are expected not only to increase but to accelerate for every degree rise in global temperatures,” Urban wrote. “The signal of climate change-induced extinctions will become increasingly apparent if we do not act now to limit future climate change.”

Urban noted that the species that go extinct aren’t the only ones that will be forced to reckon with climate change.

“Even species not threatened directly by extinction could experience substantial changes in abundances, distributions, and species interactions,” he wrote. That “could affect ecosystems and their services to humans.”

The 131 studies that were used to make these estimates did not take into account such complex factors as the way climate change may prompt species to change they way they interact with each other. Nor did they attempt to predict how species might evolve to adapt to their new realities.

The study is only one of many that makes the case that “climate change will have enormous impacts on the organisms with which we share our planet,” she wrote. Despite the uncertainties inherent in making these kinds of predictions, she added, “we should not wait … before taking action, preferentially by curbing emissions.”