Duke student who hung noose apologizes, will be allowed to return to campus 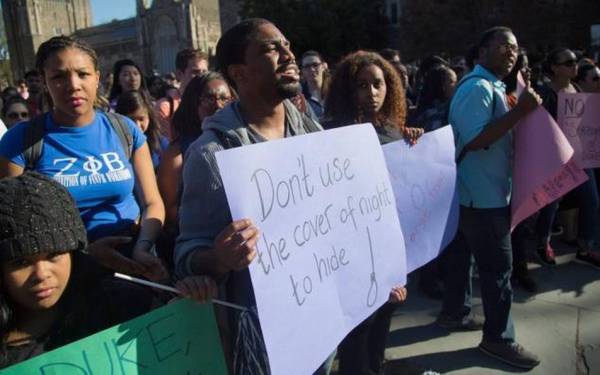 Duke student Malcolm Bonner, center, rallied with hundreds during a university-wide forum after the noose was found in April.
(Credit: Travis Long / The News Observer)

RALEIGH, N.C. — A Duke University student who admitted hanging a noose on campus last month has been sanctioned but will be allowed to return to the university next semester.

On Friday, the university announced the outcome of its investigation, saying the incident was the result of the student’s “ignorance and bad judgment.”

The university did not reveal the undergraduate student’s identity, nor the nature of the sanction, citing federal student privacy law. Duke officials said they had reported the incident to the U.S. Department of Education’s Office for Civil Rights.

Law enforcement authorities have closed their investigations into the matter and “will be taking no further action,” said a post on the university’s website.

Also published on the university website was a lengthy letter of apology from the student to the Duke community, who insisted that there was no intent to express racism by the action of placing a noose in a tree outside the student center on April 1.

“Unfortunately, through my lack of cultural awareness and joking personality, I ended up unintentionally creating a huge mess for myself, my friends, my family and many members of the Duke community that I severely regret. … At the time, I truly did not appreciate the historical sensitivity of a noose hanging in a tree,” the letter said.

The student wrote that the purpose of the action was to take a few photos of the noose with friends and text it to others, inviting them to come “hang out.”

“If there was ever a pun with unintended consequences — this was certainly one,” the letter continued. “In addition, when I left I carelessly forgot the noose hanging on the tree for the rest of the afternoon and the evening rather than discarding it, as I should have. As a result, people saw it and because of the historical meaning of a noose in the South, a fact that because of my background and heritage I was completely unaware of, conclusions were made that whomever had made the noose did it for racist reasons. This led — completely justifiably—to the student demonstrations, and the school’s expression of disgust of my actions.”

The letter said the student came forward to the university administration to take responsibility for the act and to explain it.

The student’s race and gender were not identified, but the student wrote that things at Duke had been going well until the incident, specifically mentioning a new relationship with a woman.

The incident sparked a huge response on campus, with a march by African-American students and a large gathering that drew hundreds to the steps of Duke Chapel for a peaceful rally.

The noose incident followed a report in March by a student who said she encountered students on Duke’s campus chanting the Sigma Alpha Epsilon song that had been caught on video at the University of Oklahoma.