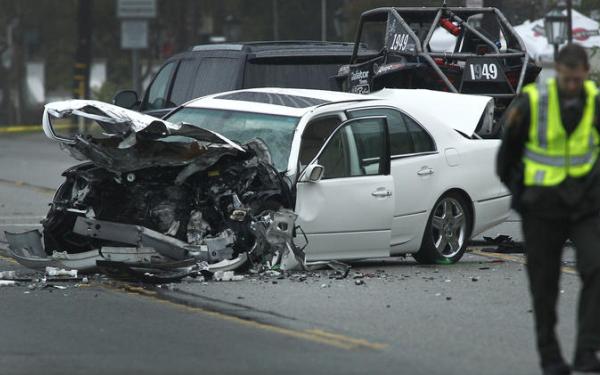 The stepchildren of a woman killed in a car crash involving Bruce Jenner filed a wrongful-death lawsuit Friday against the Olympian, accusing him of being negligent.

William Howe and Dana Redmond, the stepchildren of Kim Howe, 69, say Jenner is responsible for causing her death and “damage to her effects,” according to the lawsuit filed in Los Angeles County Superior Court. They said they have suffered “enormous damages and losses.”

Jenner “violated the rules of the road” and was “negligent, careless and reckless,” according to the lawsuit.

The lawsuit alleges Jenner, 65, violated the basic speed law, a California vehicle code section “designed to protect” their stepmother and other drivers.

Her stepchildren say Howe was acting with “caution, attention and care and did not in any way contribute to, or cause” the crash.

Her children say they have lost love and affection as a result of her death. They incurred bills and have had to pay for damages, according to the lawsuit. They are seeking unspecified damages.

Kim Howe maintained a close relationship with her stepchildren of 40 years, even after their father died 10 years ago, attorneys Jeffrey Wolf and John Sheehan said in a statement.

“So far, no one has accepted responsibility for the collision that resulted in Ms. Howe’s death,” the attorneys said. “Her children feel an obligation to bring the truth to light and seek justice for Ms. Howe. This lawsuit is the only tool at their disposal that gives them the ability to do so.”

Jenner’s representative, Alan Nierob, declined to give a statement on the lawsuit.

Howe was killed Feb. 7 on Pacific Coast Highway in Malibu when her Lexus was rear-ended by Jenner’s Cadillac Escalade and went into oncoming traffic, where it was hit head-on by a Hummer.

Howe was driving behind a Toyota Prius, which came to a sudden stop. She was rear-ended by Jenner, who was towing a trailer with an off-road vehicle.

An initial account of the accident said Howe rear-ended the Prius, then Jenner rear-ended Howe’s vehicle, pushing it into oncoming traffic.

But attorney Robert Simon, who represents the Prius driver, said his client was hit by Jenner’s Escalade -- not Howe's Lexus as first described.

After the Lexus was pushed into oncoming traffic, where it was struck by the Hummer, Jenner’s SUV continued on and hit his client’s car, Simon said.

In an ABC interview with Diane Sawyer on April 24, Jenner revealed he identifies as a woman.

He threatened to sue the New York Daily News after it published a photograph of him wearing a striped maxi dress while holding a cigarette at his Malibu home. Two days before the ABC interview, the photo appeared on the cover of the tabloid.