Mumford & Sons returns with ‘Wilder Mind’ and a new balance 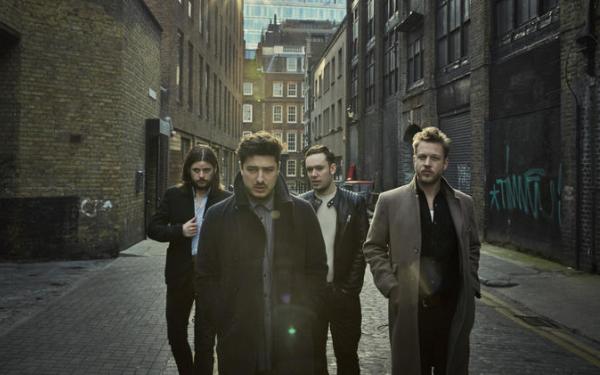 LOS ANGELES — Belief is big in the world of Mumford & Sons.

It figures into the British quartet’s music — consider “Believe,” the first single from the forthcoming “Wilder Mind” album — but it’s also a key element of the way Marcus Mumford, Winston Marshall, Ben Lovett and Ted Dwane approach their whole career, and in particular, the dramatic musical shift evident on “Wilder Mind,” released worldwide this week. The album marks a tangible departure from the rootsy, Americana sound that won the group millions of fans, critical accolades and industry awards for its first two albums.

The change is immediately evident: Almost entirely gone are the banjo, mandolins, accordion, acoustic guitars and upright bass of 2009’s “Sigh No More” and 2012’s blockbuster “Babel” albums, which collectively have sold nearly 6 million copies in the U.S., according to Nielsen SoundScan. Instead, rootsy instruments have given way to synthesizers, blazing electric guitars and bass-drum loops on “Wilder Mind,” a distinctly different sound expressing an expanded sense of late-night melancholy.

While a major shift like this — which now finds the band closer to the realm of British rock acts such as Coldplay, Snow Patrol and Elbow than rootsy acts and former musical brethren like the Avett Brothers and the Lumineers — may seem risky in today’s musical climate, Mumford & Sons are confident that theirs are fans who will broadly endorse all their musical instincts and not a specific sound or singular recording.

“It feels almost like they’re supporters of us as people rather than as musicians or rock stars or whatever,” the group’s namesake, Marcus Mumford, 28, said at their West Hollywood hotel on a recent visit to L.A. He and his band mates expressed delight at the sunny California weather after their recent time in a still-wintry New York, where Lovett lives and Mumford visits regularly while his wife, British actress Carey Mulligan, is working on Broadway. It was also night-and-day improvement over the gray and chilly climes of London, where Mumford and Dwane primarily reside and where the band recorded “Wilder Mind” with producer James Ford and associate producer Aaron Dessner of indie rock band the National.

They made the late-March trip west for two “secret” shows at the Roxy to woodshed the “Wilder Mind” songs ahead of a large-scale summer tour.

“It sounds really corny, but it feels like they’re supporters rather than fans, you know what I mean?” he continued. “In England, we call soccer fans ‘football supporters,’ because it’s like a lot of us obviously idolize soccer players, but you’re also quite critical of them; you’re quite paternal toward them, like ‘What are you doing, mate? Get up! You’re not doing your job properly! I’m a supporter of this team!’”

That buy-in theory was certainly supported by those secret shows, during which Mumford & Sons asked fans to leave cameras and smartphones at home or check them at the door to help keep the new songs out of the public eye until the album is released. Both crowds gladly obliged.

“This is the first time in our history as a band that we’ve had music that people haven’t heard before, which is kind of strange,” Mumford said. “We came out as a band just when YouTube got really big. So when ‘Babel’ came out, you could already find 10 out of those 12 songs on YouTube. This time around, no one has heard anything, which, again, is quite daunting.”

At the Roxy, the new material came across as a sonic expansion that didn’t lose the zeal of the group’s earlier songs, which often saw them attacking their folk-world instruments with a punk rock-like abandon.

“From our internal perspective,” Lovett said, “it doesn’t feel like that much of a drastic move, really. It feels like more of a continuation than a departure. I don’t doubt that some of it sounds very different, but to us it’s pretty cohesive.”

Stylistic shifts this dramatic are rare at the top of the pop music heap but not unprecedented. Norah Jones left many fans of her sultry jazz-pop scratching their heads when she indulged her country music passion with the Little Willies side project, Katy Perry gave up her identity as Christian pop singer Katy Hudson for a new career in mainstream pop and Taylor Swift left behind pretty much all vestiges of her country music foundation on her two latest blockbuster pop albums.

In tandem early-morning interviews — first Mumford and Marshall, then Lovett and Dwane — the four quintessentially British blokes, still a bit sleepy eyed from their Roxy show the previous night, pingponged thoughts off one another, finished one another’s sentences and occasionally let go with hearty guffaws at something the other had said. But they also came across as thoughtful, even pensive at times, about their still-unfolding musical journey.

The band’s hunch about fan loyalty may be justified beyond the confines of an intimate performance too.

“The response to the new Mumford & Sons song has been overwhelmingly positive,” said Lisa Worden, program director at KROQ-FM (106.7), which promptly added “Believe” to its playlist when it was released in early March. “There have been a few comments about the lack of banjos, but most of the responses have been expressing love for the song. And judging from the rapid sellout of our pre-sale ticket allotment for their shows at the Forum, I’d say people are really liking what they’re hearing.”

In “Believe,” people are hearing Mumford sing powerful expressions of doubt about a relationship: “I don’t even know if I believe everything you’re trying to say to me.”

That’s a very different attitude than the one expressed in “Holland Road” from “Babel”:

When I’m on my knees, I still believe

And when I’ve hit the ground, neither lost nor found

If you believe in me, I’ll still believe

The musicians, however, consider “Wilder Mind” a natural evolution, not gear-changing revolution.

“It wasn’t a need,” Marshall said, sitting on a sofa a few feet from Mumford. “Banjos, dobros and acoustic guitars are not our first instruments. Mum’s a drummer, I’m a guitarist. I think Ben’s the only guy who [was] playing his first instrument. Touring for six or seven years with those [acoustic] instruments, there was definitely a need within us to do these other things. There wasn’t a need to reinvent the band.”

Where “Babel,” which earned the band a Grammy Award for album of the year, was largely written on the road while the band toured its neo-folk debut album “Sigh No More,” the runaway success of “Babel” afforded the group the luxury of time off and a blank canvas.

“Because we made [‘Babel’] and wrote so much of it whilst we were touring, in sound checks, we were using the same instruments as we’d had on our first record — that’s what we had at our disposal,” Marshall said. “This time, we could go away and play guitars and synths, drum loop machines and all this kind of nonsense, and kind of do whatever we want.”

The result: a darker, more melancholy tone, mostly centered on self-doubt, that has as much to do with how and when they wrote the songs as with any conscious effort to try something different.

Belief also figures prominently into the group’s first tour in nearly two years, which encompasses the usual stops at arenas and amphitheaters in major markets while also taking a gamble with what they’ve dubbed the Gentlemen of the Road Stopovers — miniature band-curated festivals engineered to stop in small towns around North America.

“Things got big quickly for us, and playing arenas ... it’s like — every band will tell you this — you don’t see any of the town,” Marshall said. “When we first started touring we were going to these towns we’d never otherwise go to, never otherwise see, and that’s sort of why we like being in a band. But we started playing these bigger rooms and not even seeing the towns.”

The Stopovers began in 2013, when, drawing on their experiences early on playing the Telluride Bluegrass Festival in Colorado, Loopallu Festival in Scotland and St. Jerome’s Laneway Festival in Australia, the group launched a string of its own weekend festivals in small towns. This summer it’s setting up shop for a weekend each in Seaside Heights, N.J.; Walla Walla, Wash.; and Salida, Colo., among others. Besides their own performances, Mumford & Sons invite acts including the Flaming Lips, My Morning Jacket, Alabama Shakes, Dawes and Jenny Lewis to share the bill and often collaborate with other musicians over the course of those shows.

The idea, they say, is to work closely with residents of the towns they visit to make them an integral part of the festival. They’ve connected with local brewers, who concoct custom microbrews sold only at the Gentlemen of the Road Stopovers. After those shows, they typically head into town and get late-night jam sessions going.

“We love the community that comes along with playing music,” Mumford said. “I suppose that’s quite an old-school way of looking at it.”

As much of a group effort as Mumford & Sons may be — the band of brothers always conducts press interviews collectively, downplaying the breakout-star potential Mumford carries because the group took his name as its own — that doesn’t mean its members haven’t also pursued their own projects.

“I now have much greater appreciation and confidence in the process of collaborating,” Mumford said of the experience, a lesson that translated to a more egalitarian writing process with Lovett, Dwane and Marshall.

That new balance appears to bode well for the long-term prospects of Mumford & Sons.

“It’s like any relationship: You have to opt in every day,” Dwane said. “We do work quite hard to sustain this. Creatively and personally, we try to ensure that everyone’s happy and fulfilled. I don’t think it is a hard thing to sustain if you have something intentional about it.”

Added Lovett: “What we represent has evolved from what it started out as. Going on that journey together and being constant in not having to be bound by what we once were, it’s crucial for us to have that opt in.”

“You can’t really opt in,” Dwane responded, “to something you don’t believe in.”