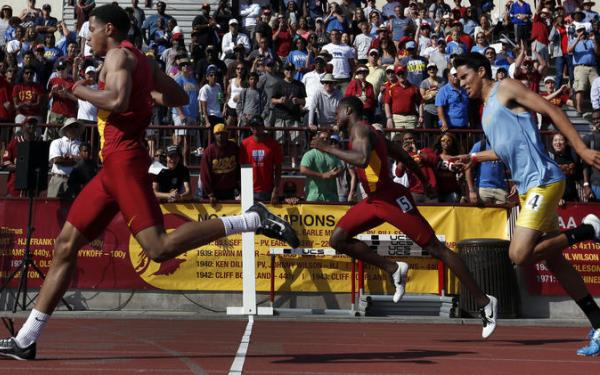 A couple things were on Davonte Stewart's mind as he waited to run the last leg of the 1,600-meter relay for USC on Sunday.

There was the fact that the USC men's team had lost four consecutive dual meets to UCLA. There were those "Cry On" T-shirts the Bruins wore at the meet, mocking USC's "Fight On" motto.

It's not hard to guess which one motivated him more as he pulled away from UCLA's Joe Herrera to win the race, and the meet for USC, 82-81, at Loker Stadium.

"Those shirts were kind of disrespectful," said Stewart, who also won the 400 meters with a lifetime-best time of 46.51. "Just to shut them up meant a lot."

Stewart's finishing kick in the 1,600 ended two drastically different meets. The USC women's team rolled to a 93-70 victory to help justify its No. 1 ranking in the U.S. Track & Field Coaches' poll. The USC men, who are ranked fourth, managed to scrounge up every point possible in a tug-of-war competition.

The Trojans picked up one point when UCLA's Jarrett Gonzales was disqualified in the 400 hurdles. His third-place finish went to USC's D.J. Morgan. The Bruins took that point back when Idrees Bernard captured the triple jump on his last effort.

It left the outcome with the last relay. The race was a near dead heat through three legs when Stewart took the baton and took off.

There was no drama in the women's meet.

The Trojans fell down early, 31-5, but Coach Caryl Smith Gilbert wasn't too worried.

"I knew what was coming," she said. "We hadn't had the discus yet and we hadn't run any of the sprint races."

USC's Tera Novy and Alexandra Collatz placed first and second in the discus and the Trojans swept the 100, 200 and 400.

The Trojans were so dominant in the sprints and hurdles that not even a couple of gaffes slowed them.

Ky Westbrook, who had run the fourth fastest time in the 100, was disqualified for false start and USC still swept the event. Alexis Faulknor won the race with a time of 11.30.

USC's Dior Hall, who had the nation's fifth-fastest time in the 110 hurdles, fell after hitting the third hurdle. USC's Melina Cox won the race with a time of 13.3.

On the men's side, Andre DeGrasse set a stadium record and tied the meet record with a 10.04 in the 100 meters. He also finished second in the 200 meters.