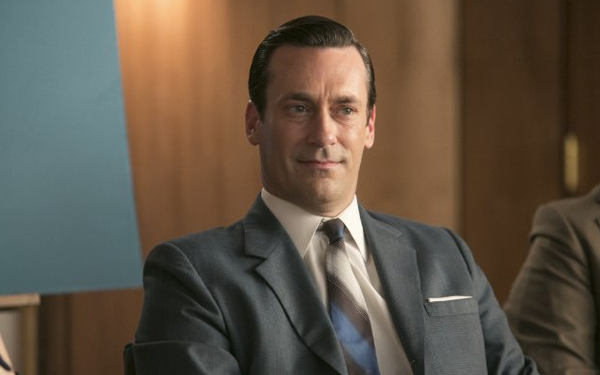 What will be the end for Jon Hamm’s Don Draper?
(Credit: Jamie Trueblood/AMC)

The final season of “Mad Men,” AMC’s sex, drugs, and advertising drama, has begun and it has fans bubbling with theories on how it will end. All eyes are on Matthew Weiner, the shows creator, to rightfully close this adored period piece of America’s Golden Era. But what would satisfy such a complex narrative? It may be hard to accept, but the show’s (anti) hero—the sultan of suave, the commander of cool, the whiskey-sipping ladies’ man—Don Draper, must die.

Throughout all seven seasons, “Mad Men” has incorporated historical events from the second half of the 20th century into the plot. The 1960 presidential election between Richard Nixon and JFK plays on a television in the background of a wild office party. Roger Sterling, Don’s boss and drinking buddy, gets swept up in the countercultural LSD movement of the ‘60s. Joan Harris becomes a partner at the ad agency only after she sleeps with a client, showing the prevalent sexism of the time. Even the dress and grooming of the show's characters has been precise—i.e. Harry Crane's Beatle-esque mop top and Stan Rizzo’s Easy Rider fringe jacket. In episode one of the final season, a television screen airs Nixon’s inaugural address meaning that it’s January of 1969, a time of great change in America.

"Time Zones," the opening episode that premiered last April, shows many of the primary characters adjusting smoothly to the changing era. Roger has elevated his embrace of the counterculture by experimenting with free love while Peggy Olson capitalizes on the period’s advancement of women’s rights by ascending the corporate ladder. Don, on the other hand, has had a difficult time adapting. Looking back at season six's "A Tale of Two Cities," Don and Roger visit a client in Los Angeles but the two also end up at a raucous hippy party. Don indulges in a hookah filled with hashish, hallucinates vividly and ultimately ends up face down in the pool. In other words, the middle-aged adman can't keep up with the young tykes and their new ways to let loose—he better stick to his trusted old fashioneds. The times they are a-changin' and Don is snugly stuck in the fading past. He belongs in the “Leave it to Beaver” 1950s, not the psychedelic ‘60s.

Another plausible reason for Don's death emerges from a skewed rendering of Christianity's seminal event—the death of Jesus Christ. We all know the story that says Jesus died for the sins of humanity. Now, Don Draper is no saint. Throughout the series, the “Mad Men” star has repeatedly fell victim to his insatiable desire for women in spite of Betty (his first wife) and Megan (his second). Don's selfish sleeping around has had a tumultuous effect on those who care for him. Don’t get me wrong—the show is at its best when Don is at his worst, but with lechery comes ramifications. So, if he's not dying for the sins of others, there's a considerable case for him to die for his own.

Enjoying the touch of strange women is not Don’s only vice. He has a steady diet of whiskey and cigarette smoke. Very rare does an episode of “Mad Men” (let alone a single scene) go by without Don sucking down tobacco and sipping on rye. A harsh lifestyle like this is sure to bring eventual health complications. And in season seven’s opener, a prophetic allusion to this possible demise comes up while Don is flying home from Los Angeles. Don cozies up next to Lee Cabot, a good-looking widow, on his redeye flight back to New York. Cabot was in Los Angeles scattering the ashes of her husband who had, "died of thirst." Cabot also mentions that, "He worked fast, too." For Don, this tragic tale hits eerily close to home. Throughout the majority of his life, he has stuck to the three Ws—whiskey, work, and women. Don’s lungs and liver, once pink and healthy as a young boy in the brothel, probably now resemble charred brisket.

One final (and brutally obvious) clue for Don's imminent demise has been staring viewers in the face since the show's beginning. The opening credits feature a cartoon silhouette of a suited man (Don...duh!) falling to his death. Abstractly, this can be taken as an allusion for Don's constant effort to ground himself during his ongoing search for identity and his commitments to work and various women. However, taken literally, the opening credits could have been foreshadowing the show's finale all along. Will it be a suicide then? Will Don be finally fed up with his job and jump out the window of the Madison Avenue high-rise? Or will it be a plane crash? He has been travelling quite a lot now that a majority of the firm’s business is in California while he's still stationed in New York. Though blatant and trite, the show's outcome might have been revealed way back in 2007 during the premier.

The fact of the matter is: Don Draper is already dead. He died back in Korea, remember? Dick Whitman is the true identity of the protagonist on “Mad Men.” The final scene of the series might not be a literal, reverse zoom of John Hamm’s body lying lifeless on the floor—á la “Breaking Bad.” Instead, the end of “Mad Men,” sending viewers adrift in a void occupied only by repulsive reality TV and “Game of Thrones,” might be a symbolic death; an end to the life of women, wealth and power that Dick Whitman forged under the alias, Don Draper. After all, Matthew Weiner was a writer on “The Sopranos,” the show famous for the most anti-climactic final scene ever. The crippling of the hero known as Don Draper would make the show a modern-day Shakespearean tragedy—a megalomaniac rise followed by a poetic, life-shattering fall. Although morbid and bold, this anti-climax for television’s complex ladykiller is the compulsory conclusion. Either way—whether Don ends on top or Dick Whitman lies lifeless in a gutter, bottle of scotch in hand—come May 17th, the show itself will perish, taking the cast with it. And that will be a loss worth mourning.