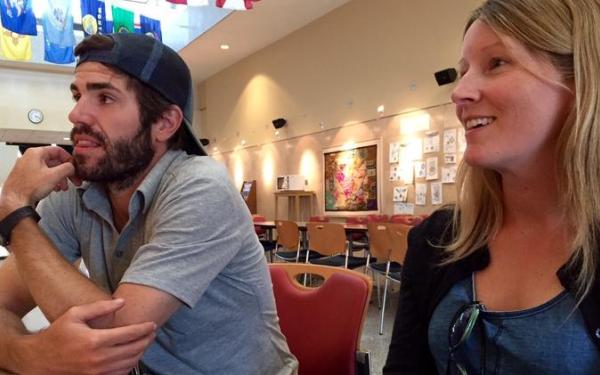 Andrew and Jennifer Maiorana might owe everything to a questionable chicken leg.

Not long after consuming the vacuum-packed, blood-red leg procured from a market in northeastern Nepal, Andrew Maiorana, a 33-year-old from San Francisco, fell violently ill. On the morning of April 25, instead of continuing their long Himalayan trek, the couple were resting in the three-house hamlet of Lokpa when the earthquake struck.

They raced out of their second-story room and down a free-swinging ladder onto the road, where they saw the massive hillsides begin to crumble like dust.

“The mountain was spitting rocks,” he said. “Entire trees were falling 2,000 feet. It was awesome, in the original sense of the word.”

Somehow, Lokpa held firm and sustained little damage even as the surrounding valleys echoed with sliding rock and menacing aftershocks. For eight days, the Maioranas hunkered down with villagers and other stranded trekkers until they were rescued Sunday by a Nepalese helicopter and later brought to Katmandu by a U.S. special forces contingent.

In the brutal accounting of Nepal’s worst earthquake in nearly a century, a stroke of fortune as simple as food poisoning helped keep the couple from becoming a statistic. In Katmandu they learned that some hikers they met in the remote Tsum Valley probably perished when a landslide swallowed the trail. On Monday, Nepalese officials said 52 bodies had been dug out of snow and ice in Langtang, north of the capital, where scores of trekkers had been missing since the quake.

Jennifer Maiorana, 34, recalled that it was odd seeing a chicken leg for sale in Tsum, where the people mainly are vegetarian. But they could not have found timelier shelter than tiny Lokpa, 60 miles northwest of Katmandu.

With its spectacular peaks and verdant valleys, northern Nepal beguiles hikers and adventurers from around the world. The quake, which as of Monday has claimed 7,365 lives in Nepal alone, according to police figures, marooned hundreds of foreign and Nepalese travelers when villages were cut off by landslides and avalanches.

Over the last week, Nepalese army helicopters and those chartered by embassies and insurance companies have rescued most who were stranded. The U.S. Embassy in Katmandu has brought 17 Americans to safety in chartered choppers, including the Maioranas, officials say.

A dramatic airlift was not part of the young couple’s itinerary. Both had left jobs in advertising to travel the world for six months. Although avid hikers back home in the Bay Area, neither had been to Nepal.

Andrew Maiorana, lean and outgoing, with swept-back brown hair, plotted their route through the Tsum Valley on a map with a black ballpoint pen. Along with a Nepalese guide and porter, they set off from Lokpa a week before the quake, making their way toward the Tibetan border and back, spending nights in small villages so isolated that their only power source was solar.

By the time they returned to Lokpa he had developed a stomachache and chills. While he rested, Jennifer Maiorana, a blond, petite former Peace Corps volunteer, read aloud to him from the Khalid Hosseini novel, “And the Mountains Echoed.”

“And then they really did start to echo,” she said, “all around us.”

Part of one building collapsed, but their concrete guesthouse remained intact. In the hours that followed, a series of dazed, weary trekkers and their guides wandered into Lokpa, seeking sanctuary.

Four French hikers turned up, as did a Russian group that challenged the Americans to a round of Frisbee golf (“Winner gets a seat on the first helicopter!”). Sandy Kyin, a 29-year-old from Houston, arrived with two Spaniards, having barely survived the quake – and the previous several months.

A slender, gregarious woman with roots in Taiwan, Kyin had left her consulting job and was in the middle of a yearlong worldwide adventure that had proved a bit star-crossed. She was in the Philippines when a typhoon struck. She went to eastern Turkey when the war in Syria was spilling across the border.

“Nepal,” she said, “was going to be the highlight.”

Kyin and her Spanish companions had been having lunch at a village north of Lokpa when the quake struck, collapsing the building they were in and sparking a fire. They helped villagers douse the blaze, hauling water in pots and buckets from a nearby stream.

Landslides had swallowed part of the route to Lokpa, but Kyin and the others clambered over slippery rocks and sidestepped donkeys that had been maimed or killed.

They stopped to catch their breath at a small teahouse just before Lokpa. Finding no one inside, they broke in and opened four bottles of Coke and some biscuits. As they were leaving, Kyin tried to leave money on a table. Her guide stopped her.

“Do you think anyone’s going to come back here to find it?” he asked.

In Lokpa, the motley group killed time by cooking momos – Nepalese dumplings – and calling their families, embassies and trekking outfitters on the village’s solar-powered satellite phone, trying to arrange a rescue.

Andrew Maiorana’s twin brother called nearly every day. When the trekking company promised to send a helicopter, one of the French hikers, a pilot, suggested they make a helipad. In a clearing at the edge of a vast cliff, the group spread flour on the ground in the shape of a large circle with an “H” in the middle.

“It looked great, but then the cows came and ate some of the flour,” Andrew Maiorana said. They redid the circle in ash and he painted a sign that read, “Lokpa International Airport.”

Then, for days, they waited.

“So many helicopters flew over us, and we would run to flag them down,” Jennifer Maiorana  said. “But they were always going somewhere else.”

There was food in the village – some rice, and fresh vegetables from a garden. But they grew anxious. For three straight days, they received calls saying a helicopter was coming for them. On Sunday night, a chopper arrived but left with only the French hikers aboard.

The next morning, shortly after 9 a.m., a helicopter touched down and a Nepalese pilot stepped out. “Are you Andrew Maiorana?” he asked. They were flown south to a village called Salyanter, then caught a local bus to Arughat, where they were told a U.S. military special forces team would meet them.

It was almost dusk, and the Maioranas were starting to wonder if the Americans were coming. They bought a chicken for dinner and were preparing to spend the night when they heard the familiar whir of a helicopter and raced out, arms waving.

“After watching helicopters come and go for eight days,” Andrew Maiorana said, “you know when one’s coming for you.”

In the library at the U.S. Embassy in Katmandu on Monday afternoon, the Maioranas sat at a bank of computers, catching up on the world. He had on a clean shirt but was still wearing his thick outdoorsman’s beard. She had changed into a light cotton skirt.

They were reunited there with Kyin, who had left Lokpa after two nights and made her way to Katmandu by foot and bus. Along the trail, she said, she saw the discarded sleeping bags of a large group of Europeans they had met in the valley, leading her to believe they did not make it out alive.

Kyin planned to remain in Nepal, hoping to help quake victims. The Maioranas, unbowed, were ready for a new destination. As they left a meeting in the embassy cafeteria, Jennifer Maiorana  turned to a U.S. official, a diplomat based in Mumbai, and fixed him with curious eyes.

“Tell me about India,” she said.