May the fourth be with you: fans celebrate Star Wars Day 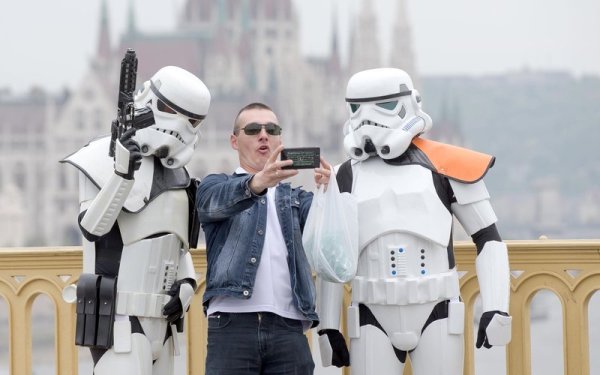 Given the expansive - and growing - fandom that surrounds one of film's best-loved - and growing - franchises, it's not a surprise there's an entire day set aside to honoring the Star Wars universe. What is surprising is what inspired the day: a pun so eye-rolling it may as well have been quipped by someone's dad.

While the Star Wars films are filled with so many memorable quotes, it was someone else's take on its most famous one that spun off what is now a day that millions of fans around the globe set aside for celebration. According to the official Star Wars website, it was a report on Margaret Thatcher that is credited (or blamed, depending on your view of puns) with kick-starting "Star Wars Day." Alan Arnold was recording the making of The Empire Strikes Back and included this tidbit for Friday, May 4, 1979:

Margaret Thatcher has won the election and become Britain’s first woman prime minister. To celebrate their victory her party took a half page of advertising space in the London Evening News. This message, referring to the day of victory, was ‘May the Fourth Be With You, Maggie. Congratulations,’ further proof of the extent to which Star Wars has influenced us all.

Of course, with the advent of the Internet came the advent of fan forums, messageboards, and chat rooms and with a loyal following that few - if any - pop culture titans can match, Star Wars fans from around the world were able to connect and share in their celebration of George Lucas' beloved trilogy. Numerous re-releases and a somewhat less-warmly received - but no less monetarily successful - prequel trilogy only expanded the fandom online. The franchise even has its own encyclopedic resource based off of Wikipedia, named "Wookieepedia." (Again: puns!) So it didn't take much for fans to pick up on the "May the Fourth" pun and "Star Wars Day" was born.

As the years have gone by, so has "Star Wars Day" grown. The official Star Wars site has even done fans a solid by listing some special deals retailers are offering in honor of the day as well as a swell gift guide for the Star Wars fans in your life. The day isn't also about spending money; Lucasfilm and Disney are also promoting a new "Force For Change" initiative with UNICEF.

And there are plenty of other ways to celebrate. Looking for an excuse to throw a party? You're covered. Need some new tidbits on the upcoming Star Wars: The Force Awakens film to get you in the mood? Don't worry, you're good. Want a history of Star Wars events that have happened on May 4th? No problem.

Of course, the age of the Internet hasn't brought just these opportunities for fans to come together and share their joy in something they love. It's given a platform for those who are looking to ruin the fun. In a column for Denver alt-weekly Westworld, Cory Casciato nails why so many people love Star Wars and why it deserves to be celebrated (even if Jar Jar Binks was pretty terrible).

The cultural and economic impact of Star Wars is a big part of why I can say the words "geek culture" today and not be looked at like a man speaking in tongues. Star Wars didn't create the summer blockbuster (that'd be Jaws), but it sure blasted it into hyperdrive. And while merchandising was always a thing, only Star Wars had the muscle to turn characters that were onscreen for less than a minute into toys, and have people fighting over the last one in the shop. The truth is that geeks wouldn't be where they are today if it weren't for Star Wars — and whether you like the films or not, that's something of value.

And that's a culture that's only going to spread today as fans take to social media to share costumes, quotes, and whatever else about the Star Wars universe that they love. So take a deep breath, dive in, and let it wash over you, fans. And for those who have no clue what's going on, well, it's not like you've had years to catch up.