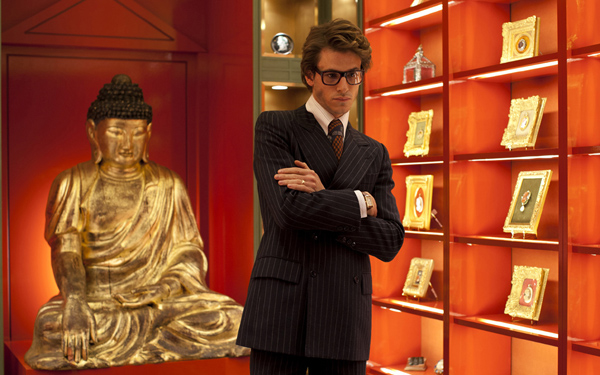 When he looked at a woman’s form, he saw something others couldn’t. The curves, the delicacy of their angles, and the supple strength that held it all together spoke to him in a language that was wildly his own. And so, he translated it to the common tongue of fashion to show us exactly what we were missing. This French designer, this fragile man who stoked his creativity until the coals burned black, revolutionized the way we wear and consider clothes, and in turn he had little else to give himself in his world of constructed beauty. Welcome to the world of Yves Saint Laurent.

Upon setting out to make a so-called biopic about the tumultuous success of Yves Saint Laurent, director Bertrand Bonello (House of Tolerance, The Pornographer) knew he wanted to steer away from just that: the success that we all know about, and how he came to it. For him, Saint Laurent needed to do more, to encapsulate the already burgeoning fame as it contradicts the inevitable inner demons and outer pressures that come with being one of the most lauded fashion designers of all time.

And so, he focuses his lens on one decade of YSL’s life between 1967-1976, an era which captures the most successful and the most melancholic periods of not just his career, but his life as a gay man, as a free spirit, as genius with nowhere to turn but inward. Using Saint Laurent’s collections as the background for what he experiences within, Bonello ultimately shows us that this could be any man with a dream, frustrated by his own fears that aim to halt him in his tracks. And this we can thank him for, because the result is a luxurious darkness, full of contrasting elements of beauty and ugliness, indulgence and frugality that unfolds rather than narrates as many biopics do.

We cannot speak any more of our character Yves Saint Laurent without exploring the man who brings him to life, Gaspard Ulliel (Hannibal, A Very Long Engagement). With the designer being a rather distinctive persona, with a singular voice, a certain gait and posture, and not to mention the sensual shyness that gave him the ability to instigate public curiosity without pandering to it, Ulliel had a lot to engage himself in.

Luckily, he took the challenge seriously by imbedding the quirkiness of his own personality into those of Saint Laurent. What we see is someone not entirely comfortable in his own skin or his own head, yet who exudes a whole other confidence that isn’t of this world. Perhaps that is his genius or perhaps a grand disillusionment he had about his own career, but either way Ulliel draws you into it.

What ultimately takes us out of the magnetism that Bonello fights hard to create in Saint Laurent, however, is that same notion of indulgence mentioned before. The greedily lush life, the torrid love affairs, and the copious amount of drugs are, yes, facets of this period that undermined the brand he gave his soul to create, but somewhere along the line Bonello loses focus as he attempts to serve his subject’s complexities on a platter. Perhaps trimming the two and a half hour running time could have streamlined his intention of creating an unpredictable force of artistic nature.

Bonello instead emphasizes style, which is admittedly imperative to a work on Saint Laurent. Shot on 35mm film by cinematographer Josée Deshaies (House of Tolerance), the period flare of the 60s and 70s becomes a centerpiece for the narrative. Split frames and long takes urge us to fall into this world of panache that endures alongside a world fraught with war and turmoil, again promoting a theme of coexisting disparities that is somewhat intoxicating to witness.

This is what Bonello does well, especially with talent like Ulliel at his side: taking the rich darkness of the designer’s life and comparing them to our own insecurities. This in turn equates him to our own fears of self, of failure, of disappointment, and even of grandeur. In this sense, Bonello asks us to check ourselves. Even geniuses like Saint Laurent can’t stand the madness, no matter how in vogue.

You can enter to win a Sony Pictures Classics DVD box set and a Saint Laurent movie poster.
Enter the Sweepstakes