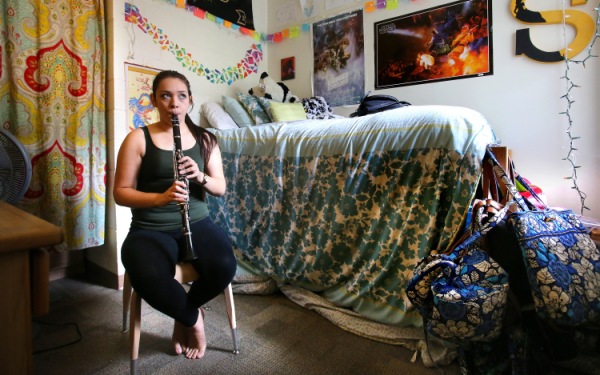 Shannon Lopez, a freshman from south Florida, practices on the clarinet in her dorm room at the University of Central Florida on Monday, April 27, 2015 in Orlando, Fla.
(Credit: Joe Burbank/Orlando Sentinel/TNS)

ORLANDO — When she moved in, the living room in her dorm looked like a lobby of a walk-in health clinic, and the white cinder-block walls reminded her of prison.

But this was home — Shannon Lopez reveled in the word — and she hung her “Star Wars” posters and photographs of her high-school marching band on her bedroom walls, hiding the white.

She recently marked the final days of the spring semester before students return to the awkward dance of moving back home for the summer.

Freshmen must deal with their parents’ expectations and acclimating to life back home, said Karen Hofmann, director of UCF’s Counseling and Psychological Services.

“It’s just not a vacation now,” Hofmann said about the next three months. “There’s another transition that students and parents are going to go through day to day.”

In some ways, Lopez is ready to let go and move on.

The night before, she had stayed up until 4:30 a.m., finishing her final project in her writing class. When she spell-checked it, her brain was in delirium, and she spelled many words wrong, to her dismay. She was tired.

She is ready to leave her college dorm — a room so small that throwing one shirt on the floor could make it look cluttered — and go back to her full-sized bed in her parents’ home outside Fort Lauderdale in Cooper City.

Lopez is excited for her summer trip to Peru, her father’s native land, where she will reconnect with nature. She won’t mind staying in a home that doesn’t have electricity or running water.

In between her travels, perhaps she could job shadow the event planner who orchestrated her Sweet 16 party. Lopez, a hospitality-management major, hopes to work for the theme parks someday.

She is ready to see her Cooper City best friends.

Lopez was part of a trio, a group of friends who met in high-school band and became close. There was nothing to do in her “rinky-dink” hometown, she said, so the three friends looked for random entertainment, like people-watching at the airport or visiting the fish at a nearby hunting-goods mega-store.

“Unconventional fun is a good way to put it,” Lopez said.

When they separated in high school, Lopez was the only one who went to UCF, the lone school she applied to. Her two friends chose Florida State University. They texted constantly when they were apart.

Lopez surveys her dorm room, still mostly unpacked. The checklist is taped to her front door, a reminder of everything she needed to do before she moved out.

Trailing down the hallway — and hanging from the kitchen ceiling, too — are pastel streamers that had been up for months.

College is sometimes random like that. Decorations when there was no party. Climbing to the top of the tallest parking garage on campus to watch the sunset. Driving on the back roads, looking for an adventure.

Lopez is friendly and outgoing; she figured it wouldn’t be hard to make friends in college. And it wasn’t.

Lopez, a clarinet player in the UCF basketball pep band, joined a sorority full of other music-loving students who reminded her of her quirky high-school friends.

“I know when I come back in the fall, they will be there,” Lopez said.

Already, she is plotting how to escape Cooper City and sneak back to campus during the summer.