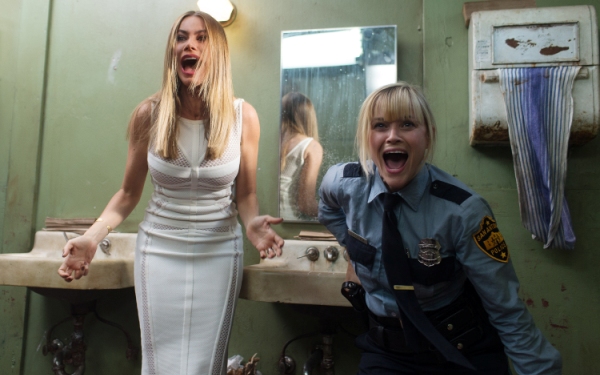 Behind Reese Witherspoon’s back, Sofia Vergara was lowering her eyelids in a mock, come hither stare. “You can really tell what Sofia is passionate about,” Witherspoon said, earnestly attempting to make a point about Vergara’s strong personal brand.

When Vergara started cackling, Witherspoon whipped around. “Why are you making that face? The entire time I talk she makes faces behind my back.”

Costars in the new comedy “Hot Pursuit,” Vergara and Witherspoon are physical and temperamental opposites. Petite, New Orleans-born Witherspoon, 39, is best known for her performances in dramatic movies like “Wild” and “Walk the Line” and comedies like “Legally Blonde,” and she cultivates a proper, Southern-belle persona filtered through a type-A personality.

Vergara, 42, curvy, born in Barranquilla, Colombia, is best known for her performance as feisty matriarch Gloria Delgado-Pritchett on ABC’s “Modern Family” and her high-profile brand endorsements such as “Cover Girl,” and she cultivates a spontaneous, hot Latina persona.

What the actresses share is a sharp business sense, which they brought to their work on “Hot Pursuit.” In the movie, which opens May 8, Witherspoon plays an uptight cop charged with protecting Vergara, the widow of a drug lord. The actresses, who developed the movie together, recently gathered with their “Hot Pursuit” director, Anne Fletcher — herself a rarity as a female director of studio comedies — for a candid conversation about money, media and the challenges of being women in show business.

Reese, you speak some Spanish in this movie. Are you fluent?

Reese Witherspoon: That would be seventh-grade Spanish.

Sofia Vergara: When I hear her speak Spanish I realize why I’m funny to Americans. It was one of the great scenes for me because I would see how she was struggling and suffering. It’s hard to really be acting when you’re translating. The emotion can’t come. So I enjoyed this because she was feeling what I feel every day.

You’re both credited as producers on this. How did the movie come about?

Witherspoon: There wasn’t a lot of development going on for female comedy. Whatever you want to do, you’ve got to sort of do it yourself. I was a big fan of Sofia’s, and I thought it would be a good idea just to talk and see if she even wanted to do a movie together. We talked about a couple of funny ideas, and this is the one we decided to develop together.

It really plays on our differences. I feel Sofia brings a particular perspective and a huge Latin American audience that’s rabid to see themselves on screen, and it’s way overdue considering how much Latin audiences show up to see films. She knows herself and her audience better than any actor I’ve ever worked with. What you don’t see you’ve got to make in the world. Nobody was developing a film like this.

Sofia, why do you think there is such a big gap between the size of the Latin movie-going audience and the number of films starring Latin actors?

Vergara: Mainly the problem is there aren’t Latin people creating content. Many of them are doing soap operas. It is a lack of Latin people writing. It’s not the fault I think of an American writer. Usually when you write, you write what you know about. I admire the people who write for Gloria in “Modern Family.” They’re mostly men. Mostly they’ve had wives like Julie Bowen’s character, but they’ve never had a Latin woman.

Anne, this movie has a scene where Reese and Sofia pretend to be a lesbian couple to get out of a jam, and a period joke. Did you think a buddy comedy starring two women required a different approach from one starring men?

Anne Fletcher: For me it was important not to take a male genre and slot women into it. One of the things in comedy now is making women act like men. That’s not funny to me. Women need to act like women. We’re very funny. We have a point of view.

As a female directing a studio comedy you’re in a very small group. Why aren’t there more women doing what you do?

Fletcher: I think it’s changing. The difference is women have to make the decision to have kids. We run out of time. In a typical heterosexual couple ... the woman takes care of the family.

Do you have kids?

No, I transitioned into directing, and it was one movie after another after another and ... you’re so focused on work that you forget about the personal life. You’ve got the drive, and you’re going, going. And then you go, “Oooh, I didn’t have that part of my life.”

Vergara: Like Tutankhamen. A mummy. You still have time to do all of that.

Fletcher: (laughing) I’ve got to get out of this town.

Witherspoon: I think at the fundamental beginning level we’re not nurturing female directors and writers at the same level that we should be. It’s incumbent on all of us to hire female interns, to let them come on sets to watch us work and we’ve got to encourage it. Also there’s this weird phenomenon, I don’t know if you’ve read Kirsten Gillibrand’s book, “Off the Sidelines,” about how do we get more women active in politics and every field. There’s an interesting phenomenon that women want to be asked instead of volunteering. We don’t raise our hands ‘cause culturally we see that as bossy.

Witherspoon: Actually you have to be a little bit assertive and self-promoting, and you kind of have to think you’re great, and that’s a quality we don’t foster. Women don’t say, “I’m actually a pretty good writer. I think I could be a really good director.” I do think it’s changing when I see people like Tina Fey and Amy Poehler and Amy Schumer going, “I don’t care what you think of me.”

Sofia and Reese, you’re both very active on social media. Do you pay someone to maintain your accounts or do you do it yourself?

Vergara: I do it myself. You have to keep it real ‘cause people are not dumb. I’ve been tweeting since 2010.

Witherspoon: It’s an incredible marketing tool. It’s a way to have direct communication with your audience. ... She kind of showed me the power of it.

Vergara: I taught her everything she knows.

Your costumes in this movie are pretty amusing. Where did Sofia’s “Butter My Biscuits” T-shirt come from?

Witherspoon: I think that was my idea. It used to say something worse.

Fletcher: Was it, because you know what it means, right? (Fletcher whispers in Witherspoon’s ear.)

Witherspoon: No, that’s not what it means.

Fletcher: Honey, that’s what it means. The MPAA poster people were like, “We can’t have that.” That’s why she has the sunglasses.

Vergara: Is that why? I was like, why do I have sunglasses there? I thought maybe there wasn’t enough cleavage and they needed to create a cleavage.

Reese, during the Oscars you shared the #Askhermore hashtag encouraging journalists on the red carpet to ask actresses about something besides their gowns. Did you feel like you got different questions?

Witherspoon: Yes. I did it about an hour before the show, and it wasn’t meant to say that the clothes aren’t beautiful or well made. It’s just, sometimes the conversation about women at the awards shows becomes so reductive and small, it’s embarrassing. We’re not models. They don’t spend any time asking men what they’re wearing.

Some of these experiences that I have where we sit around a roundtable with these experienced, accomplished actresses and the things I’m thinking are, “I wonder what happened when you did that movie or what was that director like” and they’ll literally ask us, “What did you think of Jennifer Lawrence’s nude selfies?” I’m like, “I don’t know Jennifer Lawrence. I have no perspective on that.”

Vergara (sniffing the air in the restaurant): It smells like truffles.

Witherspoon: Fine, get me off my soapbox.

Sofia, I read in Forbes that you’re the highest-paid TV actor ...

Vergara: Don’t listen to all the gossip.

Is that gossip? It’s Forbes.

Witherspoon: I think that’s amazing. We as women don’t communicate about how we’re doing financially. I was talking to this woman last night about young men who are actors who roll around with big entrepreneurs and they invest in Twitter and Uber and there’s not a lot of women rolling around that way. We need to be more candid about those conversations.

Vergara: At the end of the day, women buy more products than men. We are really who spends the money in the house.

Witherspoon: My daughter came home one day crying and said, “Mommy, somebody told me you made a lot of money ...” and I was like, “Why are you crying? ... I worked hard for that. You should never feel embarrassed about a woman doing well in this world.”