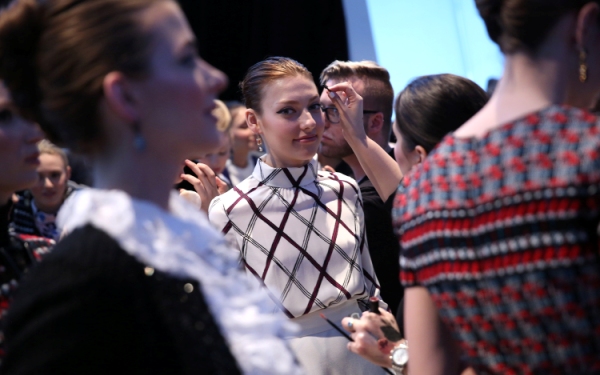 Peter Copping turned his life on its head when he accepted the head design job at Oscar de la Renta last year.

The new venture transplanted the British-born Copping from Paris — where he worked in relative anonymity at Christian Lacroix, Sonia Rykiel, Louis Vuitton and, most recently, as artistic director at Nina Ricci — to one of the highest-profile houses in New York City. Once there, he was to design alongside de la Renta through a transition period into the founder’s retirement.

Instead, Copping’s first day was the last goodbye to de la Renta, who died at age 82 in October. As the press descended and the pews filled at the memorial service — Hillary Rodham Clinton, Queen Noor of Jordan, Laura Bush — Copping felt the weight of the crown he was inheriting.

He heard the clock ticking, too. So Copping got to work designing the fall 2015 Oscar de le Renta collection. It debuted in February with Taylor Swift on one side of the runway and Barbara Walters on the other.

Copping ventured out to meet clients and show the collection in Chicago recently, in partnership with Saks Fifth Avenue at a charity event at the Museum of Contemporary Art. In his soft-spoken way, he chatted with me beforehand about his new life. This is an edited transcript.

Q: Do you feel a sense of ease now that you’ve finished your first collection?

A: Yes and no, because as you know it’s pretty full-on in the fashion industry. That show was over but I was already late on the next one, so I had to get going on that. And we also do a bridal collection, so it’s quite intense. By the time the first show is over, you’re already starting to think about the next one.

A: I don’t think it needs turning on its head. I’m very on par with what Oscar always stood for, in my previous work. It was Oscar himself who recruited me. I think they knew (the house) was in safe hands.

Q: Was there something that was said at the memorial service that stuck with you as you’ve been designing?

A: People often speak about his personality and that trunk shows and being out and meeting his clients was very important to him, so it’s nice being here and carrying that tradition on. That’s something I very much enjoy doing. It’s an education to meet the women who actually buy the clothes and the people who sell them.

Q: What is some of the feedback you’ve gotten so far on your first collection? I understand a cocktail dress with ornamentation on the sleeves is a best seller so far?

A: Yes, a fitted black stretch wool dress with the sleeves decorated in diamante embroidery. I like the idea of decorating the sleeves; I thought maybe it was a newer place to put embroidery. It was the best-selling cocktail dress. That does kind of indicate that people are looking for new products as well.

Q: How do you juggle the longtime clients with the new — Barbara Walters on one side at the show and Taylor Swift on the other?

A: If you work back to the feminine aesthetic, that’s something that appeals to a lot of women and a lot of different age groups. You could have pieces that easily appeal to both women and then have some more suited to one than the other, whether defined by length or whether it’s got a sleeve.

Q: The family of de la Renta came to you initially and at that time you weren’t ready, but then they came back around. What changed your mind?

A: I’d been in Paris for 20 years and I enjoyed living in the city, but I don’t know that it’s a brilliant time for Paris at the moment. I think it’s lacking a little bit of energy. And then just taking stock of things, I thought this is a really great house. I always admired what Oscar had done and I could see myself there.

Q: What’s New York like for you after being in Europe?

A: It feels like home. I live in the West Village; I think that’s why, because it’s quite contained and green and there are small residential streets rather than skyscrapers. I think it’s probably the most European side of New York.

My partner and I shipped all of our furniture from Paris, and it worked pretty well in the space. The apartment looks quite different, I have to say, because our apartment in Paris was quite a special place; it was neo Gothic and the interior had been shipped in from a 17th century Spanish palace, so we had huge fireplaces and leaded windows and carving and moldings. I think you can find that in New York as well; I have some friends on the Upper East Side in a similar sort of building. But the one we’re in is a brownstone; it’s much lighter and airier, and our cats like it. So that was the main thing, to keep them happy.

Q: Where do you draw your inspiration?

A: Anywhere. I like buying books, I like exhibitions. I came to the David Bowie exhibition in Chicago at the end of last year. And you know, it’s not necessarily anything direct but it can be one little thing that triggers something. I also discovered quite recently Pinterest. You can pretty much find everything on there. It’s a nice way to look at things because I don’t have that much time to do research, which is a little bit frustrating. Vintage clothing is another place where I find ideas.

Q: Is there a vintage piece lately that’s informed something you’ve designed?

A: I quite like looking up ’50s pieces, and sometimes it’s more the inside of them than the outside. It can be for details that are quite hidden but I think it really helps define a truly luxurious product; the grosgrain ribbons, the corsetry, or some of the labels are very nicely placed. That’s one thing I’m quite strong on are the details on the clothing.

Q: The plan was for you to work alongside Mr. De la Renta; that didn’t happen. Did that have any advantages or mostly challenges?

A: Being English and quite a practical person, I just got on with the situation. I missed out spending time with him where I could have gotten to know more what was important for him. And another thing I’d have liked to have known is what he hadn’t achieved that he had wanted to achieve. Obviously, I didn’t have time to do that. So I’ve really relied on a lot of people either in-house or some of his close friends to just get information about him.

Q: What is something that someone has told you about him?

A: I had lunch with Carolyne Roehm, who was one of his design assistants for quite a long time. One of the things she said was when Oscar put jewelry on, he always put a lot of it on. So in some ways in this collection I wanted to pare that back. I thought sometimes the dresses are enough by themselves. When we did use jewelry I layered three different necklaces up — quite eclectic mixes of semiprecious stones and diamante jewelry. It was refining what my vision was of the same type of thing (Oscar did).

Q: You were on holiday in Ibiza when you took this job, correct?

A: When this all came together and the contract was signed, yes. My partner and I used to rent the same house for the last eight years. It has a reputation as a party island, but you can really escape there and have a very, very quiet time cut off from everything. We did have a lot of friends in the house with us, so we couldn’t really speak about (this job) or didn’t want to, so we did have to sneak off. It all seems like such a long time ago.

Q: Did Mr. De la Renta express anything to you in the time you did have with him about what he hoped you would do?

A: Not really. He said it’s going to be great, we’re going to have so much fun. From that, I gather Oscar really enjoyed his work, he loved being in the studio and surrounded by people. Again, that’s something that’s important for me to carry forward.

Q: Is there one look from the fall collection that you really feel proud of, where you feel like you nailed it?

A: Every single one of them (laughing); no way it’s just one! No, let’s have a think. There is, um, I like very much how the beginning of the collection looked, the blouses with tweed skirts, the broken suits. I like how that came together, then mixed with graphic prints, then some of the cocktail dresses. There’s one that’s black and navy blue and jet-beaded; it’s got lots of strips of organza, very narrow strips and the beading is on top of those. You probably have to look at it closer to really see the workmanship, but when that came together, I was happy with it. The white evening dress with large rose embroidery on it, the bustier dress; that feels very much like an Oscar dress. I was happy there were pieces like that that felt very true to the spirit of the brand.

Beauty Beat
Shake things up with your makeup this pandemic season
1,448 views

Beauty Beat
The best self-care? 8 great ways to sink into a warm bath for a much-needed break
1,410 views

Beauty Beat
How to apply makeup in a masked world
1,539 views