Behind their charms, single-sex colleges struggle with their nature 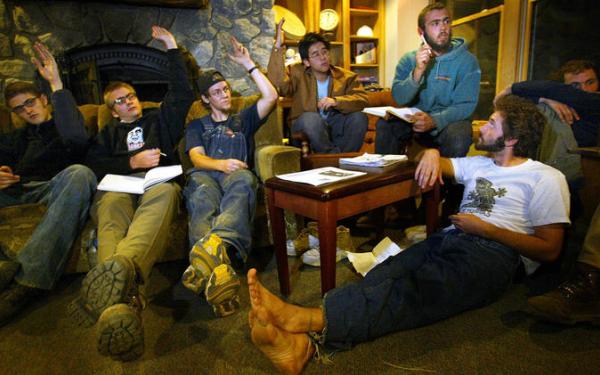 The names of the two colleges -- Sweet Briar and Deep Springs -- are redolent of bucolic campuses. One is in rural Virginia, in the foothills near Lynchburg, and the other is in California's high desert ranch lands east of Bishop.

But the names of the schools are now linked by something else: the struggles of the dwindling number of single-sex colleges to survive or possibly become co-ed.

While the circumstances and finances of the two schools are quite different, the debates about their futures raise questions about how important single-sex education has been for women at Sweet Briar and men at Deep Springs – and to what lengths alumni and others will go to sustain or end those traditions.

Over the last 50 years, the ranks of women's colleges have been greatly reduced. By letting men in or by closing altogether, their number dropped from 230 to 46, according to the Women's College Coalition organization. Much of that decline occurred in the late 1960s and early 1970s as many men-only schools, including those in the Ivy League, started to admit women. Very few colleges remain just for men.

Some schools, including Mills College in Oakland and Mount Saint Mary's University in Los Angeles, maintain women-only rules for undergraduate programs and enroll men in graduate studies. Mills infamously tried to go fully co-educational 25 years ago but reversed course after a noisy revolt and campus occupation by students.

The governing board of Sweet Briar stunned the 114-year-old campus and the wider academic world in February when it announced that it would close the school this summer. Administrators cited decreasing enrollment, the difficulty of getting high school graduates interested in a single-sex college and the campus' relative isolated location, which president James F. Jones said was "30 minutes from a Starbucks."

Later, it emerged that the 700-student school faced large bond repayments and that its leaders were concerned about a possible default despite a healthy endowment and its $47,000 annual charges for tuition, room and board. Even enrolling men wouldn't help, officials said.

The faculty and local county government in Virginia are suing to stop the closure. Alumni also are protesting and may join in legal efforts to save the school, which was known for its equestrian teams and solid engineering and liberal arts programs.

Although some single-sex colleges face uncertainties, they are not doomed, according to David L. Warren, president of the National Assn. of Independent College and Universities.

"There is no doubt there has been a winnowing in the number of these institutions nationally. But good leadership by boards and college leaders, and a continued commitment to single-sex education combined with smart business plans and innovative curriculum will enable many of the current institutions to thrive in the years to come," he said.

The survival of women's colleges is important to help produce the next generation of female leaders, especially among minorities and students who are the first in their families to attend college, said Michele Ozumba, president of the Women's College Coalition. While such schools don't appeal to a large swath of high school seniors, enough young women would consider single-gender colleges as "a pathway to success" if colleges work hard enough to recruit them and explain the educational advantages they can find there, she said.

In contrast to Sweet Briar, Deep Springs is not in danger of closing. Still, change is in the desert air.

The tiny two-year school has been a draw for brainy cowboy-scholars since its 1917 founding. Its 28 students pay no tuition and follow an unusual program that combines reading classics and pitching hay on the 120-square mile ranch. Many go on to attend elite colleges for bachelor's degrees.

The all-male college flirted with co-education several times in the past but never moved formally in that direction until 2011, when its board voted to start admitting women in 2013. Maintaining a men-only school was no longer good preparation for the students' future, officials said.

Those plans, however, have been stalled by a legal challenge from alumni who contend that enrolling women would violate the campus' founding trust and original mission to educate "promising young men."

In November, an Inyo County Superior Court judge ruled that the trust's wording could be changed and the school's mission widened to educate the gender-neutral "promising young people."

Deep Springs "would offer a far more effective program as a coeducational institution," the judge wrote. The matter is now expected to be heard by an appeals court and there are no immediate plans to enroll women, according to the school.

Outside of seminaries and institutions that place religion as their prime mission, the number of men's colleges in the United States has dropped from more than 250 five decades ago to just four today, in addition to Deep Springs and a vocational institution, according to federal statistics. Those are Hampden-Sydney College in Virginia, Morehouse College in Georgia, Saint John's University in Minnesota and Wabash College in Indiana. (Morehouse and Saint John's have affiliated women's' colleges nearby and allow cross registrations for classes.)

Some officials at those remaining men's colleges defend their policies with an argument that echoes older positions supporting women's schools. In the last 10 years, male college enrollments and graduation rates lag those of women. Men-only colleges, they contend, can help close that gap with special attention to those students.

Do single-sex colleges preserve valuable traditions? Or is such an education outdated and destined to disappear? The numbers will tell in the coming years.