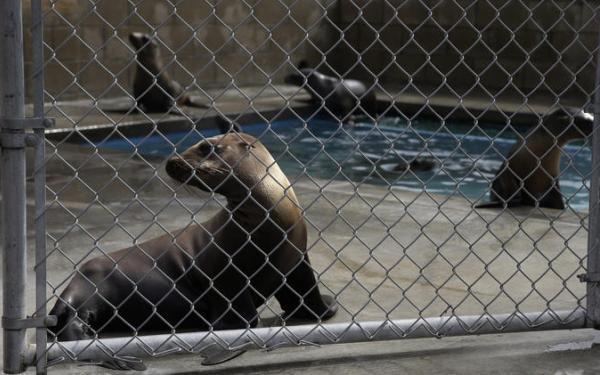 Aid groups have already been scrambling to keep up with injured or sick sea lions washing ashore. Now, police say, even the waters of an Orange County treatment center are threatened.

The Laguna Beach Police Department is trying to identify the person or people who last week put chlorine into the water filtration system at the Pacific Marine Mammal Center, which works to rescue, rehabilitate and release the creatures.

Police believe the attack was intentional and occurred sometime between 8 p.m. April 27 and 6 a.m. April 28.

On the morning of April 28, an employee entered the center and noticed a strong smell of what seemed like chlorine or bleach, Laguna Beach police Sgt. Tim Kleiser said. The employee saw that the animals were out of the water and felt her own eyes beginning to burn.

The chlorine had contaminated one of the facility's saltwater pools, where 17 rehabilitated sea lions swam, according to a police statement. The animals were set to be released the following day, but all were affected by the chlorine.

Fifteen sea lions had swollen eyes and were diagnosed with varying degrees of corneal ulcerations. Seven continue to receive veterinary treatment. None has been released, Kleiser said.

“I don’t know why someone would ... do this,” Laguna Beach police Capt. Jason Kravetz said. “It’s very sad. And [the sea lions] can’t defend themselves.”

Police are looking at all angles: past employees, anyone who may have come to visit, any source of threatening messages. They have interviewed people with access to the facility and are reviewing surveillance footage of the building, though not much is visible.

Kravetz said detectives looked into whether someone at the center could have accidentally added the chemical to the tank, but all the chlorine kept on site was accounted for, meaning the perpetrator must have brought what he or she dumped.

All the animals are expected to heal eventually, said Kravetz, who compared the injury to what a humans would suffer if they jumped into a pool with too much chlorine.

A representative of the Pacific Marine Mammal Center could not be reached for comment.

Laguna Beach detectives have partnered with National Oceanic and Atmospheric Administration investigators to pursue federal and state charges that could include animal cruelty and violating the Marine Mammal Protection Act, Kravetz said.

Each of those crimes can carry a $20,000 fine and a one-year jail or prison term, according to police.

Authorities asked that anyone who noticed anything suspicious around the center near the time period of the attack call Laguna Beach detectives at (949) 497-0377 or the NOAA hotline at (800) 853-1964.