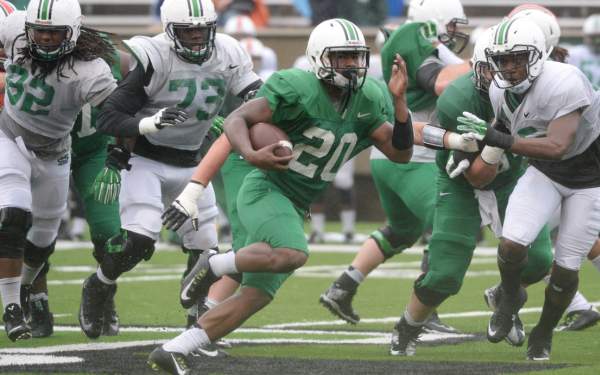 Marshall University football player Steward Butler has been dismissed from the team over his arrest Wednesday morning for allegedly punching two gay men after shouting derogatory slurs toward them in April.

Huntington police say the FBI became involved and said the act would be considered a federal civil rights violation, then turned the case over to U.S. Attorney Booth Goodwin’s office.

University officials first announced Wednesday that Butler would be suspended indefinitely, then Athletic Director Mike Hamrick announced on his Twitter account Wednesday afternoon that he and head coach Doc Holliday had decided to dismiss Butler “in light of additional information regarding his charges.”

“We take all accusations against our student-athletes seriously, especially those of such a sensitive nature,” Hamrick said in a news release. “We hold all of our 350-plus student-athletes to a high standard, on and off the playing surface, as ambassadors of Marshall University.”

Butler allegedly hit the two men on April 5, after he saw them kiss at Fifth Avenue and Ninth Street, in Huntington. Butler, who was the passenger in a passing vehicle, allegedly got out of the vehicle, shouted derogatory words related to their sexual orientation, then punched both men in the face.

Detective C.M. Sperry of the Huntington Police Department said the attack took place at about 3:30 a.m. One of the alleged victims recorded the attack on a cellphone. Sperry said the video was likely the “additional information” Hamrick referred to when announcing Butler’s dismissal.

Sperry said the couple had been attacked before, while at King’s Island, and had decided, if it ever happened again, they would record it.

Sperry said the extent of injuries included bruising and redness of the face. He said the alleged victims seemed to be doing fine now, and that they seemed relieved that an arrest had been made.

He also said the FBI had submitted its report to Goodwin’s office and told police they considered the attack a civil rights violation.

Assistant U.S. Attorney Steve Ruby, who said Goodwin was unavailable Wednesday, said the office is still looking at the case.

“We’ve been briefed on it,” he said. “We certainly will review it. We just can’t comment beyond that.”

The Herald-Dispatch reported that Butler turned himself in Wednesday morning and was released on $10,000 bail.

Three weeks after the alleged assault, in Marshall’s spring football game on April 26, Butler was the Thundering Herd’s top running back. From 2012 to 2014, Butler carried the ball 295 times for 2,063 yards.

Butler remained enrolled at Marshall on Wednesday. Gary G. White, interim president at the Huntington university, issued a statement saying the school would allow the legal process to run its course and would abide by the Student Conduct System and Code of Student Rights and Responsibilities.

“The entire university community is shocked and disappointed to learn the details surrounding the alleged actions that led to Mr. Butler’s arrest this morning,” he said Wednesday. “The type of violent, bigoted behavior reported to have been perpetrated by this student is not tolerated at Marshall University.”

Butler is charged with two counts of misdemeanor battery. His case does not qualify for the state hate-crimes law, which considers “race, color, religion, ancestry, national origin, political affiliation or sex.”

Those who “willfully injure, oppress, threaten, or intimidate or interfere with any citizen” because of one of those characteristics can be charged with a felony and face up to 10 years of imprisonment.

Fairness West Virginia, the state’s LGBT rights organization, sent a statement in support of the suspension.

“We hope that this reprehensible behavior can ultimately lead to greater education, understanding and acceptance of LGBT people,” Andrew Schneider, Fairness executive director, said in the release. “By nature, hate crimes target innocent victims simply because of the color of their skin, their religious views, or in this case, the sex of the person they love. Hate-based violence fosters anxiety and mistrust and ultimately brings fear to whole neighborhoods, communities and towns. There is no place for violence or intolerance in any community in West Virginia.”

Schneider noted that Huntington passed an LGBT-inclusive nondiscrimination ordinance in 2013 but said that, clearly, more work needs to be done.

“We hope that this inexcusable behavior begins a public dialogue leading toward greater understanding and acceptance of fellow LGBTQ citizens,” she said. Reach Erin Beck at erin.beck@wvgazette.com, 304-348-5163 or follow @erinbeckwv on Twitter.