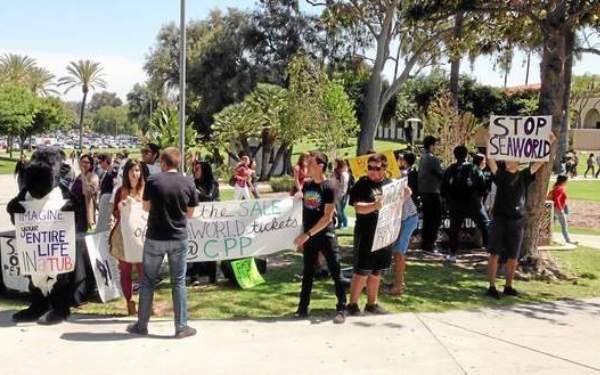 Students at Cal Poly Pomona gather in what officials have said is the “designated free speech zone” on campus — 154 square feet between the library and student center on April 9.
(Credit: Beau Yarbrough)

A month after a Cal Poly Pomona student sued the university over a policy that limited political speech to permit-holders standing in a defined area on campus, the university has said it will not enforce the policy while the matter is being litigated.

“We have agreed to a standstill while we go through negotiations,” Cal Poly spokeswoman Esther Tanaka said Wednesday. “We’re pleased that the negotiations have been productive.”

On March, 31, a lawsuit was filed in U.S. District Court in Los Angeles on behalf of Nicolas Tomas, 24, a senior majoring in nutrition, an animal rights activist. Tomas has been handing out Vegan Outreach pamphlets since the fall of 2013. His preference was to giving them out near the university’s parking garage, to take advantage of the high amount of foot traffic in the area. But, he said in April, he routinely heard from administrators, demanding that he leave if he did not possess a permit.

Last fall, he met with administrators who told him he had to stand in a triangle of grass, 154 square feet in area, formed by sidewalks running between the university library and Bronco Student Center.

The California State University system has no such “free speech zone” policy, according to a CSU spokeswoman, and the system’s own Free Speech Handbook argues against sweeping restrictions on speech.

Tomas ignored what he believed was an unconstitutional demand and, on Feb. 4, while distributing flyers near the university’s administrative building, university police shut him down, an incident he caught on video.

He reached out to FIRE, the Foundation for Individual Rights in Education, a non-profit that advocates for free speech on campuses. They brought in high-powered First Amendment lawyer Robert Corn-Revere, who filed the lawsuit on Tomas’ behalf.

On Wednesday, the university — which has been in settlement talks with FIRE, according to the non-profit — announced it would suspend the policy for now.

“We’re very hopeful based on the university’s recognition that the current policy is problematic and cannot stand,” said Will Creeley, vice-president of legal and public advocacy for FIRE.

Students will not be required to check in or register, although off-campus individuals will still need to check in with the Office of Student Life and display a permit, similar to what outside vendors have to display.

“I’m still waiting for them, hopefully, to announce it,” Tomas said Wednesday. “I hope that students hear it and know they can voice whatever they feel passionate about.”

The scrutiny from the university has made him uncomfortable, he said, and he hasn’t handed out any leaflets or protested in weeks. After Wednesday’s announcement, though, Tomas said that may change:

This isn’t the organization’s first time waging this particular battle: Tomas’ suit is the ninth such filed as part of FIRE’s Stand Up for Speech Litigation Project, according to a news release from the organization and the third filed against a California college or university. Modesto Junior College and Citrus College have previously settled their suits, changing their free speech policies and paying monetary settlements, $50,000 for Modesto Junior College and $110,000 for Citrus College.