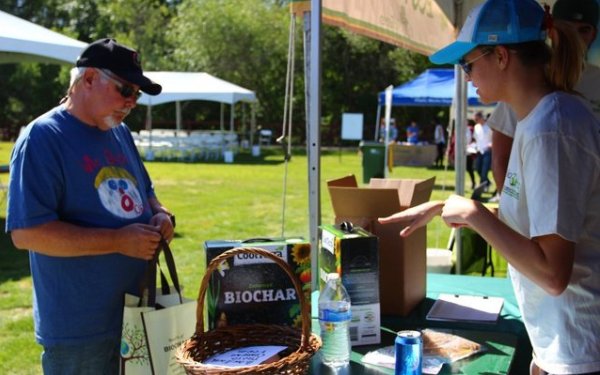 THOUSAND OAKS, Calif. - If you already know what biochar is, chances are you heard about it from a California Lutheran University student.

This past semester, a group of students in an advertising campaign course spearheaded a project on biochar. They talked to shoppers about the product at The Oaks mall, sold the product at Arbor Earth Day and all this week, biochar commercials will appear before the films shown at Janss Marketplace 9 and Muvico theaters in Thousand Oaks.

Biochar is a charcoal product used in soil and fertilizers to help plants retain water. It is produced by heating up wood, leaves and other organic matter to form a porous substance. It’s a relatively new product that is gaining traction as the state enters yet another year of serious drought.

“You add it to your plants or your lawn and you water it like you normally would,” explained Andrew Vu, 22, a business marketing major at Cal Lutheran. “It holds the water at the roots.”

Vu and his classmates have become unofficial spokespeople for this charcoal product. He has practically memorized every biochar detail and even persuaded his parents to use it for their lawn.

That’s because Vu and the other students are treated like a professional advertising agency in the course taught by Jean Sandlin. The students researched the product and conducted community surveys. They even had a client in the form of the city of Thousand Oaks, which put in $2,500 for the campaign.

The students formed groups and responded through a traditional request for proposal process, pitching their public awareness campaign to the city. They worked on a mobile app and will soon post a podcast and an e-book on the city’s Go Green website.

“Most people associate advertising campaigns with consumerism,” said Sandlin, assistant professor at Cal Lutheran. “This shows students that advertising can be a greater good.”

Spreading the word about a niche product wasn’t always easy. It was sometimes challenging to stop shoppers for a discussion about the properties of organic biomass.

But during Arbor Earth Day last month, the students sold 100 boxes of biochar, doubling their personal goal. They partnered with Cool Planet, Art of Hydro and Blue Sky Biochar, local companies that manufacture or sell the product.

It helped that biochar has produced strong results for those who have used it.

Last year, the city started using biochar for the lawn outside the Civic Arts Plaza and water usage has been cut by half, said John Brooks, senior analyst for the public works department.

The Conejo Recreation and Parks District is hoping to reduce its water usage up to 36 percent in the following year and is looking at biochar as an option.

To read more about biochar and the students’ advertising campaign, visit toaksgogreen.org.