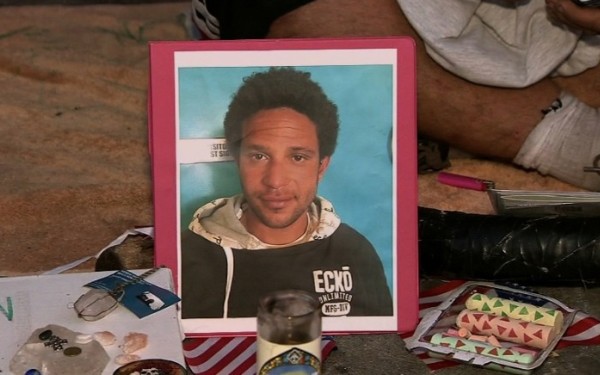 The fatal police shooting of an unarmed homeless man near the Venice boardwalk Tuesday night had investigators turning to an increasingly reliable witness: video.

Sometimes the images captured by a camera or cellphone help justify an officer’s use of deadly force. This time, however, police officials didn’t like what they saw.

Less than 16 hours after the deadly encounter, Los Angeles Police Chief Charlie Beck stood before reporters and said he was “very concerned” about the shooting, which was recorded by a security camera.

The LAPD’s investigation into the death of the man, Brendon Glenn, is ongoing. The shooting will be reviewed by the civilian Police Commission, its inspector general and the district attorney’s office.

The two officers involved in the shooting have been removed from the field.

Craig Lally, president of the union that represents rank-and-file police officers, criticized Beck’s comments as “completely irresponsible” considering the investigation was still in its “early stages.”

“We encourage everyone to reserve judgment until the investigation has run its course, and the facts are collected and assessed,” Lally said in a statement.

But the chief’s remarks indicate the video will be a key piece of evidence in the investigation, as others have been in recent high-profile incidents involving the LAPD.

Two months ago, when officers fatally shot a homeless man on downtown L.A.’s skid row, Beck held a news conference and pointed to frame-by-frame stills of a cellphone video that he said showed the man reaching for one officer’s holstered gun, prompting others to open fire.

That shooting was also captured by body cameras worn by two of the officers, a preview of evidence to come as the LAPD expands its use of video technology. The department is moving forward with plans to put a body camera on every officer and install cameras in more of its patrol cars.

The public has increasingly come to expect that controversial police encounters will be captured on video. And when they aren’t — such as last summer’s fatal shooting of Ezell Ford Jr. in South L.A. — residents often express concern about what happened.

“The focus on police is here, it’s now and it’s staying,” said Greg Meyer, a retired LAPD captain and use-of-force expert. “It will become more intense in the coming months and years as more and more people video police with cellphones, and as more and more officers are issued body-worn cameras.”

Charles “Sid” Heal, a retired L.A. County sheriff’s commander, described video recordings as “silent witnesses” that may not show the totality of an incident but “provide a big missing piece of the puzzle.”

“Look around,” he said. “It’s 2015. You cannot do anything on planet Earth and assume someone isn’t taking a video.”

That was evident Wednesday morning, as a crowd gathered in front of the yellow police tape blocking the stretch of Windward Avenue where the shooting occurred. Tourists and cyclists pulled out their cellphones and began recording as a small group of people shouted and cursed at police.

LAPD officials said two officers went to Windward Avenue about 11:20 p.m. Tuesday because someone reported a homeless man with a dog “harassing customers” outside a building. The officers talked to the man briefly, the LAPD said. When he walked toward the Venice boardwalk, the officers returned to their patrol car.

The man, who acquaintances said went by the name Dizzle, was pronounced dead at a hospital.

A security camera on a building captured the incident. Beck declined to elaborate about what was on the recording, but said he did not see “the supporting evidence that I normally would,” such as a person trying to arm themselves.

On Wednesday morning, as a gray marine layer hung heavy over the Venice boardwalk, those who knew Glenn described him as a kind man who constantly told people he loved them. He was known for his “hand hugs” — grabbing hold of someone’s hand before saying goodbye. Glenn treated his black Lab mix, Dozer, like “his baby,” one man said.

But they acknowledged he also had his struggles.

“He was a drinker. He has a drinking problem,” said Allison Holden, 23, who is also homeless. “But we all have problems.”

Glenn’s friends acknowledged he would sometimes be vocal when he drank — one mentioned “a little mean streak” — but said they had never seen him be aggressive.

Tim Pardue, who manages a homeless center on Windward Avenue, said Glenn stopped by the center Tuesday evening and admitted he had been drinking since 11 a.m. He left about 8 p.m., thanking Pardue for the noodles and crackers he had given him.

At some point, he stopped to visit with other friends, including Bill Hinson, 37. Hinson said his friend told him he wanted to find some money to buy a beer, and took off for the boardwalk.

About 11:30 p.m., gunshots broke out. Pardue said he walked out of the center and saw Glenn on the ground.

Holden stood among the people at the shooting scene Wednesday. As others shouted at police, she knelt on a curb and wrote a message on a small white towel. She stood and held the towel toward the officers.

“No justice, no peace,” the green letters read. “We love & miss Dizzle!”