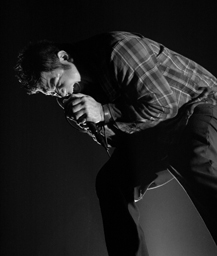 True to fashion and title, this year’s Taste of Chaos tour was as much an uncoordinated circus behind the scenes as it was a high-octane and eclectic mix of bands on stage. But at least the bands know how to do it right, living up to their reputations as some of the best performers around.

Starting the night on a softer note, dredg played songs from its latest release, Catch Without Arms, and its entirely too unrecognized previous, El Cielo. As singer Gavin Hayes belted evocatively, his lyrical poeticism might have unfortunately been lost on an audience waiting for screaming and power chords.

As I Lay Dying would follow to scratch that itch, and easily earned the title of loudest band of the night. The San Diego metalcore act was cohesive and engaging, all while its members shredded and pounded impossibly fast on their instruments. If nothing else, any band that can throw that much sound at an audience deserves some respect. A little less serious, Story of the Year were back up to old tricks again, coordinated jumps and all. Nothing we haven’t all seen before, but they’re just so likeable it’s hard to complain.

Up to this point, the “side stage” cubicle was filled with a lot less inspiring acts between headliners. Yawn inducing no-names, Adair and Greeley Estates, showed themselves to be the poor man’s Story of the Year and Bleed the Dream, respectively (FYI, Bleed was on last year’s Chaos). But hey, at least they both had wicked cool hair throughout completely unoriginal sets, right?

Luckily, Pelican would set the side stage back on track after snoozeXcore Greeley and would be the greatest surprise of the night. As odd as a no-vocals band may sound, especially on this tour, the Chicago foursome sure made instrumental songs sound very badass.

Bringing quite the opposite means of expression, OC rockers Thrice always have a lot to say and singer Dustin Kensrue loads each word with a few hundred pounds of infused symbolism. Showing the full breadth of its musicianship, the foursome went from the heavy and pounding “Silhouette” to the anthemic “Music Box” to the impassioned “Red Sky” with fluid musicianship. Closing with the too rarely played “Stare at the Sun” and old-school favorite “Deadbolt,” Thrice showed why it sets the bar for artistic integrity in modern rock.

Following Street Drum Corps’ unfailingly energetic and fun set, overflowing with more charisma than anyone would expect from three guys banging the hell out of like, everything, the long awaited headliners nonchalantly ambled on stage. As if it hadn’t been forever since the Deftones last paid us a visit. From “My Own Summer” to the never unpopular “Change,” Chino made lots of noises humans shouldn’t be able to make, the rest of the band thrashed along, and all was right with existence again. OK, so maybe all the chaos was worth it after all.
Article posted on 4/10/2006
This article has been viewed 1155 times.