Convictions but no prison in hazing death of NIU student 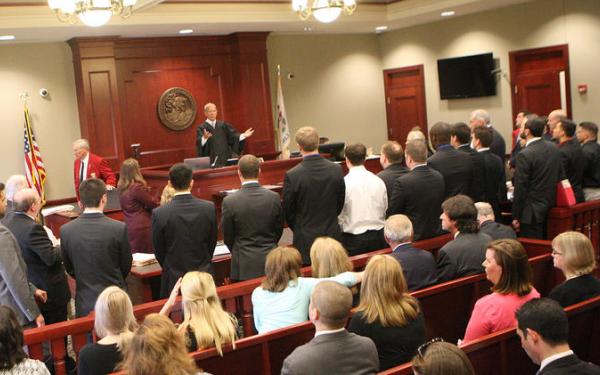 22 former members of a Northern Illinois University fraternity stand before Judge Thomas Doherty on May 8, 2015, as they waive their rights to a trial stemming from the hazing death of a student.
(Credit: Danielle Guerra, Daily Chronicle)

CHICAGO — Former members of a Northern Illinois University fraternity were found guilty of misdemeanors Friday for their roles in the death of a pledge who died at their house after a night of heavy drinking 2 1/2 years ago.

Those found guilty included five former leaders of the Pi Kappa Alpha fraternity who had been charged with felony hazing in connection with the death in 2012 of David Bogenberger, a 19-year-old finance major from Palatine, Ill. The five were convicted of reckless conduct and avoided a prison sentence.

Seventeen others who were charged with misdemeanor hazing were found guilty of that charge.

All 22 were sentenced to 100 hours of community service and given fines and either 24 months of conditional discharge or supervision.

One by one, those charged appeared at the bench in the DeKalb County Courthouse in Sycamore.

After that, victim impact statements were read by Bogenberger’s family.

The former fraternity members made no comments in court aside from answering basic questions. They left the courthouse without comment.

On the night he died, David Bogenberger participated in a pledge party that entailed going to various places in the fraternity house, answering questions and downing shots of alcohol.

It was part of an annual ritual known as “parents’ night,” an alcohol-infused party in which senior members of the fraternity and associated sororities are assigned as mentors to new members. Bogenberger had recently pledged the house in an effort to make friends at his father’s alma mater.

The fraternity chapter had not alerted NIU to the event — a violation of campus rules — and authorities alleged that the fraternity kept the party quiet so it could evade university oversight.

Bogenberger was found dead the next morning, and an autopsy later showed that he had suffered a fatal cardiac event because of the liquor consumption. His blood alcohol level was 0.40, which is five times the state’s legal limit for driving.

A month later, more than 20 party participants were charged with violations of the state’s hazing law. Most faced misdemeanors, but the five officers were charged with the felony version for knowingly requiring Bogenberger to drink alcohol as a condition of induction.

NIU suspended the fraternity chapter in the wake of the death, and the party participants faced school disciplinary proceedings. The Bogenbergers filed a lawsuit against Pi Kappa Alpha, but a judge dismissed it last year, ruling that the fraternity could not be held liable.

Attorney Peter Coladarci, who is representing the Bogenbergers, said Tuesday that he will file an appeal in the civil case within the next few weeks.

Gary Bogenberger said earlier this week the party had no purpose other than to get the pledges so inebriated that they would do and say foolish things.

He said he hopes the attention will raise awareness of fraternity alcohol-related deaths, which he said are on the rise.

“Nothing will bring David back. Our only hope is that this can be a catalyst for change,” Bogenberger said.

(Ward is a freelance reporter.)