Anti-Flag: Doing it For the Cause 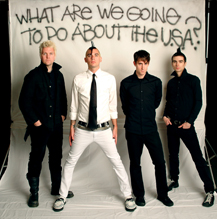 Positioning themselves as punk’s leading political activists, the members of Anti-Flag have their fans at hello, literally. Their striking ability to silence an entire room of mohawked misfits in the name of peace, or rile a crowd up into a flailing frenzy of pissed off punks just goes to show that, like it or not, people are paying attention to what they have to say.

Not everyone agrees with Anti-Flag’s extreme left-winged views – some actually just dig the band for the music – but the group is undoubtedly inspiring others to do some fact checking of their own.

While Sane learned the ropes through his activist family, others such as Thetic learned it was necessary to go out and figure things out on your own.

“My family was not necessarily politically active, we had a lot of discussions about politics. One of the things we did as a family, was talk about [different] issues,” he says. “I didn’t agree with my parents on anything so I had a chance to express my ideas and figure out what I believed in and what I didn’t.”

The first thing Thetic remembers taking a stand against was a toxic waste incinerator in Ohio.

“It’s burning toxic wastes and everyday in Pittsburg we are breathing it in,” he says. “It’s a lesson on how great activism can be and how difficult the process can be. There are still people protesting it and trying to make people aware of it, but it’s an uphill climb everyday to get out there, but at the same time it’s an empowering thing to do.”

Though social injustices and issues collectively motivate Anti-Flag, the band isn’t the America-hating fivesome it is often misconceived to be. In all actuality it is quite the contrary.

“People think we are this angry band,” Thetic says. “The reason we do the things we do is because we believe things can be better, and we are looking for those ways for things to get better.”

With Anti-Flag’s seventh full-length album and debut for RCA records, For Blood and Empire, it’s clear the band has plenty to say. The 12 angst-ridden political anthems, call out the White House, the biased media, military recruitment and war crimes – and that only begins to scratch the surface.

Today, Anti-Flag has its hands full of issues its members are getting behind and getting the word out about. Foremost on their list of causes they’re fighting against is the No Child Left Behind Legislation – which states that all federally funded schools give students’ personal records over to military recruiters for recruitment purposes – and Depleted Uranium which is used in military weapons and considered to be our Agent Orange.

“Depleted Uranium is something that nobody is talking about and it’s a pretty big issue. That’s what we try and do as a band. We’re not here saying look how smart we are. We don’t know anything about this stuff either. People bring it to our attention and we’re like ‘wow that’s messed up,’” Thetic says.

With a year of touring ahead of them, Anti-Flag’s members plan on using the time center stage to talk about the issues and get other people talking as well.

“We are much better activists when we have our instruments on,” Thetic says. “People don’t care about what we have to say when we are just dudes walking down the street. We are guys in a rock band, but we feel as though the discussion of these issues will help us find answers.”

And so, these eternal optimists believe that change is indeed tangible, with a little hard work – something the band knows a lot about.

“Activism and social change is a long difficult process, but if you can find little things that you can bite off and try to act on, on a small level, it helps you get through the day,” Thetic says.

For Blood and Empire is currently available. For more information, visit www.anti-flag.com.