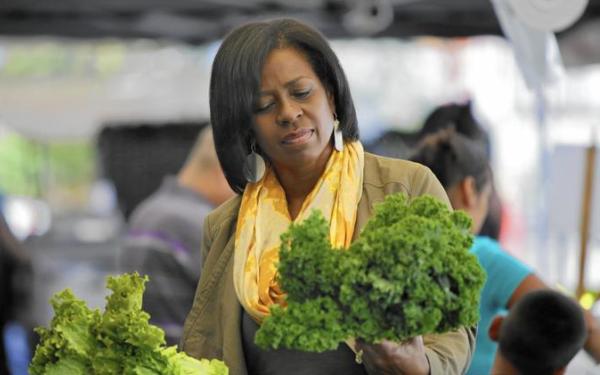 People in South Los Angeles have a complex relationship with their McDonald's, Taco Bells, Pizza Huts and KFCs.

Now, as evidence mounts that the Los Angeles City Council's ban on new fast-food restaurants is so far failing, leaders and thinkers are again scrutinizing the role restaurants of all kinds play or could play in this historically troubled cluster of largely low-income neighborhoods.

Seven years ago, the city pushed through the nation's first ordinance to focus on public health and fast food, at least in part because a community health nonprofit had lobbied tenaciously for the regulation as a way to fight obesity — a problem that is typically worse in poorer neighborhoods.

But despite passionate arguments that the law would encourage healthier, sit down-style restaurants to come to the area, a Los Angeles Times analysis shows the food landscape here remains unchanged.

Fast-food outlets have continued to spring up while the places with wait staff that city leaders had hoped to attract have been slow to arrive. To make matters worse, a recent Rand Corp. study shows that obesity rates have gone up since the ban was enacted.

The ordinance has fallen short of its goal in part because it only prohibits new stand-alone restaurants, and not those that are willing to operate in strip malls or shopping centers.

Another flaw, critics say, is that its definition of fast food doesn't address health head-on. Rather, the ordinance limits the location of "any establishment which dispenses food for consumption on or off the premises, and which has the following characteristics: a limited menu, items prepared in advance or prepared or heated quickly, no table orders and food served in disposable wrapping or containers."

About the time the ban was imposed, however, the line separating one type of restaurant from another grew fuzzy, and "fast casual" chains such as Chipotle, Tender Greens and Panera Bread — known for marketing to the health-conscious — remain prohibited from opening stand-alone establishments in South Los Angeles under the current ban.

The ban, supporters say, was meant to be a stop-gap measure to buy time as officials crafted initiatives to lure the sort of restaurants that area residents want. But when Gov. Jerry Brown dissolved redevelopment agencies in 2012, the city lost one of its best tools for enticing developers to invest in blighted communities. Without the leverage of tax incentives and other city support, attracting new restaurants is tough, city officials and business leaders say.

To fight the stereotype that neighborhoods south of the 10 Freeway are poor and crime-ridden, Kenneth Lombard of Capri Capital Partners, which is revitalizing Baldwin Hills Crenshaw Plaza, shows potential investors Baldwin Hills, View Park and Ladera Heights — some of the richest African American enclaves in the country. So far, he has had limited success.

Councilman Herb Wesson attempted to loosen restrictions in his district, arguing that the ban was discouraging development. Dozens of residents swarmed a Planning Commission meeting to protest weakening the ordinance. Wesson backtracked.

From 2009 through 2014, the roughly 32-square mile area covered by the ban gained 86 restaurants, a Times analysis of Los Angeles County Department of Health records shows.

More than half of those new locations, however, were on or near USC. That academic enclave's population of students, professors and administrators more closely resembles the demographics of upscale Westwood than those in poorer or working-class parts of South Los Angeles.

Excluding that Trojan turf, the changes made little difference in the overall food profile. Three Tam's Burgers, two Kentucky Fried Chickens, a Domino's Pizza, a Tom's Jr. and a Daily Donuts vanished from the landscape, but a Jack in the Box, a Carl's Jr., a Golden Bird, a two Louisiana Fried Chickens and three Taco Bells moved in.

Several large sit-down restaurants closed, among them Babe's & Ricky's Inn, New Orleans Vieux Carre and Elephant Walk. And a few new places opened, including Buffalo Wild Wings and Post and Beam, a restaurant with its own produce and herb garden that quickly became a magnet for the area's movers and shakers and young professionals.

But the critical mass of restaurants that draw people out at night to mingle and party in downtown, Boyle Heights, Koreatown and Highland Park has yet to blossom in South Los Angeles. As a result, people who can afford to dine out are left to drive to Marina del Rey or Culver City, and others are stuck with what they've got.

Drive down Crenshaw Boulevard's restaurant row, for example, and you will pass strip malls filled with discount stores, hair salons and plenty of opportunities to wolf down McNuggets, nacho grandes, buckets of chicken, Whoppers and jelly doughnuts.

Proponents of the ban admit that it has not been perfect, but say that it has slowed the proliferation of fast-food restaurants that would spring up in such dense clusters along major corridors.

"We're not against fast-food restaurants," says Gwendolyn Flynn, policy director for nutrition resources at Community Health Councils, the nonprofit organization that began pushing for the moratorium in 2001. "But we want more choices like other communities have."

"I don't think fast is a crime," Rosenfeld says. "Fast is the way we live. Unhealthy is what should be targeted."

But the challenge in addressing both individual and community health in South Los Angeles may well stem from de facto "red-lining" — an unspoken refusal to invest, at least in part because of racist and classist attitudes.

"My research has found banning fast food misses the root cause of unhealthy communities," he says.

Rather, he says, the systematic refusal of corporations and small businesses to invest more generally in some largely African American and Latino neighborhoods robs those communities of the employment and education opportunities, that, over time, encourage healthier eating and living.

Earl Ofari Hutchinson, a lifelong resident who lobbied for the ordinance, says that Los Angeles' concern about the lack of restaurant choices in South Los Angeles dates at least to the 1965 Watts riots, which were spurred in part by residents' outrage at a general lack of services in their neighborhoods.

"The ban is a short cut," says Hutchinson, president of the Los Angeles Urban Policy Roundtable. "That's the way around dealing with the deeper problem.. . . This is a community that is quality-food starved, quality-restaurant starved, quality-establishment starved. So as long as these problems persist, it's going to leave it wide open for fast-food influence because they fill a need in this community."

And that need extends beyond the basic human need to eat.

"Home is often crowded and sometimes noisy and sometimes it's not air conditioned," Rosenfeld says. "And if you have a large family in a crowded home, home isn't always such a nice place to hang out." As for work? Many people, he notes, can't wait to "get out of there."

"So the question becomes what is the third place?"

At a McDonald's in West Adams, children scream down the jungle gym's plastic tunnel slide as two women in scrubs spread textbooks and worksheets across the table as they complete their homework.

At another table, Omena Okeh, 19, unfolds her laptop and connects to the free Wi-Fi. The Los Angeles Trade Tech student says she often studies for nursing exams at the restaurant until midnight, when everything but the drive-through closes, because she does not have Internet access at home.

A few miles away, on Slauson Avenue, Alyce Turner of View Park stops at a Burger King with her two teenage grandchildren after picking them up from school. They were craving chicken nuggets, she says.

Turner settles on a vegetable burger, skipping the fries.