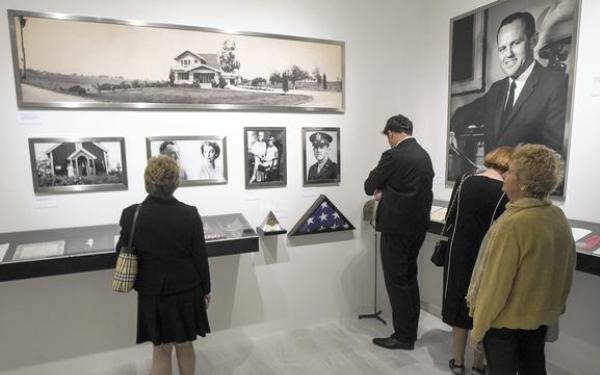 Guests view photos and memorabilia during the opening reception of "Courage of Imagination, A Tribute to Henry T. Segerstrom" at South Coast Plaza on May 7.
(Credit: Scott Smeltzer, Daily Pilot)

It occupies one corner of South Coast Plaza's new exhibit without fanfare, looking conspicuously grimy amid the gleaming cases and cordoned-off artwork.

The battered helmet, which Henry Segerstrom wore in Europe during World War II, resides on a metal stand with a folded-up American flag nearby. Without signage around the items, a visitor to "Courage of Imagination" might have to track down a curator to learn the story behind them.

"He was with a comrade in the Battle of the Bulge, and the man, his friend, was the radio man, so he carried all the radios," said Debra Gunn Downing, South Coast Plaza's executive director of marketing. "In those days, you can only imagine how big those radios were. They got caught up in fire, and so, in trying to escape that particular area, this man was injured, and someone was carrying him out.

"So Henry carried his radios, and when they got hit by artillery fire, it hit the radios. So it saved his life, really."

Segerstrom, who died in February at age 91, often emphasized his humble background — for example, by giving out bags of lima beans from his family's still-operating farm in Costa Mesa. The helmet, however, quietly downplays the developer in a different way: Before Segerstrom founded South Coast Plaza, before he laid the groundwork for the Segerstrom Center for the Arts and South Coast Repertory, he was among the many troops who barely made it home.

If a bullet or two had landed differently, Orange County might be a profoundly different place, as "Courage of Imagination" demonstrates. The exhibit, which will run until the end of this month in the shopping center's Jewel Court, touches on Segerstrom as a developer, art enthusiast and community builder — the last one perhaps best shown by a photo of the May Co. at South Coast Plaza in the 1960s, surrounded by a parking lot and an expanse of wide-open fields.

Nearby, another wall features advertisements for the upcoming retail haven, one of them sporting an image of the freeway with the tagline "Watch for parked cars." There were plenty of those outside the shopping center Thursday night, as South Coast Plaza hosted an invitation-only reception to kick off "Courage of Imagination." (It opened to the general public Friday.)

"The Segerstrom family have always been an integral part of this community," said Derek An, whose family owns the AnQi restaurant in South Coast Plaza. "They touch everyone's life in a different way."

According to Downing, each piece in "Courage of Imagination" was personally selected by the developer's widow, Elizabeth Segerstrom. Three of the items are sculptures from Segerstrom's famous art collection: Joan Miro's "Oiseau," Jean Dubuffet's "Tour Aux Jambes" and Alexander Calder's rarely displayed "Pekin," which was restored for the exhibit.

"It was something that, really, we feel characterized Henry, because Noguchi was not somebody who liked to work with developers or real estate people, and Henry was the first person that he felt so strongly about," she said. "And Henry pretty much gave him carte blanche. So it was a very special relationship.

"He thought, 'This man really does have a vision and a courage to do something that nobody else has done in Orange County.'"