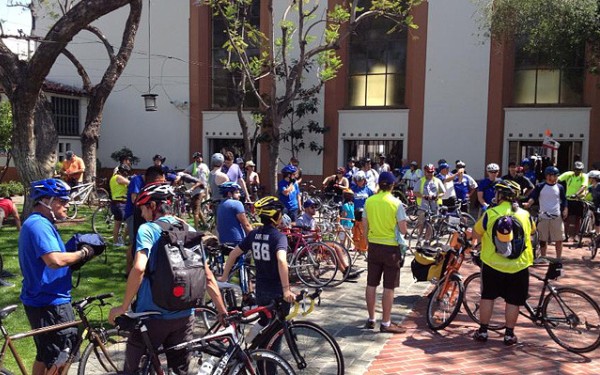 Bike Week, a nationwide event to get more people biking, kicks off Sunday with planned events such as “bike blessings,” nighttime rides and discounts at museums.

Whether the event draw first-time bikers or longtime cyclists, the goal is to help riders have a sense of community, said Aaron Paley, executive director of Ciclavia, a biking and pedestrian organization.

“You’ll get a chance to bike, which feels good,” Paley said. “And you’ll talk to people — you don’t get to do that if you’re in a car.”

On Sunday, numerous bike shops around Los Angeles are offering tune-ups for riders.

The official Bike Week L.A. kick-off rolls out at 10 a.m. Monday in downtown’s Grand Park, while Tuesday marks the 12th annual Blessing of the Bicycles from 8:30 to 9;30 a.m. at Good Samaritan Hospital, 1225 Wilshire Blvd.

More information about events, including Wednesday’s Bike-In Movie alongside the Los Angeles River — complete with bike valet parking — and Thursday’s Bike to Work Day, are available on the Metropolitan Transportation Authority’s website.

Councilman Mike Bonin, who chairs the City Council’s Transportation Committee and serves on the Metro Board of Directors, said he plans to take a “Bike to School Day” ride with West L.A. elementary school students next week.

Bike Week “is an opportunity for us to rededicate ourselves to making biking in L.A. safer and more convenient,” Bonin said.

The week comes amid efforts by Los Angeles City Hall and groups to fight hit-and-runs in the city.

Damian Kevitt, a bicyclist who lost most of his right leg after being hit by a driver near Griffith Park in 2013, formed an organization called “Finish the Ride” to help end hit-and-runs.

In time for Bike Week, his group launched billboards promoting safety for both pedestrians and bicyclists. According to Kevitt, Los Angeles is “200 years behind Europeans in terms of pedestrian and bicyclist safety.”

Bike Week events are also being held in Santa Clarita, including a “Bike to Work” competition put on by the city. The contest gauges worker participation among three categories: small (2-25 employees), medium (26-100) and large businesses (100 and more).

Special Feature
What would sports look like with smaller or no crowds?
121 views

Special Feature
He made most of his gap years: Capehart, 85, gets degree from USC after starting in 1952
189 views

Special Feature
The Pac-12 at a crossroads: morality or money?
1,083 views

Special Feature
Taking in a LAFC game is good for the sporting soul and stomach.
1,514 views