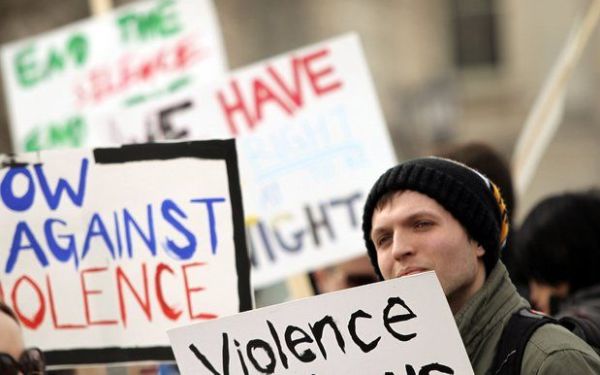 OAKLAND -- Shaken and anxious, Kendall Anderson didn't know what to expect when she arrived at the Oakland Police Department to meet with an investigator after reporting she was raped on a date. But she certainly didn't imagine being led into a windowless interrogation room with handcuffs on the chair, gruff questions about her virginity and the insinuation that she was confusing "rough sex" with rape.

The ordeal left the Mills College student even more traumatized, according to a complaint she filed with an Oakland police oversight panel.?

"I thought that there would be some sort of sensitivity," Anderson, 21, said of her experience in late 2013. "I was astounded."

What's remarkable about Anderson's story isn't just what happened in that room, but what she did about it -- and what happened next.

Anderson went public, filing a complaint with the Oakland Citizens' Police Review Board and then submitting a firsthand account to Salon.com, published in January, titled, "I wish I'd never reported my rape."

After reading the piece, the Oakland Police Department's chief of staff, Sgt. Holly Joshi, set up a meeting with Anderson and police Chief Sean Whent. Within weeks, the Special Victims Section -- which conducts sexual assault and human trafficking investigations -- created a "soft interview room" for victims, added training sessions for officers handling rape investigations, and created a form to make sure victims knew they could have a trained advocate by their side throughout the process.

(Joshi acknowledged that a meeting with a rape victim spurred the department to make changes but did not refer to Anderson by name, saying she was legally prohibited from speaking about a particular sexual assault case.)

"There's already enough areas where the victim could feel not supported," Joshi said. "There are so many places things can go wrong. The police department should absolutely not be a contributor to her not feeling supported. We have to be the safe place."

A vase of silk daffodils and a sailboat painting now greet victims when they enter the tiny but sunny interview room, a stark contrast to the dingy, windowless walls and institutional tile of the standard interrogation room right next door. Around the corner is a family waiting area with an alphabet mat and buckets of toys for children -- another new addition.

While interview rooms designated for adult sexual-assault victims aren't yet common, Palo Alto police use one, and San Francisco investigators will meet a victim at her home, a friend's home or a conference room at the station, depending on her preference.

As the Oakland Police Department trains its sexual-assault investigators, Joshi said, the department will stress the importance of "pre-interviewing" -- officers explaining to victims that they might have to ask some uncomfortable and invasive questions, and why it will help their case. They should also make it clear to victims that they don't have to answer those questions, she said, and that they can stop the interview at any time.

The problems Anderson brought to light "shook us all up," said Lt. Kevin Wiley, who runs the Special Victims Section. While he doesn't think the problems she described are systemic, he said, hearing about them was a "wow moment" -- a reminder that even well-trained investigators can get "locked into these processes" and forget the human element, causing further harm to the victim.

"You don't need to be victimized twice," he said.

The department has an open internal investigation into Anderson's complaint against Officer Bryant Ocampo, who is still working at the police department. The officer did not respond to questions from this newspaper and sent the inquiries to the department's media relations office.

Making victims feel more at ease is crucial for a broader and more elusive goal: bringing sex offenders to justice.

"We think that if we are ever going to stop rape we need to make the criminal justice system work for victims," said Scott Berkowitz of the Rape, Abuse & Incest National Network, "because rapists tend to be serial criminals and the only way to stop them is to take them off the streets."

Department of Justice surveys have consistently found that about two-thirds of sexual assault victims never report their attacks to the police. In a survey of college women released in December, that figure was a startling 80 percent; nearly half said they were afraid of retribution or that they felt it was a personal matter.

Having skilled and sensitive investigators with an understanding of how trauma can affect a victim's memory or behavior could encourage more people to come forward, Berkowitz said. And, advocates and criminal justice experts say, it is more likely to help a victim make a strong statement, which is often essential in cases with scant physical evidence and no other eyewitnesses besides the accused.

If victims feel uneasy or suspect the investigator doesn't believe them, they say, an effective interview is unlikely.

"People who feel comfortable in their surroundings and comfortable with their interviewers may be more likely to provide fuller, more complete answers to questions -- and that will help us uncover what is the goal of any interview: to find out the truth about what happened," said Lt. Zach Perron, of the Palo Alto Police Department.

Anderson's case was referred to the district attorney's office but never prosecuted. She said she was told the defense would likely argue the act was consensual and question why she waited two days to report the crime.

The accused refused to speak to investigators and was never arrested.

While she still believes the legal system failed her, Anderson said, she feels like she's gotten a different kind of justice.

"I've actually been able to get through to the police, and change has been made," she said. "And I fear that if I didn't speak up, how much longer this would have been going on."