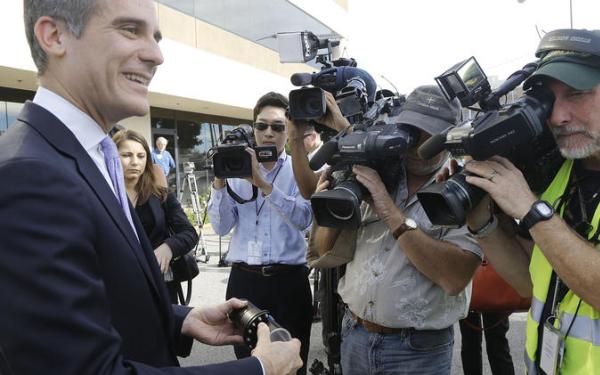 In 2008, a 7.9 earthquake left a path of destruction in the Chinese province of Sichuan, leveling whole communities and leaving as many as 88,000 dead.

The chaos and confusion was made worse because the temblor disabled more than 2,000 cellphone towers, leaving huge communication gaps that lasted weeks.

On Friday, Los Angeles became the first city in the nation to approve seismic standards for new cellphone towers, part of an effort to strengthen communications infrastructure in preparation for the next big quake.

The proposal, passed by the City Council on an 11-0 vote, takes aim at one of the great unknowns in earthquake country: How will mobile technology fare?

There has not been a major quake in California since cellphones, smartphones and WiFi became ubiquitous. When the destructive Northridge quake hit in 1994, landlines still ruled and the Internet wasn't yet a central part of people's lives.

Officials acknowledged that the move is just the first step in addressing the vulnerabilities of the region's communication system. But they hope it will begin greater discussion about how to improve it when it is needed most — in the minutes and hours after a devastating quake.

The earthquake in Sichuan was a big concern, said U.S. Geological Survey seismologist Lucy Jones, because the region used similar building standards for cellphone towers as the United States.

“This is about earthquake functionality. It's about getting us back on our feet,” said Jones, who has served as earthquake science advisor to Mayor Eric Garcetti. The mayor proposed the new cellphone tower standards in a report released in December.

“This is really sort of a first time that, looking forward, we said the government's role goes beyond just saving lives, and has a role in making sure that our economy is up and functioning after a disaster,” Jones said.

The fragile nature of the cellphone system became clear during previous earthquakes, even when towers weren't physically damaged.

The relatively modest magnitude 5.5 Chino Hills earthquake in 2008 caused major problems with both cellphone and landline communications. Some mobile providers reported up to an 800% jump in calls, overwhelming the networks.

The same thing happened after the 2011 Washington, D.C.-area magnitude 5.8 earthquake. Many customers struggled to make calls but were still able to send and receive text messages.

The impact from larger quakes has been even more dire. Many users lost cell service after the 2011 Japan earthquake because of damage to the system and power outages.

The new law will not require a retrofit of existing cellphone towers. Retrofitting an existing tower would be as expensive as building a new one, according to the mayor's report.

As a result, the mayor suggested focusing only on new cellphone towers, which would increase construction costs by 10% to 20%.

Another limitation of the law is that it won't apply to new towers attached to buildings, which currently make up about 60% of cellphone transmitters in Los Angeles. Many towers are placed on aging structures that could be at risk of collapsing in an earthquake.

Making cellphone towers more secure won't help with another likely byproduct of a big quake: widespread power failures. Many cellphone towers have a battery supply that lasts as little as four hours, while critical towers have generators that can hold out for 48 hours.

A USGS report warned that power could be cut off for weeks should a magnitude 7.8 earthquake strike the San Andreas fault, rendering swaths of the cellphone network useless. When Superstorm Sandy hit the New York area, about 25% of cell sites in the worst-hit region lost service because of power outages.

“The issue of network resiliency as a whole is a monumentally important one for the company,” said Alexandra Krasov, spokeswoman for AT&T, which worked with Garcetti's office on the issue.

AT&T has already developed portable, makeshift cell towers that can be rolled out to locations that need additional help with coverage. They are used for major concerts and sporting events and can be set up in a disaster situation to handle unusually large cellphone traffic.

The cellphone law marks the first of a series of major earthquake safety improvements Garcetti has proposed.

The mayor also wants to require the owners of thousands of wooden and concrete buildings to retrofit them to prevent collapse. He has said he hopes the City Council will vote on a new law before the end of the year.

Some officials said the focus on cell towers is an important first step. Even getting a fraction of cell towers up to a higher standard could serve as a vital backbone after a quake, said Councilman Bob Blumenfield, who sponsored the mayor's proposal.

A robust cellphone system will be critical to understanding where the worst damage is located, and essential when many customers no longer have landlines. “It's going to help with identifying where the problems are,” he said.

Blumenfield acknowledged, however, that the law won't resolve all the vulnerabilities.

“A lot of the other policies about earthquake preparedness are more complicated,” Blumenfield said. “But here is a discrete, tangible step that doesn't need to wait for all that, that we can just take action on.”

Garcetti has proposed other arrangements to deal with communication vulnerabilities. He is working on an agreement with cellphone providers to share network and wireless Internet access with customers of other networks during an emergency.

He and Blumenfield are also working on other backup plans such as solar-powered, free WiFi that could be accessed at schools, libraries and recreation centers.