New record! Astronomers nail down distance to the earliest galaxy yet 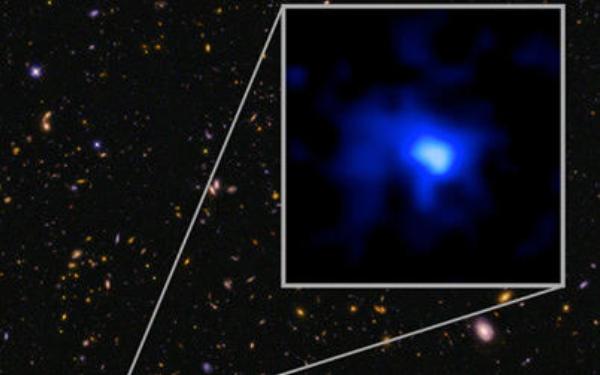 The galaxy EGS-zs8-1, the most distant galaxy yet seen, was discovered in images from the Hubble and Spitzer space telescopes.
(Credit: NASA)

A team of astronomers peering deep into the heavens has discovered the earliest, most distant galaxy yet, spotted just 670 million years after the big bang.

The findings, described this week in the Astrophysical Journal Letters, reveal a surprisingly bright and active galaxy that could shed light on what the universe, now 13.8 billion years old, was like in its formative years.

This study adds to mounting evidence that many young galaxies in the early universe were much more rambunctious than scientists once realized, said astrophysicist Steven Finkelstein of the University of Texas at Austin.

“The average galaxy should be forming fewer and fewer stars, but we're finding a population of some galaxies that are forming lots of stars,” said Finkelstein, who was not involved in the research. “That was unexpected.”

Capturing an image from a far-off light source is a way of looking back in time. When we glimpse the sun, we’re seeing a snapshot of what it looked like eight minutes ago. The same principle applies for the light coming from the galaxy known as EGS-zs8-1 — except that our snapshot of it is roughly 13.1 billion years old, a time when the galaxy was only about 100 million to 200 million years old.

“We’re actually looking back through 95% of all time to see this galaxy,” said Garth Illingworth, an astronomer at UC Santa Cruz who worked on the study. “It’s really a galaxy in its infancy … when the universe was in its infancy.”

EGS-zs8-1 is so far away that its light is exceedingly faint. Yet, as it now appears to astronomers, it’s forming stars at roughly 80 times the rate the much younger Milky Way does today. This precocious little galaxy has built up about 8 billion suns’ worth of mass, more than 15% of the mass of the Milky Way, even though it has been around for a tiny fraction of the Milky Way’s approximately 13 billion years in business.

One of the many challenges with looking for such faint galaxies is that it’s hard to tell whether they’re bright and far, or dim and near. Astronomers can usually figure this out by measuring how much the distant starlight gets stretched, or “redshifted,” as it travels across the universe to Earth.

The astronomers studied the faint light from this galaxy using NASA's Hubble and Spitzer space telescopes. But EGS-zs8-1 seemed to be too bright to be as far away as the Hubble data suggested.

To resolve this discrepancy, the team used the MOSFIRE infrared spectrograph at the Keck I telescope in Hawaii to search for a particularly reliable fingerprint of hydrogen in the starlight. This fingerprint, known as the Lyman-alpha line, lies in the ultraviolet part of the light spectrum. And indeed, they found the telltale line, though it had been shifted to redder, longer wavelengths during its epic journey to Earth.

With that settled, the team was able to put constraints on the star mass, star formation rate and formation epoch of the galaxy.

The Lyman-alpha line also revealed details about the process through which the universe’s haze of neutral hydrogen cleared up, a period called the epoch of reionization. As stars formed and galaxies filled the dim universe with new light, their ultraviolet radiation eventually ionized the hydrogen, allowing the once-blocked Lyman-alpha wavelengths to shine through.

Early galaxies such as EGS-zs8-1 are “probably the source of ultraviolet radiation that ionized the whole universe,” Illingworth said.

Scientists have looked for the Lyman-alpha line in other distant galaxies and come up empty. That might mean that their light was still being blocked by a haze of hydrogen that hadn’t been ionized yet.

“The fact that you actually see Lyman-alpha from the galaxy so deep into the epoch of reionization tells you it could be that reionization is really patchy,” Finkelstein said.

But it’s hard to say with just isolated examples, Illingworth said. If scientists can survey many galaxies from different points in the universe’s very early history, they can get a better sense of how reionization may have progressed.

“It’s when you have 50 that you can really say something about what galaxies were really like then,” he said.

As astronomers push the limits of current telescopes — and especially once NASA’s James Webb Space Telescope launches sometime around 2018 — they are sure to find galaxies that formed even closer to the birth of the universe than EGS-zs8-1.

“You don’t get to be record-holder very long in this business,” Illingworth said.

“This paper broke my record,” he said. “I was kind of waiting for it to happen.... I had it for about 18 months, which is pretty good in this game.”