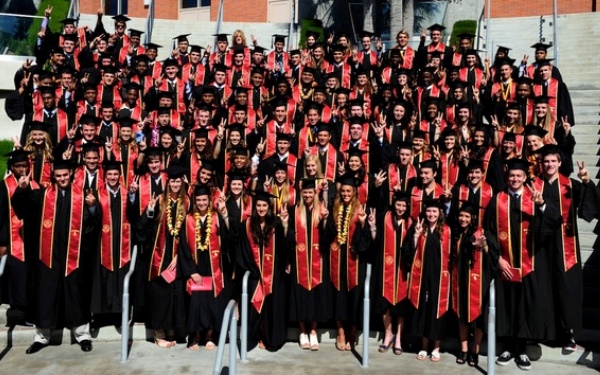 Approximately 15,000 degrees will be conferred during USC’s 132nd commencement ceremony on May 15. A number of the graduates, dispersed amongst the sea of cardinal caps and gowns, have already made a difference around the globe. Some have secured the world’s top academic fellowships.

Four USC seniors have been awarded Fulbright Student Grants, the flagship international fellowship program of the United States. Another USC graduate has been awarded a Boren Fellowship.

Other graduates, in continuing a long-held tradition at USC, may go on to earn fiercely competitive fellowships in coming years. Shinichi Daimyo ’09 is a recipient of the 2015 Paul & Daisy Soros Fellowship for New Americans. Daimyo is one of only 30 fellows chosen to receive up to $90,000 in funding for graduate study.

“The continuing success of our undergraduates in earning highly competitive international fellowships is another sign of USC’s ascent into the top rank of American research universities,” said Vice Provost Eugene Bickers.

Among this year’s outstanding graduates:

Yuen is an aspiring physician who double-majored in biological sciences at the USC Dornsife College of Letters, Arts and Sciences and health promotion and disease prevention studies at the Keck School of Medicine of USC. Yuen spent his time at USC researching the ecology of harmful algal blooms under Professor David Caron. He was president of the Asian Pacific American Medical Student Association and helped provide health screenings and medical education for inner-city youth. Yuen plans to pursue a medical degree at the David Geffen School of Medicine at UCLA in the fall.

Moore majored in creative writing and minored in American studies and ethnicity at the USC Dornsife College. She also worked on seven research projects. Moore earned a Mellon Mays Undergraduate Fellowship and SOAR Grant. Her fiction has won a number of accolades, including the Ninfa Sanchez Memorial Award and the Edward Moses Award. She was president of the Sigma Tau Delta English Honors Society and participated in the Saved by Grace Gospel Choir. Moore will attend Stanford University as a teaching fellow, where she will pursue a master’s degree in English education.

Natalie Tecimer, an advocate for hearing-impaired children, is graduating with a degree in international relations from the USC Dornsife College. Tecimer, who herself is hearing-impaired, is the president and founder of Ending All Roads to Silence (EARS). Her nonprofit organization provides hearing aids, cochlear implants, audiological services, physician care and speech therapy for deaf and hard-of-hearing children in India.

After confronting his mental illness and working his way through community college for five years, Joshua Ramirez is graduating with a degree in fine arts from the USC Roski School of Art and Design. As a volunteer at the National Alliance on Mental Illness, Ramirez was recruited to speak to educators about how to understand and interact with children with mental illness. He plans to find a job in the art field and eventually earn an MFA in sculpture.

Stefani Feldman will graduate from USC with a bachelor’s degree in music (performance clarinet) from the USC Thornton School of Music. Feldman has studied in Oslo, Norway, and British Columbia, Canada. She received a special invitation to play in the clarinet section of the Moscow Symphony Orchestra for one concert. As a Fulbright student, Feldman will return to Oslo to study clarinet and pursue a one-year advanced study program in performance at the Norwegian Academy of Music.

Maria Fish is the first USC student to win a Fulbright English teaching assistantship in Andorra. Fish, a double-major in Spanish and narrative studies in the USC Dornsife College, gained teaching experience from USC’s Joint Education Project and as a volunteer English teacher for the Isla Mujeres Alternative Spring Break. Fish was also a student consultant at the American Language Institute’s International Teaching Assistant Program.

Maracel Guevarra is graduating from USC as a double major in East Asian area studies at the USC Dornsife College and animation and digital arts at the USC School of Cinematic Arts. Guevarra was awarded a Fulbright study grant to South Korea, where she will pursue a master’s degree in screen culture studies at the Korea National University of Arts and seek an internship at a Korean animation studio.

Andrea Valenzuela, who has completed her master’s degree in higher education administration at the USC Rossier School, is the recipient of a Fulbright English teaching assistantship. Valenzuela will teach at a public school in Mexico, where she plans to familiarize herself with the college application process and financial aid system for Mexican universities. Upon her return to the United States, Valenzuela hopes to work with underrepresented, low-income and first-generation students in higher education.

Jackson will graduate with a master’s degree in public diplomacy from the USC Annenberg School. As a Boren recipient, Jackson will be provided up to $30,000 to conduct independent research in Malaysia, where he plans to join the ASEAN studies program at the University of Malaysia. Jackson’s research will focus on how Southeast Asian regional integration affects Malaysian policy on equitable development, freedom of expression, migrant worker rights and the rights of women and children.

USC’s commencement ceremony will feature an address by Mellody Hobson, president of the Chicago-based money management firm Ariel Investments. Click here for a list of satellite ceremony speakers or go to commencement.usc.edu for more information.