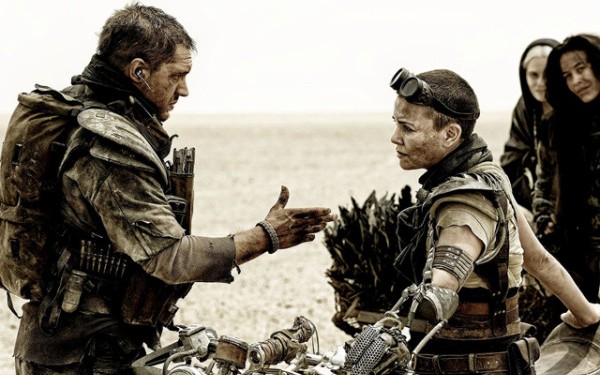 The action genre was traditionally dominated by male protagonists while the female characters were relegated to the sidelines. This started to change in the 70s with Angie Dickinson in Police Woman and Pam Grier in the 70s blaxploitation films. Though it was derisively called 'jiggle TV,' Lynda Carter in Wonder Woman and the women of Charlie's Angels were the protagonists while their male counterparts were the supporting players.

The trend of female action heroines really picked up speed in the 80s and and beyond. Sigourney Weaver played one of the quintessential action heroines in Aliens. Linda Hamilton buffed up for her bad ass role in Terminator 2: Judgment Day. Michelle Pfeiffer proved you could be tough AND sexy in Batman Returns. Meryl Streep played way against type in The River Wild. Angelina Jolie has become the go to action heroine with her roles in the Lara Croft films, Mr. and Mrs. Smith, Salt and Wanted, while Michelle Rodriguez is just as tough as the boys in the Fast & Furious franchise.

Though Charlize Theron has played tough women before in Aeon Flux and Hancock, she really ramps it up in her latest film, Mad Max: Fury Road. In the film, she plays Furiosa, who, along with Max (Tom Hardy) are in the race of their lives as they try to rescue five women from their warlord captor before him and his army kill them all.

Charlize recently discussed what it's like to play a powerful character, girl power, the freedom that comes with shaving your head and more.

Q: Should the movie be called Mad Maxine since you’re the baddest person onscreen? And why did you take the role?

I’ve spent a lot of time the past few days talking about this movie and I’ve realized how fortunate I was to have [director] George [Miller] trust me and give me this role. [As an actor] you’re really only as good as the opportunities that are handed to you. I watched the movie a couple of weeks ago and I found myself so incredibly grateful to have been given this opportunity. And what was the other question?

I like Furiosa. That’s a pretty bad ass name. I’ll stick with that one. It’s funny, but you get a name in a movie. Just like [in life], we all have names [laughs]. What was so interesting about the names that we had is that the movie is so bare in its explanation of where these people come from and who they really are. You already find them in the midst of the movement. I thought there was something really powerful about the name because it really sets you up. You didn’t have to know anything about her. Her name alone said everything. Anything that was driving her emotionally was already represented in her name. And it’s just a cool name.

Q: How did your training for the role affect you? Especially in the scene when you find out that the ‘green place’ has disappeared, [your breakdown] is almost like a dance.

George has spent a lot of time in [the Mad Max] world and is fascinated by that world and knows a lot about that world. It was a huge part of my life. [As a former dancer] I had forgotten a lot about that. It’s been a long time since I’d been on stage telling stories with my body. I feel like I integrated [my dance training] in my work, but the movie took this to another extreme.

As actors, we were fighting [the lack of dialog] tooth and nail out of fear. Language is a crutch. Dialog is a crutch. It’s easy to have a great writer write you a line and George was adamant about keeping everything on track with keeping the world so barren. This world is so barren and language is a luxury in this world. In the beginning, all of [the actors] were like, ‘can I get one line?’ Maybe after about five weeks of shooting, [the lack of dialog] became more second nature. When I watch the movie now, it’s clear that that was the right way to tell [the story].

Q: In big action movies, there’s usually just one female. In this movie, there’s a slew of them. How do you feel about the whole girl power thing in Mad Max?

I don’t get to make a lot of movies with other women. I was surrounded by women and it was like a breath of fresh air. I think George has an innate understanding of what women mean to society and he wanted to reflect that in a post-apocalyptic world in the most truthful way possible. It’s interesting doing these press junkets and people come up saying, ‘strong women [this], strong women [that].’ It’s like, ‘actually we’re just women.’

We had a filmmaker that understood that the truth of women is powerful enough. We don’t want to be put on pedestals and made to be super unnaturally strong – capable of doing things that we’re not capable of doing. What we are capable of doing is really interesting and really informs a story like this especially. The idea of creating a world and understanding that the easy thing to think is, ‘yes, for procreation, you’re going to need us,’ but there’s so much more to it.

I was so touched by this character. It’s not really explained in the movie, but George and I spent a lot of time talking about how she’s the most broken woman you can imagine. Socially, she was a disappointment [since she’s unable to have children], so she’s been discarded. In being discarded, I could see George saying, ‘now I’m going to show you a real woman. I’m going to take this broken woman and show you what a real woman is.’

She was unable to deliver what was expected of her. She was stolen as a young child and brought into an environment and thrown into a breeding program, but she was barren and she couldn’t do the things that she was supposed to do as a woman. Then she ends fulfilling her destiny in the movie, which is just to be herself.

Yes and no. It’s a complicated question. I think it’s not so much as quantity, it’s that [women] want quality. I remember when there were loud whispers around town that George was going to recreate this world and [in a whisper] ‘he was going to create a female character and she was going to stand right next Max.’ At first you think, ‘that’s awesome!’ Then you think about it and you become a little skeptical and you’re like, ‘I’ve heard that before and I’m going to be the chick in the back of the frame in a push-up bra and a wisp of hair in my mouth.

That’s why I shaved my head – ‘no wispy hair!’ [laughs]. Then I met George and there’s just something about him and I really believed him. I think it’s the quality of this role, instead of just being the girl in these movies. I think women are just eager to be on an equal playing. I’m speaking for myself, but we don’t want to be put on a pedestal. We don’t want to be anything than other than what we are. I just want to [play] a woman, an authentic woman. In this kind of movie, you run up against the push-up bra scenario.

In a drama, you run up against the Madonna/whore complex where you’re either a really good hooker or you’re a really good mom. There’s that conflicted nature that’s such a big part of being a woman and it’s so missed in film and also just not celebrated enough in society. We’ve come across a filmmaker that really embraces [the essence of being a woman]. Should there be more of it? Hell yea. When [strong female characters] appear onscreen, we all respond to them so positively and they really cause a reaction. Why is that not enough of a reason to keep exploring that?

Q: You’re very glamorous so did you have to be dragged to shave your head? And do you recommend it?

I didn’t get dragged. The movie stopped and started at times and George and I had gone through various different looks [for Furiosa]. The more time we had, the more the story just informed both of us. As an actor, you just want to fit into the world [of the movie you’re shooting] and I didn’t know how to fit into this world. We weren’t trying to hide her as a woman, but she really melded into this underworld, mechanic kind of place where she was almost forgotten about as a woman. I wanted [a look] so that [Furiosa] could kind of disappear. I just didn’t know how to do that with a pony tail. The more we did that, the more I was like, ‘it’s still a pony tail.’

I had a press junket and my hair was really fried and I thought, ‘what if we just shave it.’ I was fully convinced so I called George. I probably woke him up and 3 AM and I asked him what he thought of that idea. At first he was really quiet and then I could hear him breathe. He took a deep breath and I took that as a positive [sign]. Then I found out yesterday he was very concerned about the shape of my head [laughs]. So about 45 minutes later, my friend Enzo brought me some buzzers. I was going to let him do it and he’s like, ‘you should do it.’ 45 minutes later, the hair was off and we sent a selfie to George and he wrote back, ‘awesome, [that’s] Furiosa.’

Q: Do you recommend it?

Yea! It was amazing because after that, I was 20 minutes early to everything in my life [laughs]. How much time do we spend on our hair? I think I emptied two garbage bags of hair products. There’s something very freeing in that. And it’s nice when you take away that part of your femininity and make it about something more than just your hair. But it’s also nice to have hair.