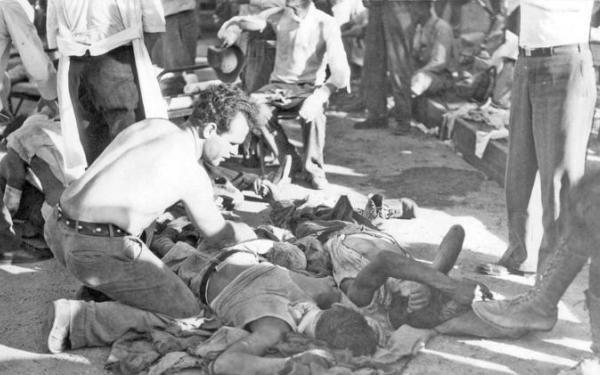 Men injured in the Griffith Park fire of 1933 receive first aid at an emergency station. The blaze killed 29 Depression-era workers who had not been trained in firefighting.
(Credit: Los Angeles Times)

In 1933, thousands of workers were widening roads and working on other projects in Griffith Park. When a small brush fire broke out, the workers, untrained in firefighting, were sent to extinguish the flames.

Then the wind changed and disaster struck.

In the end, 29 people were killed, making it one of Los Angeles' worst fire disasters.

There were efforts to create memorials for the lost men, but they didn't last long.

A month after the disaster, a plaque honoring the victims was placed by the Los Feliz Women's Club near the park's Vermont Avenue entrance. It eventually disappeared.

A bronze sculpture commissioned by the Works Progress Administration to honor Conservation Corps workers was dedicated in 1935 by President Franklin D. Roosevelt. It was destroyed in a flood three years later.

Finally, in 2007, the city honored the victims again with a tree planting that included a survivor from that day. The Times' Bob Pool reported:

The Griffith Park ridge top looked a lot better Thursday than it did the first time John Loa was there.

Happy schoolchildren were laughing this time in the cool morning air. A light breeze swept away the haze to make the view of Glendale's office buildings sparklingly clear.

That's not the way it was Oct. 3, 1933, when Loa and 1,500 other Depression-era workers were marched to the ridge top so they could fight a small brush fire that was burning in the canyon beneath the hill.

Loa returned to the ridge Thursday to help students plant the last of a row of 29 memorial pine trees honoring the victims of Los Angeles' deadliest wildfire.

Now 96, he posed for a picture wearing a modern-day helmet as young firefighters from Station 35 crowded around him.

"We were working down in the ravine when my crew chief called out to us, saying, 'You don't belong to that [work] gang. Get back up here,'" he recalled. "When we changed locations . . . our lives were spared. Later, we learned that the other crews we had been working beside had been trapped and lost their lives."

A history of the fire posted on the Los Angeles Fire Department historical archive noted that there was much debate about how the fire was started and who was to blame.

The Times speculated about a possible Communist plot, suggesting "the blaze was caused by some Red, some half-unhinged firebug or some person with a fancied grievance against society."

Those claims were investigated, according to the history. But in the end, most came to believe that the main cause was backfires unwisely set in hopes of halting the small brush fire.